Bill has been doing a tremendous job covering the candidates for Mizzou basketball's coaching search, but there's one very important candidate he left out.

Accomplishments: Noted businessman whose financial acumen led him to become the principal figure in the sweetest buyout in sports history. In only three years in Manhattan, matched the number of bowl appearances made by Kansas State from 1892 to 1982. Credited with coming up with creative ways to "get rid of the old man smell" in his office.

Before He Was a Head Coach: He bounced around from town-to-town distraught that Bell Biv Devoe wouldn't consider the VHS audition tape he sent them.

Ties to the Midwest: Ties TO the Midwest? Please. Ron Prince IS the Midwest. Born in Omaha. Raised in Junc City. He eats corn-fed beef and secretes American pride.

Ties to Missouri: Ron Prince loves the state of Missouri so much that he actively looks for any excuse not to leave. He loves the state so much that he'll stand outside in the pouring rain or in the freezing cold and call as many timeouts as possible while down 27 points in the final minutes just so he doesn't have to depart. If he's that committed to the Show Me State in bad weather, imagine what he could do in climate controlled Mizzou Arena!

Does He See Mizzou As a Destination Job? Only until he's offered a chance to reprise his role on the smash hit television program, Ron Prince TV Show.

Can He Recruit? YOU BET HE CAN (Disclaimer: High school athletes need not apply). Under Prince, Mizzou's roster will feature the best 11 JuCos he can find. Prince has got JuCos like they've got that B-Roll.

This Year's Recruits (i.e. Players Who Might or Might Not Come With Him): If you want size, Prince can bring it with him from his current gig as assistant OL coach for the Indianapolis Colts. Jeff Saturday still needs some work on his post moves and Ryan Diem can't hit free throws to save his life, but that'll come with practice.

Tendencies: The offense will consist of athletic players running square into the back of bigger players for the first two-thirds of the shot clock, followed by an errant pass to end the possession. Floors would also be immaculately dry, as Prince NEVER forgets to bring his towel.

Would He Come Here? Absolutely. With one stop down, Ron Prince's Tour of Secret Agreements has nine more Big 12 cities in which he can fleece athletic departments. In Pursuit of Perfection, LLC is coming for you, Columbia. Buy your T-Shirt now! 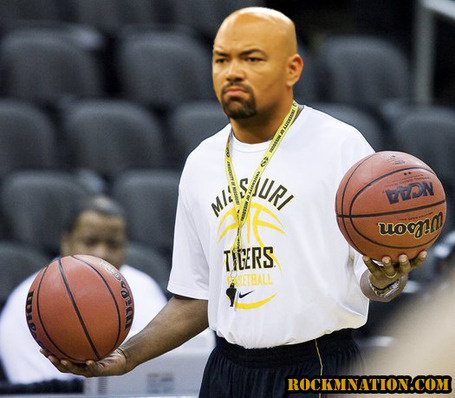