Football talk? Wha??  That's right, it's time to distract ourselves from the basketball coaching search for a little bit and return to the football walkthroughs.

The cornerbacks unit is one of the few areas on the 2011 Mizzou Football team that will not feature a rather significant level of experience this fall.  The departures of Kevin Rutland and Carl Gettis have to be considered a concern considering how vital a steady pass defense was for Mizzou in 2010.  But for a unit that officially returns zero starters, there is both a solid level of experience and a tremendously high ceiling.  You’ve got both top-notch athleticism in players like Kip Edwards, Tristen Holt, Robert Steeples and Xavier Smith, and you’ve got instinctive fighters in guys like E.J. Gaines and Trey Hobson.  If Mizzou finds two to three reliable options at this position, then they enter the fall with no single albatross-level weakness on defense. 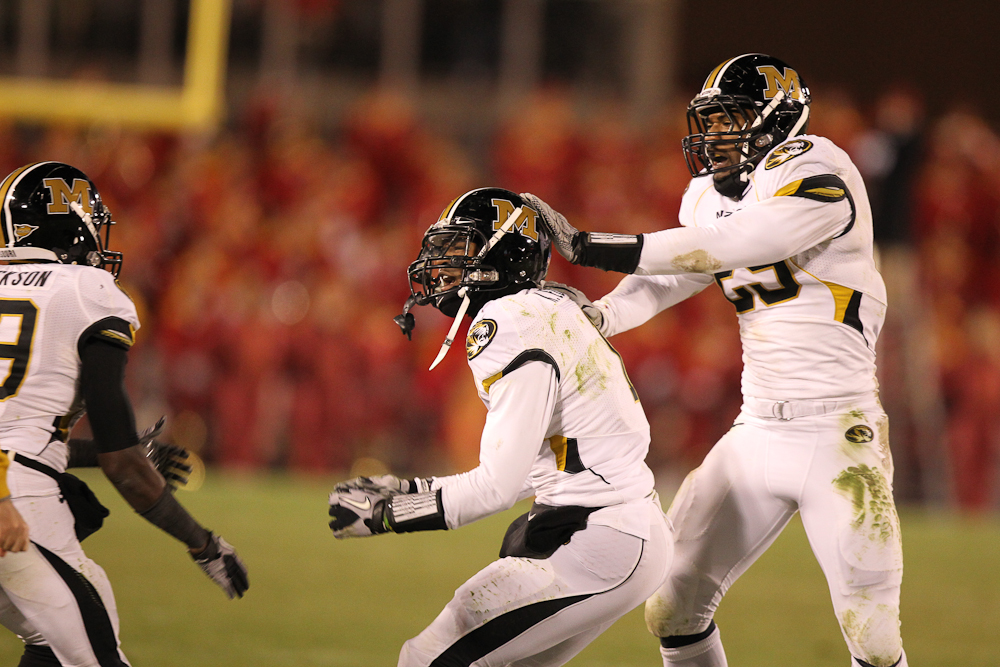 RPT: For the last several years, Missouri has made it a point to trumpet how the program is starting to recruit a higher caliber athlete at defensive back. It seems like athleticism and size are almost mutually exclusive at cornerback at the NCAA level outside of the top 5-10 percent of players, but Edwards really does provide a nice balance of the two. Edwards is the best of both worlds -- he’s 6’1", 200 without moving like he’s 6’1", 200. He’s extremely fluid, and perhaps best of all, he generally seems to be in the right place. Whether Mizzou just protected him by putting him in good situations or Edwards made it happen on his own, I'm not sure. But it certainly beats the alternative.

Bill C.: I think it means something that the coaching staff has gone out of its way to call Kip Edwards a returning starter because he got "starter minutes" last fall.  While Mizzou fans may be a little shaky worrying about the departures of both Rutland and The Carl Gettis Treatment™, the staff is clearly comfortable with Edwards manning one of those spots.  He has an all-around skill set that few Mizzou corners have had in recent years (decades?), and there is quite a bit about which Mizzou fans can be optimistic here. 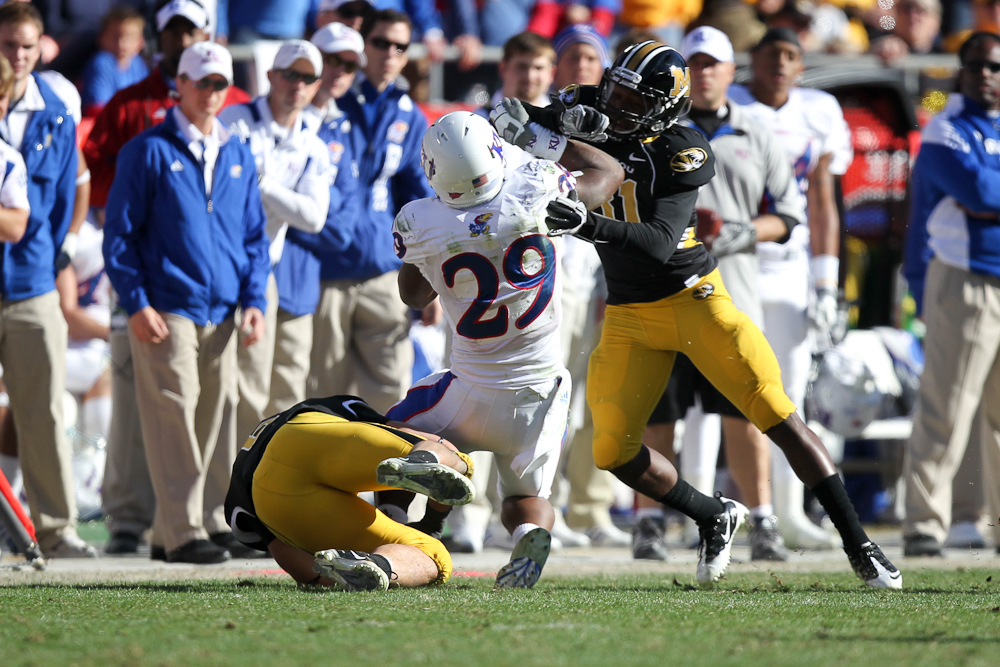 RPT: I’m not sure how much technical talk I have about E.J. Gaines. All I know is that there were a number of occasions I looked up and thought, "That was a nice play. Who was that?" The answer was often E.J. Gaines. Given the way Mizzou trusted him to step in at any given time down the stretch, I’m operating under the assumption that he has the inside track at one of the corner spots. And given what I saw from him in 2010, I’m totally cool with that.

Bill C.: While Kip Edwards plays somewhat like a prototypical cornerback, E.J. Gaines plays like a scrapper, somebody who’s always trying to prove something. He and Trey Hobson play a more physical brand of cornerback than the others in the stable, and early indications are that, despite youth, Gaines plays it better.  Gaines is unafraid of sticking his nose where it doesn’t belong; he’s a fighter and a fantastic complement to Edwards.  The only question, of course, is if he has the consistency and maturity to step up and start for a relatively mature defense. 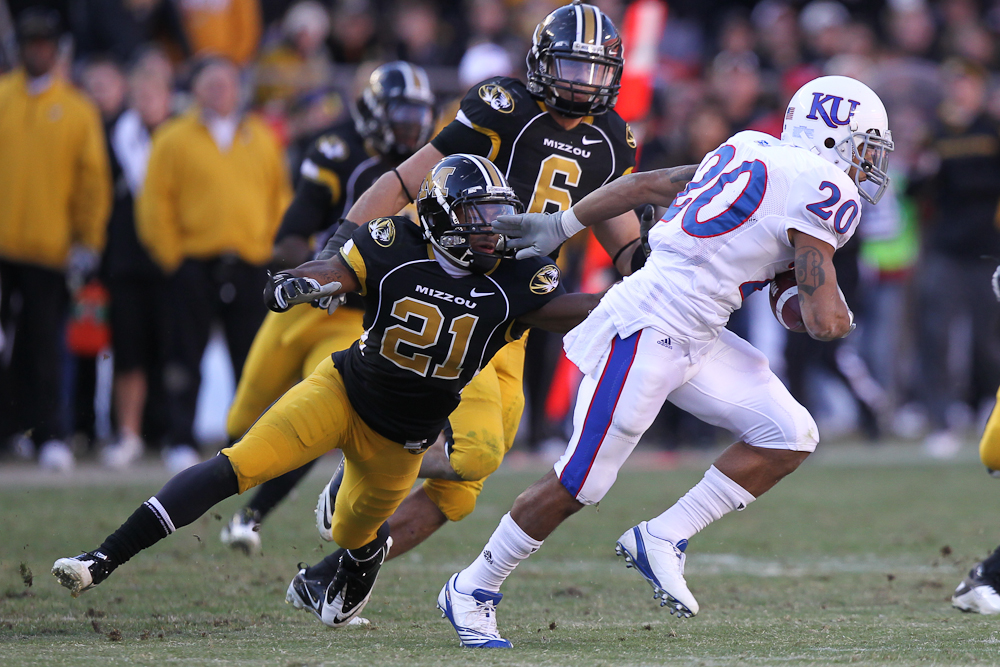 RPT: Who are you, Trey Hobson? It seems like we’ve been hearing and seeing contradictory things about Hobson for a generation. For three springs, we’ve heard "Hobson has been playing well and could factor into the mix this year" from reporters. But what we’ve seen has been, well, a whole lot of nothing. For what it’s worth, Hobson never appeared to have much of an opportunity behind a relatively deep group of corners in his first three years. The ladder to climb has never been shorter for Hobson than it will be in 2011.

Bill C.: Like Gaines, Trey Hobson put together some nice hits and plays on the ball early in his career, but he seems to have lacked the conservatism and play-by-play consistency required to break him into the rotation on a regular basis.  You can’t be a play-maker who gives up a ton of plays.  But as Ross said, he’s never had as direct a path to playing time as he does this year.  And I’ll be honest … I haven’t read his name a single time in practice reports this spring.  It looks more and more like Gaines will fend him off.  And there are youngsters on his tail. 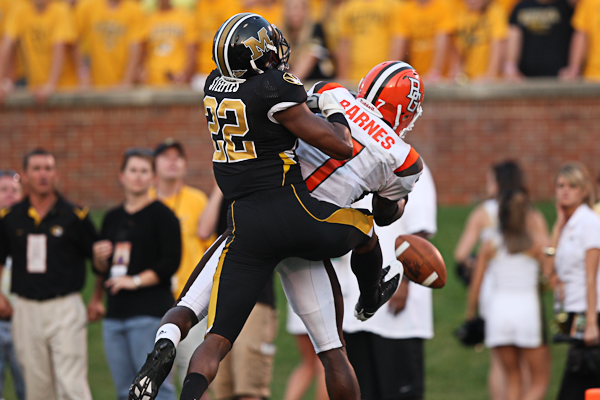 RPT: Bill led off Steeples’ portion of the 2010 Missouri Football Preview this way: "Steeples had an eventful redshirt freshman season." That much was very, very true. Steeples’ sophomore season was much less eventful in a good way for Mizzou and a not-so-good way for Steeples. Steeples really only seemed trusted by the MU coaching staff in the absence of Carl Gettis (and Mizzou is now permanently Gettis-less, obviously). Is he a candidate for the "junior leap," and how much of the 2009 struggles can be written off as freshman mistakes? If trust is the hardest thing to rebuild, he probably better start strong in spring ball.

Bill C.: Right now, it appears Robert Steeples is a great athlete who lacks true instincts for any one position.  He looks the part, but he is victimized in all the ways that iffy cornerbacks are typically victimized -- misdirection, double moves, etc.  Kevin Rutland proved that it’s better late than never for getting your s*** together.  If Steeples ever wants to see the field again, now’s the time for the leap.

RPT: With the graduation of Carl Gettis, Bill and I are in desperate need of a cornerback whose Fan Club we can co-chair. I can’t confirm that Bill is on the same wavelength, but I think Holt is Prime Candidate No. 1. I have no inside information whatsoever, but Holt seems like he’d be a fantastic option outside in the nickel set if Steckel felt compelled to matchup either Edwards or Gaines in the slot. And even if Holt can’t make an impact at corner, his impressive résumé of punt returns from high school may put him squarely in that mix instead. Whether on offense, defense or special teams, Holt is a smooth strider who seems to need no time to reach top gear.

Bill C.: I’ve got to say … I was completely ready to co-chair the THFC … but now he has to prove to me I shouldn’t go with the next guy on the list instead.  I’ve got enough love to go around, but I only have so much pure adoration.  (And yes, that made sense in my head.)

RPT: I won’t lie, I have NO idea what to make of Smith. Teams didn’t throw at him in high school, and as such, the highlight tape provided by Mizzou is about as revealing as a nun’s habit. Everyone who has seen him play live though says he’s the real deal, and I’ll believe that until told otherwise.

Bill C.: When healthy, Xavier Smith sure does seem to have made a lot of plays this spring (as has Holt, I believe).  Of last year’s incoming corners, he seems to be the bridge between Gaines the Fighter and Holt the Smooth Athlete.  If either Holt or Smith turn out well, and either Hobson or Steeples takes steps forward as an underclassman, this is a deceptively deep cornerback unit.  Those are attainable goals, if still "if"-related.

RPT: Missouri has brought in so many true defensive backs in the past few recruiting classes that a player like Johnson is a bit of an odd addition. He was a wide receiver for the first three years of high school, which may actually have played to his advantage as a defensive back. He was often lined up 10 yards off the line of scrimmage and allowed to read and react. What surprised me most was how fearless he seems to be as a tackler.

This could be a case where the black-and-white facts surrounding a situation -- "Mizzou loses both starters at cornerback!" -- do not hint at the overall level of quality and experience this unit takes into 2011.  But no matter how high the ceiling, one has to acknowledge that the loss of six years of starting experience (four for Gettis, two for Rutland) is a significant blow, and while the potential is here, the proven quality and/or reliability are not.  It is okay to have high hopes for this unit, but one must acknowledge that a brief step backwards is a strong possibility.