Today, we choose an inductee from the seven greatest (for different reasons) of the post-Norm era in Columbia.  We've got the interior beast, the sky walker, the European bull, the Kansas-killing Oregonian, the enigma, the pit bull and Mr. Big Shot.

His time in Columbia may have been brief, and Mizzou's performance may have been disappointing while he was here, but Linas Kleiza lived up to most of his five-star billing in two years.  Mixing a small forward's agility with a center's brute strength, Kleiza was one of the more unique recent Mizzou stars.  He was supposed to be the missing piece on the 2003-04 team that started the season ranked in the top five, and while the team underachieved, Kleiza averaged 11 PPG and 8 RPG in an injury-shortened season.  After the departure of Arthur Johnson, Travon Bryant and Rickey Paulding, Kleiza gave Mizzou's 2004-05 NIT team star power, averaging 16 PPG and 8 RPG.  Against 1st-place Oklahoma in the quarterfinals of the Big 12 Tournament, Kleiza was amazing.  He scored 33 points (he went a staggering 17-for-19 from the free throw line) and grabbing 7 boards in a near-upset.  He declared for the NBA draft after his sophomore year and was drafted in the first round.  Honestly, his resume is no worse than Keyon Dooling's, but his two-year stay was marred by team disappointment.  That shouldn't take away from the perceptions of his own quality of play.  He was a bull with finesse, and he was very fun to watch. 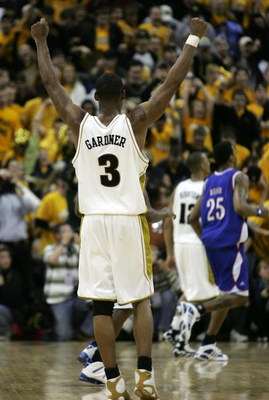 Score 40 points in an unbelievable overtime victory over Kansas and you make the list. In three seasons at Mizzou, Thomas Gardner, a guard from Portland, Oregon, displayed a flair for the dramatic. As a freshman, he sank a clutch three-pointer in overtime to help beat sixth-ranked Oklahoma State. As a sophomore, he christened Mizzou Arena with a 19-point, 12-rebound performance as the Tigers opened their new home with a win over Brown. Later that season, he sank two three pointers in overtime to give Missouri an upset victory over nationally ranked Oklahoma. And, of course, during his junior year, Gardner’s clutch shooting helped the Tigers overcome a seven point deficit in the final minute to stun Kansas in a nationally televised game. In three seasons, Gardner accumulated 1,067 points, thirty-third on Missouri’s all-time list.

From a turnover-prone, quirky, freshman bystander on one of Mizzou's worst teams in a long time, to the guy who posted two double-doubles in the 2009 NCAA Tournament (and had the key three-point play in the final minute against Marquette), Leo Lyons' career in black and gold was as unique as it was memorable. He seemingly matured on the spot during his senior season, and his postseason numbers actually outdid those of DeMarre Carroll. For his career, the former purveyor of Leo Lyons' Planet scored 1187 points, grabbed 566 rebounds, and improved from year-to-year in every regard. From eccentricities to clutch free throws, Lyons was memorable in every way a player can be.

Mike Anderson's first four-year recruit at Missouri, Tiller was the quintessential Anderson player. He played outstanding defense (2009 Big 12 Defensive Co-Player of the Year), scored key points (with an injured wrist, he scored 23 points in the 2009 Sweet Sixteen against Memphis), and exchanged skin for floor burns in every square inch of Norm Stewart Court. Tiller lacked natural offensive talent, but the effort level he showed in every second on the court was inspirational for teammates and fans, and off-putting for opponents. You weren't comfortable when Jesus Tyrannosaurus was on the court with you, and his growth from energy guy and role player to starter and difference-maker on teams that won four NCAA Tournament games in two seasons was both unlikely and fun as hell to watch.

How does a player who averaged 7.4 points per game in his Missouri career and only wore the black and gold for two years make the Rafters nominations list? By staking his claim as potentially the most clutch Mizzou player of all-time. In just over thirteen months, Taylor made four game-winning shots for Mizzou. His junior season, he followed an underwhelming non-conference performance by beating Texas with a driving layup on a Wednesday, then beating Kansas with a perfectly executed pump fake and pull-up jumper the next Monday. A year later, his killer 3-pointer buried Kansas State to start conference play, and his coast-to-coast drive against Iowa State in Ames clinched a second straight NCAA Tourney bid for the Tigers. A long-armed defender and one of the most calm, in-control guards Mizzou has had in a long time (he and Tiller earned the "Hustle and Flow" nickname for a reason), Taylor's journey from Staten Island, to Delaware computer labs, to Mizzou lore is one of the great stories in Mizzou history, and fans will be talking about his game-winners for a very long time.