The Wall of Excellence, Class of 2011: John Kadlec

Share All sharing options for: The Wall of Excellence, Class of 2011: John Kadlec

John Kadlec was in uniform when Missouri upset Doak Walker and SMU in 1948.  He was on the sideline when Frank Broyles succeeded Don Faurot, and when Dan Devine succeeded Broyles.  He was on the sideline again when Mizzou advanced to their last Orange Bowl in 1970 and pulled their epic series of upsets in the 1970s -- No. 2 Nebraska (in Lincoln) in 1973, No. 5 Nebraska in 1974, No. 2 Alabama (in Birmingham) in 1975, No. 8 USC (in L.A.) in 1976, No. 2 Ohio State (in Columbus) in 1976.  He was in the booth for the Flea Kicker game, for Brad Smith's debut (Mike Kelly: "Missouri fans, you've got yourself a quarterback." Kadlec, voice cracking: "WE have a quarterback."), for Mizzou's advancement to No. 1 in 2007, and for the Greatest Homecoming Ever™ last fall.

It is so cliche to say this, but John Kadlec is Missouri football history.  There's simply no way around it.

Hall of Fame Bio: A fixture in Mizzou athletic circles for more than 40 years, Kadlec, a native of St. Louis, was an all-conference linemen in 1950, and was the first to be pictured on the MU media guide that same year. He served as an assistant football coach at Mizzou under Don Faurot, Frank Broyles, Dan Devine, and Al Onofrio, and has been a Tiger administrator since 1986. He also served two terms of duty at Kansas State, as an assistant football coach under Doug Weaver, and as the Wildcats' chief fund-raiser. Kadlec currently serves Missouri as special assistant to the athletic director, and as color commentator on the Tiger Network.

Bob Broeg's Ol' Mizzou: A Story of Missouri Football was written almost 40 years ago, before the 1970s upsets, before the downfall, before the 2000s resurgence; even by then, Kadlec was a lifer, a source of quotes and verification, and a wonderful personality.

Kadlec, son of a Czech truck driver from St. Louis, went on to become a topflight guard at Ol' Mizzou after an unforgettable varsity debut as a green freshman at St. Louis U.  He came out of the game, vomiting, suffering the granddaddy of upset stomachs and for good reason. There being no training table, he naively had polished off at home before the night game a meal of sauerkraut and spare ribs.

When Coach Dukes Duford left St. Louis U., so did Kadlec, recommended to Faurot by Duford. Faurot got him a summer job, but the pudgy kid was homesick for St. Louis even before he was past Wentzville on the then three-hour drive down narrow old Highway 40 in Columbia.

He was given tuition and fees and a 50-cent-an-hour job as a dummy chaser, hauling the heavy apparatus in and out of the field house for practice. He paid $15 a month for a room and $32 a month for a meal ticket. Now, eating with the current varsity at the athletic training table, he considers Missouri athletes the best fed anywhere and quotes professional scouts who visit the campus. The truth is, John not only is prejudiced but also indiscriminate. There are some who say that John would eat anything that would not eat him first.

As a sophomore he ran afoul immediately of Faurot by permitting himself to get into a 50-cent blackjack game on a trip. The coach had a nickel limit. Faurot walked in and--.

"I said to myself, 'Oh, my god.'" Kadlec remembered with proper histrionics. "I wasn't thinking of the coach. I was thinking of my pop. He'd wonder what I was doing playing for a half-buck in the first place."

Kadlec could not believe the time Faurot and the Tigers put in at practice, from 3:30 to 6:45 p.m.  To make the Split-T dive play work at the goal line, Faurot would insist that his No. 1 unit score against a 15-man defense. And then, John recalled, Faurot would wind up doing sprints and chin-ups with the players.

"I was a little scared of him, but he was concerned about the players," said Kadlec, remembering the coach fussing to make certain Catholics like Kadlec had fish on Friday and inviting parents to eat with the players on the road.

He got on Faurot's good side enough to see the field extensively late in his career, earning all-conference honors as a senior in 1950. And then he stuck around.

From a 2011 MUtigers.com profile: Kadlec has been a Mizzou icon for well over a half century. He first came to Mizzou from his native St. Louis, Mo. to play football for Hall of Fame Coach Don Faurot in 1947. After earning his degree from MU, he stayed on as a graduate assistant coach for Faurot, and he coached the freshman team until 1954 when he moved up to varsity, where he served through 1959. After a stint at Kansas State from 1960-66, Kadlec returned to Mizzou to serve on the staffs of Dan Devine and Al Onofrio, coaching from 1966-77 on the Tiger sideline.

After his coaching days ended, Kadlec returned to Kansas State as Director of Development, before returning to Mizzou in 1986 as Director of the Tiger Scholarship Fund, and he's been a fixture in Columbia ever since in numerous roles most closely associated with fundraising. He was a 1996 inductee into the MU Athletics Hall of Fame, and in 2005, the grass practice fields behind the Mizzou Athletic Training Complex were named in his honor.

He was a player for Faurot, an assistant for Faurot, Broyles, Devine and Onofrio, a fundraiser for Woody Widenhofer and Bob Stull, and a color commentator for Larry Smith and Gary Pinkel.  The stories he could tell...

From a 2005 MUtigers.com profile: "I started out coaching with Coach Faurot and he would have to rank as my top guy because he gave me all kinds of opportunities," Kadlec said. "I was very fortunate, I don't think any assistant coaches have coached for three college Hall of Fame guys like I have. Coach Faurot, Dan Devine and Al Onofrio. They were all great coaches and wonderful men and wonderful people to work with."

Kadlec continued, "Out of those four, I can't really say one stands out. But Don Faurot really gave me the opportunity and brought me up as a pup. He kind of raised me. My experiences here, with these coaches has been wonderful." 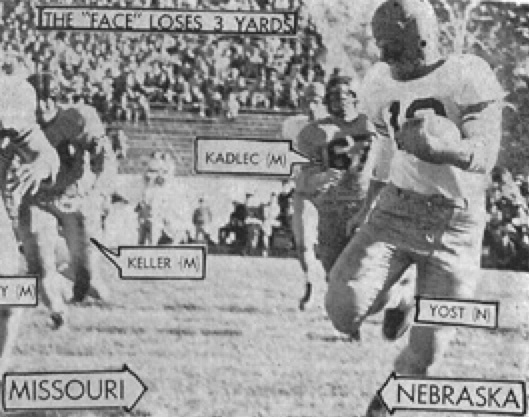