Rock, Flag and Eagle!less than a minute ago via web

Mizzou gained a half-game on first-place Texas this weekend -- the Longhorns split with Oklahoma while Mizzou whipped Oklahoma State and lost a game to rain out.  No word yet as to when MU-OSU might be rescheduled, but considering the standings, one has to figure it will be rescheduled. 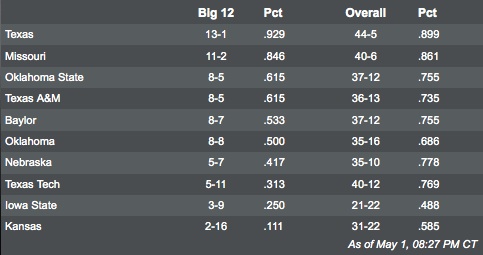 Now's a good time to point out that Mizzou hosts Texas for two games this coming weekend.

Don't look now, but Tim Jamieson's Tigers have gotten a little hot.  They won their second straight conference series by taking two of three at home against a really good A&M squad.  Overall, they've won six of their last ten, four of their last six in conference.  Still a ways to go here, obviously, but this is nothing if not a decent starting point.