I should have said this a few days ago (like, when April ended), but I just wanted to thank everybody for making Rock M what it has turned out to be.  After March was the most successful month in Rock M's history in terms of hits, April was the second-most successful.  I don't believe we have this sort of data, but I'm almost positive they were by far the most successful from a comments perspective too.  Granted, the coaching change had more to do with that than anything we actually did, but now that the hoopla from that has died down, our hits still seem to have settled in at a much higher rate than before.  Our community is more vocal than ever, more prone to (mostly enjoyable) conversation, and it rarely gets out of hand ... and that's awesome.  I know RPT wishes he could post more than he's currently in position to do, and I'm half-overwhelmed with getting the new site rolling (and Baby Girl C. isn't even here yet), but the community is carrying Rock M to an interesting, entertaining place, and I'm grateful for that.  So, uh, thanks!

Still waiting for Pressey to confirm he's staying on Twitter (because as we all know, nothing's official until Twitter says it's official), but it appears there was certainly some good news coming from yesterday's Frank Haith town hall at Brady Commons.  As I mentioned a while ago, I figured Phil would stay simply because his brother's still here -- the threat would come a year from now if Phil's not happy in the new system -- but it's still good to get that confirmed.  If we can just bring in another body to help crash the boards a bit (and to be sure, this guy might just fit that bill), I'm satisfied with where Mizzou stands for next year.

So Texas lost to Texas A&M last night, meaning Mizzou and the 'Horns are now tied in the loss column.  So uh, if you're not doing anything this weekend, there's a gigantic softball series taking place in Como ... Texas-Mizzou for the conference lead... 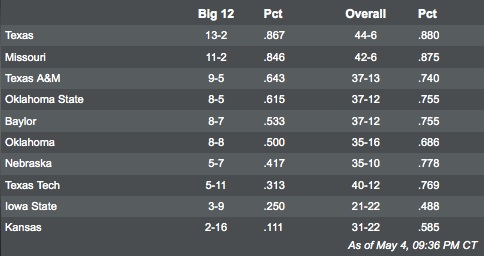