1 - Today, we begin the process of celebrating our pain with the M-I-Z... E-R-Y series at RMN.  The obvious candidates in today's Worst Loss field are, well, obvious; give me a less obvious nominee for one of the most gut-wrenching losses in your history as a Mizzou fan.  What's a game that possibly affected you more than it should have, or more than it may have affected the average Mizzou fan?  (Doug: replace "Mizzou" with "Kansas," though you probably knew that already.)

2 - Dave Matter had an interesting post yesterday looking at the "Class of 2001," the college football coaches who were hired that year and how they did.  Knowing what you know now, and taking expectations, sanctions, etc., into account, where would you rank Gary Pinkel among this list, in terms of pure quality of hire?

3 - Mizzou Softball is in the Women's College World Series for the third consecutive season.  For those of you who watched the games last weekend (or have tracked their play this year in general), what is your biggest concern regarding their overall chances this weekend and beyond?  (For Doug and those who didn't watch: is this so meta it's not meta anymore? Too meta? So many inside references that the world is going to explode?)

4 - Eddie Vedder has an album of ukulele songs out.  Give me an artist-instrument combination that would be even cooler than that.

Doug: 1 - The problem is there are a bunch of losses that sting when they happen, but I think I've managed to compartmentalize well enough that they don't stick with me. That said, the loss in the Elite Eight to VCU was pretty bad, but losses are apart of the game.

2 - He's at best 3rd behind Patterson and Richt. Patterson will also have a big chance to really pad his BCS bids once TCU arrives in the Big East. And, Richt playing in the SEC is much tougher than the Big 12, so he's done very well.

3 - The problem is, I don't watch Cougartown, so I can't comment to the effect on that show. However, it fits perfectly with Community, since that show is meta upon meta upon meta. For example, the "clip" show this season and the constant references to "The Cape" (Six seasons and a movie!) were beyond great. It's very similar to Pysch in many respects. The better question is, how will Abed incorporate the new mannerisms into his next season. That's when we'll hit meta-overload.

4 - Sting put out that album of medieval music with the lute. That was fun. How about, Dave Grohl with Nirvana's greatest hits on the harp?

Michael Atchison: 1. There’s no flagellation like self-flagellation for the Tiger fan.  Of those not mentioned, David Padgett’s buzzer-beater to close the Hearnes Center was certainly a kick in the unmentionables.  A much less obvious one would be for anyone who sat courtside in Municipal Auditorium in the waning days of the Quin Snyder regime and saw the Tigers get humiliated by Creighton and Houston.  Hopelessness in a bottle.

2.  Gary Patterson is the class of the group, for sure, and Mark Richt’s numbers are more impressive that I would have imagined.  Two years ago, Carroll and Tressel would have stood like titans above the rest, but I think they’re disqualified now.  Too much disgrace.  I think there’s a case for Pinkel being as high as third if integrity is important to you.

I’m going to be out a good chunk of the day.  I’ll do my best to check in periodically and hurl out random insults.

1. Remember when we all sat in Lot Brand X after the 2008 Oklahoma State game stunned, yet there was an almost eerie calm that couldn't be comprehended. For as shocking as that game was, that felt like Mizzou getting beaten rather than stumbling on itself, which is why I don't think we could work up the traditional Mizzou indignation. 2008 Kansas will always have a special place in the depths of hell. And for non-revenue sports, I still hate Louisville's Chris Dominguez from the 2007 Columbia Regional.

2. The real question here is whether or not some of these other coaches could have had the same success at Mizzou as Pinkel. Could Patterson's recruiting system still operate outside of Texas? Could Pete Carroll find a way to boogie board in the Lake of the Ozarks?

3. At this level of softball, there's always concern about the offense flatlining against top-tier pitching. My faith is still high in Hudson, Fleming, Simmons, SCHWEISBERGER, et al., but dropping 1-0 or 2-1 games in OKC is what scares me.

4. Eddie Van Halen on a mandolin?

Bill C.: RPT???  I KNEW continuing to throw you in on this e-mail would eventually pay off...

Michael Atchison: Maybe we can fill this Roundtable with RPT answering all the questions he has missed since his last appearance, starting with "Norm Stewart’s retirement blindsided most folks. Did you see it coming?"

RPT: Maybe I'll take it from "Is this the year Larry Smith has Mizzou competing in the Big 12? Will the South ever catch up to the North?"

ZouDave: 1 – Just about every loss to Kansas in football under Pinkel has been gut-wrenching.  In order, I’d say:

Others will include the loss to kansas in basketball in 2002 (I believe it was 2002) when we had the opportunity to beat them at the Hearnes center in the last game of the regular season to keep them from going undefeated in the Big 12.  We had them beat, then Hinrich hit a 725’ 3-pointer as the shot clock expired to tie and then Aaron Miles hit a line-drive three to take the lead, all in the last minute of the game.  That was devastating.  Then there was the loss the kansas in the last game of the Hearnes center.  I’m sure I’ll have comments for others choices, as well.

2 – Are we supposed to judge the hire by the school that hired them in 2001 only?  Or do we judge them by what they went on to do?  Because if we judge them by the entire body of work, obviously Urban Meyer and Les Miles move up the list a bit.

But going just by the school that hired them in 2001 and what they got out of them, in strictly terms of production ignoring anything else:

Taking into account sanctions, you obviously have to throw out Tressel and Carroll.  So I’d give the overall nod to Richt, who has had to compete with the uber-talented SEC for 10 years and is averaging 9-3 in that time.  Georgia obviously has a really good football tradition, but it’s not up there with the cream of the crop storied programs and if he hadn’t had success, he’d have been canned.  It’s very impressive what he’s done.  Patterson is in a perfect spot, and if he wasn’t at TCU but rather at any of the other schools on the list I don’t think he’s up nearly as high.  But he is, so he is.

But I would definitely be remiss if I didn’t once again point out that Miles and Meyer are obviously really freaking good coaches on that list, they’re just not still at the school that hired them in 2001 (or at the school they left for, for that matter).

3 – I have not watched much all year, I openly admit that.  But I watched both games against Washington and watched us against OU earlier this year, and the biggest concern I would have is our bats going to sleep.  We know what we have with Chelsea Thomas and it seems to me an ace of a pitcher can take you REALLY REALLY far.  Well, we have that.  So as she said in her interview during the 2nd game against UW, if Mizzou scores first she likes our chances.  So let’s score first.

4 – Billy Joel on the Recorder.

ZouDave: Other losses that stuck with me longer than they should have and/or were particularly tough to swallow at the time, in no particular order:

2003 Belmont (basketball) (really that entire week in December 2003 when we lost to Illinois, Memphis  and Belmont in the course of 8 days by a combined 7 points…it was a horrible omen for the rest of the season)

It’s harder for me to remember the bad ones in basketball, for some reason.  Maybe just because normally one loss in basketball isn’t quite so devastating unless it’s in a tourney.  That, and my memory apparently only goes back to 1997.

SleepyFloyd7: Hey boys, apologies for the latish entry. I have a co-host with Strep, and the workload is ramped up (man, it's like I'm a longshoreman or something over here!).

1 - I know it didn't sting like some of the others, but I might choose the 2008 game vs. Oklahoma State. MU was #3, Erin Andrews in the house, the boys were rolling. Mizzou had their chances, but they bounced off Denario's helmet and were intercepted by the Pokes. If you can believe it, it was the first time I'd ever seen the Tigers lose in person (they had been 16-0 when I was in attendance up to that point. What can I say? I moved here at a very good time.

2 - Carroll, Tressel, Patterson, Pinkel, Richt. Do you really think USC and Ohio State fans would trade those coaches and their respective successes for ones without incident? No way. Most fans are content to ride the wave and deal with the consequences later.

3 - I'm like you guys, the Offense has to be able to give Chelsea some support. We will be facing some VERY potent offenses, and while Chelsea is awesome, the margins for error are much smaller when it's down to the final 8.

Michael Atchison: "Ke$hsa as a mime" killed this thing?  Really?

C’mon people.  Think of the kids in the hospital.

Has anyone established the last thing Ehren Earleywine said before being tossed out of Sunday’s game?  Any guesses?

ghtd36: I have a guess. I'll give you a hint: it started with a parent.

ZouDave: I was picturing the scene in Bull Durham

RPT: How did no one place a prop pledge on Tremendous Ejections?

1. Earleywine was rocking tremendous Tremendous Stubble on the ESPNU press conference, in which Chelsea Thomas was the nicest, happiest person at the podium.

3. Because he's Berry Tramel, Berry Tramel asked a semi-dickish "What's up with the Pac-10, why do you guys suck so bad?" question to the Arizona State coach.

4. LOCUSTS. MY GOD, LOCUSTS. MAKE THEM GO AWAY. THEY'RE STARTING TO GIVE ME ORDERS, AND I MIGHT SOON FOLLOW THEM.

Bill C.: THEY'RE CALLING TO ME.  THEY'RE SAYING, "THIS ROUNDTABLE HAS SCREWED MIZZOU SOFTBALL."

Michael Atchison: Maybe a picture of Giada de Laurentis bathing in tomato sauce can save this thing. 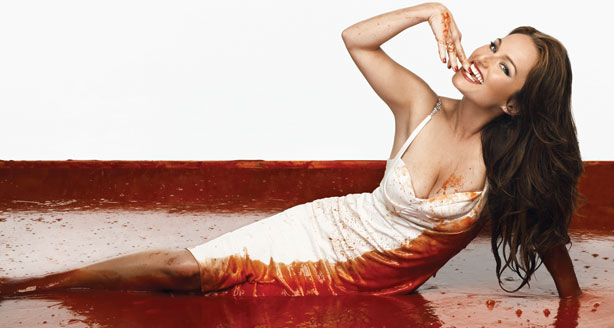 Bill C.: To me, the creepiest thing I've seen today is the hundreds of locust carcasses I had to walk over to get into my building. They're everywhere. And there are still millions more in the trees.

Michael Atchison: Anyone got a picture of Giada de Laurentis bathing in locust carcasses?

Just trying to be topical. 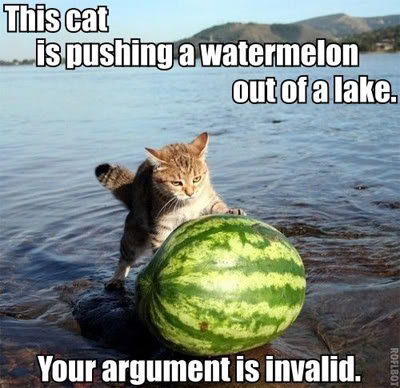 Bill C.: By the way, I'm using this as the Tweet, meaning we just went meta ourselves.

Michael Atchison: How about this?

As I just tweeted, the Southern Poverty Law Center is bewildered over which side to take.

ghtd36: If this roundtable is any indication, Mizzou is going to win the Women's College World Series because it's discovered that the other team is comprised entirely of clowns with lupus.