UPDATE: HA! Najera was in the bracket after all. By assuming I had screwed something up, I went out of my way to screw something up. Fix forthcoming.

First things first: there has been a change made on the bracket. Somehow I missed inserting Eduardo Najera somewhere, and this bracket just wouldn't be the same without him. So I'm replacing Aaron Miles with Najera. (I'm also spelling Kirk Hinrich's name right after managing to misspell both his first AND last names wrong in the last bracket. Direct all your Miles hate toward the 2004 Mizzou-Kansas game coming up tomorrow, and you'll be alright. Najera couldn't be ignored. 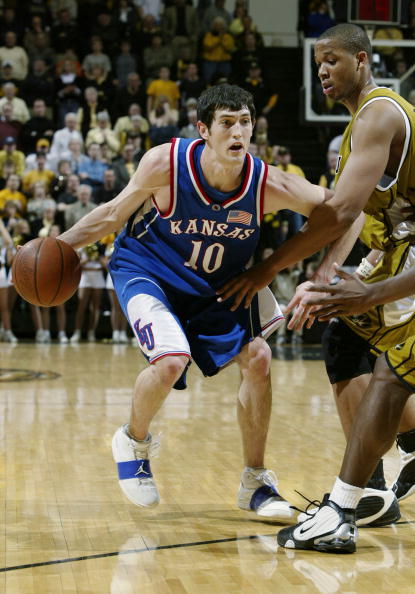 9 Mar 2003: Kirk Hinrich #10 of the University of Kansas Jayhawks dribbles during the game against the University of Missouri-Columbia Tigers at the Hearnes Center on March 9, 2003 in Columbia, Missouri. Kansas defeated Missouri 79-74. (Photo by Elsa/Getty Images)

It's official: Missouri fans hate white people. How else could somebody as good as Kirk Hinrich make this bracket?

Oh, because he played for Kansas?

And killed Mizzou with big shots?

In his final two games at the Hearnes Center in 2002 and 2003, Hinrich was just devastating. He played 73 minutes, scored 45 points, made seven of 12 3-pointers, and in his final shot in the building, he made about a 25-foot 3-pointer as the shot clock expired to give Kansas a lead they would not relinquish. Of all the ways Kansas has gotten Mizzou's goat in basketball through the years, winning their final three games at Hearnes was probably at the top of the list, and Hinrich was incredibly instrumental in two of them. And again, he looked like Alfred E. Neuman. Nothing is worse than being crushed by a guy who, at first glance, you think you could take in a game at the Rec Center. 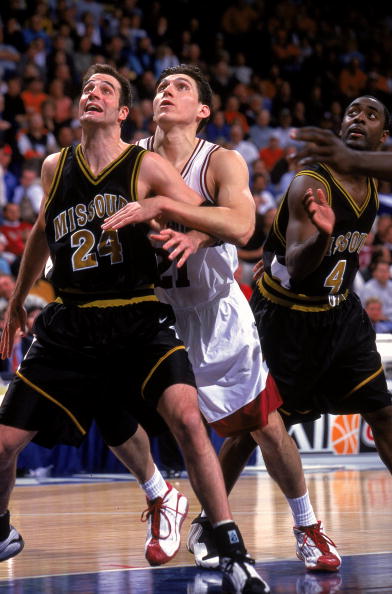 10 Mar 2000: Jeff Hafer #24 of the Missouri Tigers looks to rebound the ball as he blocks Eduardo Najera #21 of the Oklahoma Sooners during the Big 12 Tournament at the Kemper Arena in Kansas City, Missouri. The Sooners defeated the Tigers 84-80. Mandatory Credit: Jed Jacobsohn /Allsport

Eduardo Najera was so hate-able that it's a wonder he didn't play for Kansas. He fit the "your fans love him, opposing fans hate him" categorization, only he went nuclear with it. And, of course, no single moment encapsulated his relationship with Missouri fans more than the one that came in the first half of a game at Hearnes on February 15, 1999.

With 8:24 left in the first half, Dooling was on his way to electrifying the Hearnes Center crowd with one of his patented high-flying jams on a Missouri fastbreak. But instead of finishing off the play with a two-handed dunk, Najera hit Dooling from behind and sent him and the freshman careening into the basket standard.

Dooling hit his head on the padding at the bottom of the goal, and Najera slammed into the other side. Dooling was motionless for a few moments as a hushed crowd wondered if their star was seriously hurt. But Dooling shook off the cobwebs and even did a few push-ups before he got to his feet. Najera, who seemed to take the worst of the collision, also got up slowly.

The officials called Najera for a foul, but not an intentional foul like most of the 13,330 faithful had hoped. Until then, Dooling had ripped off seven points in helping MU take a 20-13 lead. But after the foul, Dooling only scored two points, and those were on free throws with 5:51 remaining in the first half.

The foul seemed to take the wind out of Dooling’s sails. He never attacked the basket the rest of the game.

When asked if he felt the foul was intentional, MU coach Norm Stewart said: "Yes. Completely."

Should Najera have been thrown out of the game?

"I don’t know, it’s whatever they want to call," Stewart said. "They didn’t rule it that way. They ruled in another way."

What about Najera’s overall play?

"I’m not going to compliment him," Stewart said.

I had actually forgotten that the play was NOT ruled an intentional foul. It was the most intentional foul in the history of intentional fouls. Now I'm mad all over again. And now I'm looking at the picture of him above and realizing that there's a 100% chance he was 0.3 seconds away from planting an elbow into Hafer's back and getting away with it. Now I'm REALLY mad. Screw him. Who's idea was this contest, anyway?