1 - So Missouri has scored commitments from four of the top eight kids in a loaded in-state class. Recruiting is certainly going well, and while there are plenty of other interesting names left on the board (Ondre Pipkins, the receivers from StL, about 36 offensive linemen from Texas), there are two huge names left: Dorial Green-Beckham and Gunner Kiel. If Mizzou could land just one of the two (and honestly, either both or neither is more likely, but go with me here), who would you choose, the No. 1 receiver and overall player, or the No. 1 quarterback?

2 - If Mizzou could land just one between Dorial Green-Beckham and Rodney Purvis, who would you choose?

3 - Tell me why I shouldn't be terrified for the future of US Men's Soccer.

4 - So let's say RPT has landed a new, high-profile, top-secret internship/opportunity. Is he...

The Beef: 1 - At face value, I go with the #1 overall player.  Looking at it with more of the details in play..I go with the #1 overall player, and it is not even close.  That the #1 player is from your state (though not necessarily your backyard) is a plus.  That we are in on a number of other QB’s helps as well.  But Gunner Kiel going to OU or Alabama wont come as a huge shock.  Kiel coming to Mizzou might raise a few eyebrows, but if only for a moment until people remember our QB success.  You get the #1 player, and people have no choice but to talk about you, and talk about you a bunch.  And while I wish nothing but the best for DGB (especially considering all he has gone through), I’d almost argue his value to the team is potentially higher as a recruit in signing than it might possibly be as an actual player.

2 - Wow…WOW that is a tougher choice than the last one.  Basketball can really turn with a star player, and Purvis would have the pedigree/rating to potentially be that star, and in such an important and transition year as well.  His signing would not be as discussed nationally as DGB’s would (I seem to have a thing for program exposure), but I might go Purvis on this one.

3 - I can’t.  Their lack of fire and finish quality last night was astounding.  They will have some tired legs going against Jamaica on Sunday and I really don’t believe they move past that match.  I think a change is needed, for as much as I think I like Bob Bradley…and for as much as I think the players like playing for him…I just don’t think he is properly motivating them at this point, as also evident by the myriad of slow starts we have suffered over the past few years.

I will be out of the office until Thursday, June 16, 2011.  During this time I will have limited access to email and will not be able to respond in a timely fashion.  If you require immediate attention please contact the [redacted] Help Desk at [redacted], or by telephone at [redacted].

So when you receive this, is there any doubt ZD was at the US Soccer Match last night and had thoroughly planned to try to burn Lawrence down again before getting back home from KS?

And what does the "P" stand for?

RPT: 1. Tough question, but for all of the reasons that aren't limited to on-field exploits, you need to get DGB before you get Kiel. Yes, getting the top-ranked quarterback in the class from out-of-state without any kind of special connection to the family or program would be a huge statement for the program and would solidify the most important position on the field. But how often is the state of Missouri going to produce the best player in the country? It has always been said that Pinkel has done everything in his power to once again lock down the borders. I'm pretty sure I'm in favor of building a wall around the state border to keep DGB here.

2. DGB. But you knew that already, didn't you?
/football first, and proud of it
//still love you, tiger basketball

3. Because it's no less scary than where US Soccer has been in the past? Is it going to get worse than '98?

Doug: 1 - Seriously... those are all made-up names, right? But, I think in Pinkel's offense, and frankly any college system, it's in your best interest to stock pile quarterbacks.

3 - I think Bradley may be a likeable guy, but going back to the 2010 Cup, I just remember watching a team that was so slow to get going, and once they did get moving would be playing against a one or two goal deficit. The vagaries of soccer officiating are such that you never want to be playing down more than one goal if you can help it, but the US, especially in knock-out play, comes out with such little focus early in games that it winds up killing them.

Bill C.: 1. From an exposure standpoint, I say DGB, but given the talent on hand I say DGB as well. You cannot have too many receivers for this offense, and considering James Franklin and Corbin Berkstresser are already going to be in uniform (along with whoever else we'd sign in this class if we don't get Kiel), I feel comfortable about the quarterback position. But yeah ... the thought of a 2012 receiving corps with T.J. Moe, DGB (who really is a real person, Doug), Marcus Lucas, Jimmie Hunt, etc.? With Jonathan Williams joining Lawrence, Josey, Murphy, etc., in the backfield? I'll take that.

3. Obviously since I asked the question I probably won't be able to give a quality answer. Like everybody else, I like Bob Bradley just fine ... and honestly, some of my problems go far beyond him. With each generation we're supposed to be developing more and better options ... and instead, we apparently can't do any better than Clarence Goodson at center back or Maurice Edu at midfield. I'm still optimistic about Altidore and Agudelo, and I think M. Bradley will continue to develop nicely ... and I know that injuries have crushed our depth (no Stu Holden, Charlie Davies still has some work to do, and Onyewu's legs have never seemed the same after his injuries) ... but yeah, with every match I watch, I think "Really? We can't do any better than ____?" at least three or four times.

With Bradley, though, a) the slow starts have long since become a "thing," and it obviously hasn't gotten any better, and b) for whatever reason, national teams really do seem to grow stale if they keep the same coach for too long. I was as seduced by Jurgen Klinsmann's super-specific diagnosis of the USMNT's problems after last year's World Cup, and I have long been all for handing him the reins and saying "do whatever you need to do," but it doesn't look like that's going to happen. I don't typically like change for change's sake, but when it comes to national coaches, it might be worth it.

SleepyFloyd7: I'm a little slammed this morning, and I have to get the caption semi posted, so I'll make this brief.

1 - If Missouri were able to grab the #1 QB in the country (FROM OUT OF STATE), Pinkel and his staff can pretty much take their pick of QB studs into the foreseeable future. That being said, give me the freak from Springfield.

2 - DGB - I think Haith & his staff will be able to court those high level guys. Pinkel scoring the #1 guy would quiet one of the remaining few questions about his tenure at Mizzou.

RPT: So, when's the last time you've shotgunned an $80,000 bottle of champagne while wearing your French teammate's goofy glasses? 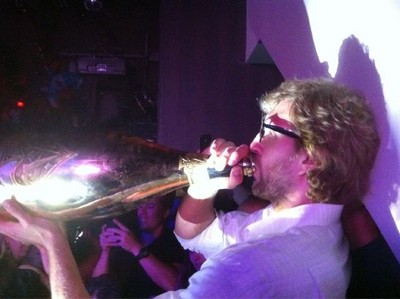 ghtd36: Will be late to the Roundtable, guys...because today's the drop date for the 52nd edition of Dave Campbell's Texas Football ($9.95 at TexasFootball.com!).

The Beef: How can you charge that much for a leaflet that says, "We’re better than everyone else."

3.  I watched last night, and Altidore’s mind-blowing strike notwithstanding, it was frustrating.  A couple of defensive lapses early and then the inability to capitalize on offensive chances after that (Clint Dempsey played like Rick Dempsey).  I really don’t know what’s in the talent pipeline, but the US definitely needs a couple of difference-makers.

D-Sing: 1. As long as we're staying in a pass first spread, take the quarterback. Not that a dynamic wide receiver doesn't help, but I'd rather have depth and security at the QB position. Kiel would be a freshman as Franklin is a junior, so either he'd beat him out or serve a nice apprenticeship.

(And those responses are why I'm a bad college sports writer; I could give less than a damn about recruiting.)

3. I wish I had an answer for you, but I just don't. The sluggish starts last year were disturbing, and from what I've been reading, things aren't going well now either. Maybe Bradley's time is done? Don't most soccer managers have a short shelf life?

4. He's either Pig Brown's personal assistant or going in the kitchen to make sammiches for other folks. Which I guess could be Intern for Co-Worker self-esteem, too.

And how does someone who works in IT only have limited access to email in this day and age? I thought IT guys all had iPhones....

The Beef: How is it that two weeks in a row D-Sing gets on here and DESTROYS it.  We are going to give this poor man a complex about participating

ZouDave: Thats just code for "I'm not going to bother checking my email so don't expect a response."

The Beef: Was I at least correct about your where-abouts last night?

ZouDave: I was there, all day.  My buddy nate wore a "green man" suit of the american flag.  He was in approximately 500 pictures.  It was awesome.

Heres the best picture of the day. 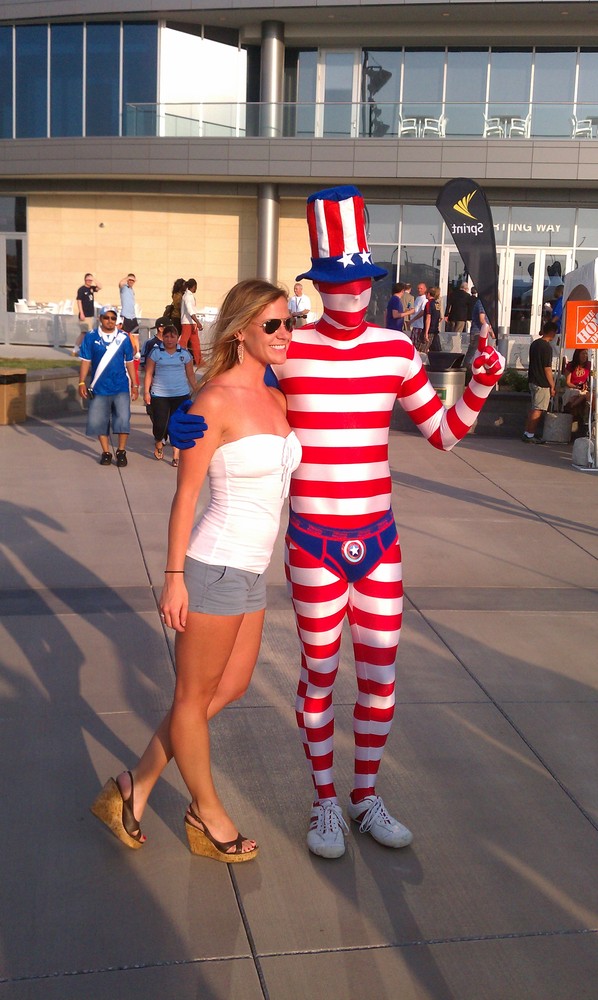 SleepyFloyd7: Long may she wave.

RPT: I'm a little surprised Presidential candidates haven't had to answer questions about whether or not they believe in the existence of Dave's sister.

Doug: It's kind of like Santa. You'll never get a politician to discuss the existence of either.

D-Sing: I feel so left out. In fact, I might be at the point where the myth of Dave's sister would never live up to the reality if I ever saw her.