Share All sharing options for: M-I-Z... E-R-Y: Them Crackers Shaking vs Oklahoma State 2008 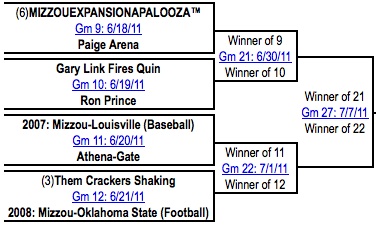 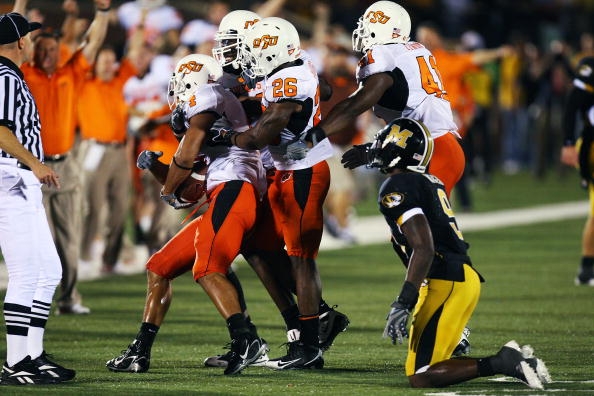 COLUMBIA, MO - OCTOBER 11: Patrick Lavine #4 of the Oklahoma State Cowboys is greeted by teammates after making an interception in the closing seconds against the Missouri Tigers on October 11, 2008 at Memorial Stadium in Columbia, Missouri. Oklahoma State won 28-23. (Photo by G. Newman Lowrance/Getty Images)

On Mizzou's opening drive, Chase Coffman (allegedly) came up inches short of a touchdown on second-and-goal, and Mizzou shocked everybody by kicking the field goal on fourth-and-goal instead of attempting to punch the ball into the end zone.

On Oklahoma State's second drive, it looked like Dez Bryant fumbled, but the play wasn't reviewed.

In the third quarter, with Mizzou driving, Chase Daniel threw a pass that Danario Alexander evidently lost in the lights; the ball bounced off of his helmet and into the arms of Ricky Price.

Later, Oklahoma State's Zac Robinson threw a bomb to a double-covered Damien Davis ... and neither Mizzou defender could find the ball to break it up; touchdown.

Despite all of this, and despite finding themselves down 28-17 with under five minutes remaining, Mizzou was poised for a comeback. With 1:40 remaining, they had the ball at OSU's 37, down just 28-23. Daniel rolled right and threw on the run to Maclin. Patrick Lavine stepped in and "intercepted" the pass, ending the game. Why the quotations? Because despite the fact that the replay upheld the call, photographic evidence suggested the ball had hit the turf before Lavine secured it.

The other day, we talked about Bill Simmons' "levels of losing" and how Texas 2004 was the perfect "Stomach Punch" game. OSU 2008 was really a combination of two levels:

Level XIII: The Rabbit's Foot
Definition: Now we're starting to get into "Outright Painful" territory. ... This applies to those frustrating games and/or series in which every single break seemingly goes against your team. ... Unbelievably frustrating. ... You know that sinking, "Oh, God, I've been here before" feeling when something unfortunate happens, when your guard immediately goes shooting up? ... Yeah, I'm wincing just writing about it.

Personal Memory: The Red Sox-Yanks playoff series from '99, when everything went against the Sox -- two potential homers bouncing off the top of the wall, egregiously bad umpiring, seeing-eye singles and bloop hits and everything else. After a while, you start battling that nagging, unshakable, "It's not our year" feeling, which takes on a life of its own and swallows your team whole. Nothing destroys a season faster than bad karma.

In 2007, Mizzou was the only team in the country who didn't lose a game they shouldn't have lost. In 2008, they lost two: this one and the Kansas game. Law of averages always evens things out, I guess.

Level VIII: The "This Can't Be Happening"
Definition: The sibling of the Full-Fledged Butt-Kicking. ... You're supposed to win, you expect to win, the game is a mere formality. ... Suddenly your team falls behind, your opponents are fired up, the clock is ticking and it dawns on you for the first time, "Oh, my God, this can't be happening."

Best Example: Round 2 of the AFC playoffs on Jan. 4, 1997, when Mark Brunell and the Jaguars stunned the No. 1 seed Broncos at Mile High. Watching that one on TV, you could feel the collective sphincter of the Broncos and their fans tightening as the game went along. This can't be happening, this can't be happening. Another great example: When Albert Pujols' famous home run off Brad Lidge staved off elimination in Game 5 of the 2005 NLCS, the Cardinals headed back home to "clinch" the series in St. Louis. Improbably, the devastated Astros fought off Dead Man Walking status and beat St. Louis in Game 6 in front of the shocked Cardinals fans (who were already making their World Series plans). At the time, I wrote that we needed to come up with a new level for that Cardinals' loss (The "Wait, That Wasn't The Plan" Game), but upon further review, it fell under the jurisdiction of The "This Can't Be Happening" Game. Please adjust your scorecards accordingly.

Personal Memory: Game 7 of the '82 Eastern Conference finals, when the Celts rallied from a 3-1 deficit to force a seventh game against Philly at home (just like they did the previous spring, when they eventually won the title). Not only had the Celts never lost a Game 7 at the Garden, during a Game 5 comeback that Wednesday, Boston fans chanted, "See you Sunday! See you Sunday!" at the Sixers' bench (inferring that the C's would win Friday's Game 6 in Philly, which they did).

Needless to say, our confidence had surged to dizzying heights. It never even entered our minds that we might lose. I remember seeing fans walking around the Garden wearing white sheets and dressed as "The Ghosts of Garden Past" -- an unreal atmosphere, certainly an impossible place for Philly to win. Um ... right? Unfortunately, Andrew Toney (one of the truly underrated NBA stars of my lifetime) had other ideas; nobody on the Celts could guard him. And you could feel that twinge of "Uh-oh" in the air, as we slowly realized things weren't working out like we had planned.