Alright, now we're talking. Everybody has rivals they hate ... but not every program deals with the incredible teases that Mizzou faced in today's two entries. 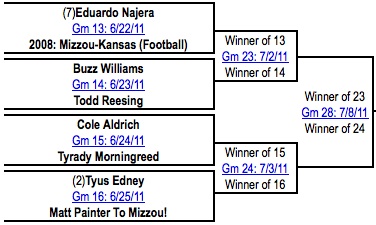 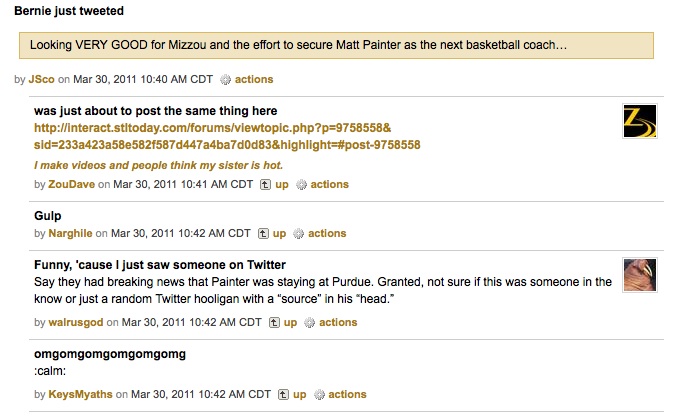 It takes a particularly vengeful, creative sports god to pull off what happened to the Missouri fanbase this past March and April. When Mike Anderson left Mizzou for Arkansas, that was nothing. Teams lose coaches all the time. Mizzou had (gasp) actually been rather lucky with this phenomenon over the years, having not lost a coach to another school since Frank Broyles took the same path to Fayetteville 53 years earlier. But the coaching search that followed was particularly unique.

Almost immediately after Anderson left, there were rumbles. Matt Painter might be interested in leaving his alma mater for Columbia. "Yeah, right," Mizzou fans said in unison. No fan believed it was a possibility. None. But that's where the Sports God got creative. He (or She, I guess) took something no Mizzou fan believed would happen, forced them to believe it would happen, then took it away. Mizzou fans went from "No way is he coming," to "Okay, but it's probably not happening," to "Huh, I guess there's a chance this might happen," to "OH MY GOD, IS THIS GOING TO HAPPEN?"

Mike Alden and a small entourage went to Florida to meet with Painter, and as they left, the rumors picked up even more steam. The morning of March 30, St. Louis' Bernie Miklasz heard from his sources (the same ones that told him Painter was legitimately interested in leaving) that ... never mind interest, this was all but a sure thing. Painter would be calling Mizzou to accept the job. It was going to happen. Mike Alden had pulled off an absolute coup. Mizzou had lost a good coach and replaced him with a potentially great one. Then KOMU's Eric Blumberg announced that sources had told him this was 100%. It was absolutely happening.

And then an hour later, Painter was announcing he was staying with Purdue. Oof.