Share All sharing options for: M-I-Z... E-R-Y: The Flea Kicker vs Northern Iowa

A kick that tamped down a surge, versus a lucky shot that punctuated a collapse. 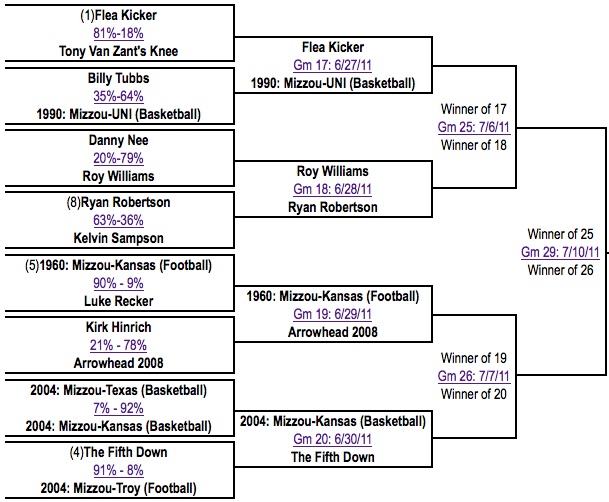 UNI jumped out to an early first-half lead of 22-8 on its way to 8-of-12 shooting from three-point range in the opening half. A Mizzou three-pointer just before the buzzer cut the Panthers' lead to 42-31 at the intermission, but the contest was far from decided.

The second half was a series of pivotal runs by each team. Missouri opened with a 7-0 run that closed the gap to 42-38, but the Panthers answered with an 8-0 run of their own. After seeing the lead stretched back to 50-38, the Tigers responded and trimmed the margin to 54-51. When Missouri's All-American forward Doug Smith fouled out, UNI answered yet again with another run that put them up, 65-53.

Missouri was not finished yet. They stormed back with 11 straight points to cut the Panthers' margin to one. A basket and two free throws by Jason Reese sandwiched All-American guard Anthony Peeler's only basket of the game. Trailing by three, Missouri's Nathan Buntin converted a three-point play to tie the game at 71-71 with 0:22 remaining in the contest.

UNI called a timeout on their possession with 10 seconds left, and Maurice Newby, known for his clutch three-point baskets in the AMCU tournament, checked in off the Panthers' bench. After the inbounds pass, Dale Turner attempted a drive to the basket and found Newby behind the arc. Newby launched his shot from five feet beyond the line and drained it with two seconds left to give the Panthers a 74-71 victory. The shot still stands as one of the biggest in school history.

Granted, UNI won back some goodwill by taking down Kansas in a similar fashion 20 years later ... and granted, Mizzou fans don't have to watch Newby's shot replayed over and over again every March ... but this was devastating. Less than a month earlier, Mizzou was 25-2 and ranked No. 1 in the country. But point guard Lee Coward broke his hand and Anthony Peeler was not a natural replacement. Mizzou lost by 17 to Billy Tubbs and Oklahoma and finished the regular season with a humbling, 31-point loss at Notre Dame. As the conference's No. 1 seed, they were upset by No. 8 Colorado in the first round of the Big 8 Tournament ... but all was not lost, right? They still had a No. 3 seed in the NCAAs. They could still take out Northern Iowa and Minnesota in the first weekend, aim for revenge over Syracuse in the Sweet Sixteen, and reach their goals, right? Nope. This was perhaps the most stark, swift collapse in Mizzou's basketball history, and it was capped by an off-balance dagger from the hands of a 14-seed.

And then Travis Ford elected to transfer.

And then Mizzou got put on probation and banned from the 1991 postseason.