Gary Pinkel: Bold or Not Bold?

Share All sharing options for: Gary Pinkel: Bold or Not Bold?

NOTE: This post is sponsored by Nestea, the company responsible for the attractive young woman that has recently graced the left side of Rock M Nation's pages.

To the thought leaders that govern narratives in the college football landscape, Gary Pinkel is many things. Bold may not be one of them.

Gary Pinkel is bold in the unsexiest of ways. In an unstable industry, Pinkel believes in the power of stability, the strength of hiring from within, and the value of trusting a philosophy in all circumstances. While college football punditry is fascinated with the unpredictability of the Mike Leaches and Les Mileses of the world, Missouri has slowly put its faith in a man whose "boldness" might be classified as marginal, at best.

Of course, this all isn't to say that Pinkel is immune to in-game boldness. Some might argue his predilection for always taking the ball on the coin toss represents a certain brashness. Others look for laminated charts to light on fire with every curious first half two-point conversion attempt.

Earlier in his Missouri tenure, Pinkel's in-game habits skewed slightly stronger in favor of the bold playcall, though it's hard to determine if that's attributable to a gambler's mindset or an underdog mentality. But just like every bold decision, there's been both the good and the bad.

The bad (after calling a timeout because the defense HAD YELLED OUT THIS EXACT PLAY CALL)?

But while the bold moments of most coaches stick out in the eyes of most fan bases, as we've learned from the M-I-Z... E-R-Y series, Mizzou's fan base operates a little differently. Instead, we agonize about the moments that aren't so bold. To this day, Jeff Wolfert's 18-yard field goal on the first drive of the 2008 Oklahoma State game remains (in the benefit of hindsight) one of the most-questioned calls of Pinkel's decade in Columbia.

Mizzou fans were ready to crucify Pinkel 14 months later, when facing 4th-and-4 at the 39-yard line while trailing Kansas by three with about three minutes to play, Pinkel elected to punt. Let's go to the Rock M Nation wayback machine to see how that decision was received: 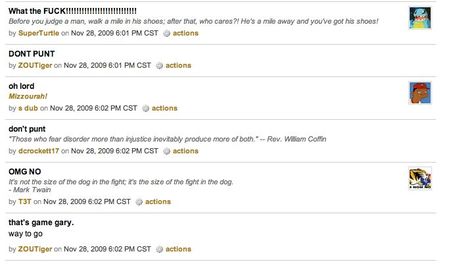 Then this sequence happened. And it was good.

And, thus, a bold decision on a not-so-bold playcall turned History Awaits into Gone Fishing.