A Bully For Bold Mizzou

Share All sharing options for: A Bully For Bold Mizzou

NOTE: This is the second of two posts sponsored by Nestea, the company responsible for the attractive young woman that has recently graced the left side of Rock M Nation's pages.

The subject for the week is boldness, so we figured it was a good time to celebrate some of the bolder players in Mizzou's history. 'Bold' can be so many things. It could be a scrapper, somebody unafraid of mixing things up. It could be a born leader, stepping up when the situation requires. It could mean playing through injury, or guaranteeing victory, or building a team's personality through your own.

Note that this isn't a "Ten Boldest" list because I'm pretty sure that, with your own definitions and guidelines, you could come up with ten totally different players. In fact, I encourage you to do just that in comments, or even in a FanPost. This is my list, and now I want to see yours. 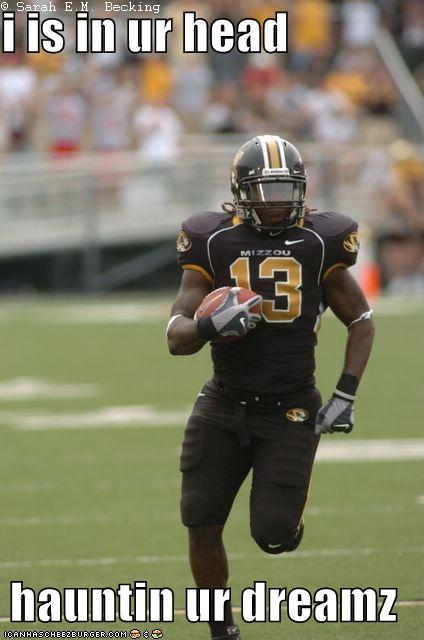 It's almost a cliche to mention Pig Brown in adoring terms on this site, but the fact is ... the dude was bold. He talked smack to former JUCO teammate Brent Schaefer before the Ole Miss game in 2006, then he went out and played ridiculously well in a blowout over the Rebels. He delivered the ultimate "tone-setter" hit on Nebraska's Maurice Purify in the first half of the 2007 blowout. He recovered two fumbles against Illinois and, when Mizzou was threatening to blow a lead, he pulled down the interception that ended the game. In his final full game as Tiger (sigh), against Texas Tech, he solidified what likely would have been All-American status in 2007: 14 tackles, 4.5 tackles for loss (as a safety!!), an interception and two passes broken up. That's incredible.

Pig Brown was such a leader that Mizzou's defense maintained his identity in his absence. Their best player went down, and the defense arguably got better; William Moore turned into the safety Brown had been, and the dream season continued unabated. Brown was a bold, occasionally brash safety, but he was also an incredible leader. He is a shoo-in for this list.

Has there ever been a Mizzou basketball player whose personality was more reflected in every single player on the team? He was the Fastest 40 Minutes, and he was the clear heart and soul on the best Missouri basketball team of the last 15 years.

The morning of Mizzou's home matchup with hated Nebraska, a team Mizzou had only beaten once in the last 12 years (the win came the year before, with him behind center), quarterback Paul Christman saw Mizzou mainstay Bob Broeg working at the Columbia Tribune and stopped by for a quick word.

The morning of the game, as always in those days, Faurot's team gathered at Harris's Cafe for peaches, tea, and toast, the traditional pregame meal.  Christman, accompanied by other Catholics on the squad, straggled in from Mass.  At the Columbia Tribune next door he stopped in, tapped me on the shoulder at my Associated Press typewriter and, cupping a backhand to his mouth, he grinned and stage-whispered:

"I'll give you a scoop, kid.  I'll pass those bums out of the stadium by the half."

I laughed.  Nebraska was favored after beating Bernie Bierman's Minnesota Gophers and Jock Sutherland's Pitt Panthers, both national powers.  Not only that.  One thing the Cornhuskers certainly would look for from Christman was the passing that dazzled them the year before.

Bold? Absolutely. Brash? Probably. But any negative connotations are forgotten if you back it up, and wow, did Christman do just that. With Nebraska prepared for the pass, Christman and Bill Cunningham ran all over the Huskers, and with Nebraska creeping back toward the line of scrimmage, Christman completed four passes in the first half ... for three touchdowns. Mizzou scored 27 points on a team that only allowed 43 in their other eight games. He told Broeg he would do it, and then he went out and did it.

Clarence Gilbert shot 3-pointers like Pig Brown delivered hits: with complete recklessness. He knew he might hurt himself in the process, but it was worth it if he had a chance to hurt you. When I began this list, he was such a no-brainer that I almost had to put him on here twice. He had an attitude that Mizzou would lack in the years after he left, and while it wasn't always good, it was always bold.

Through the years, how many Mizzou players, fans and coaches have felt the distinct urge to punch a Kansas Jayhawk in the mouth? Charles Henke did. He was the second name I thought of for this list. Kansas' Wayne Hightower threw a sucker punch after getting fouled at Brewer Fieldhouse in 1961, and Henke was more than happy to throw back. A proud moment in Mizzou history? No. (In the aftermath, Kansas' athletic director proposed ending the Mizzou-Kansas series because of the hostilities involved.) But also yes. 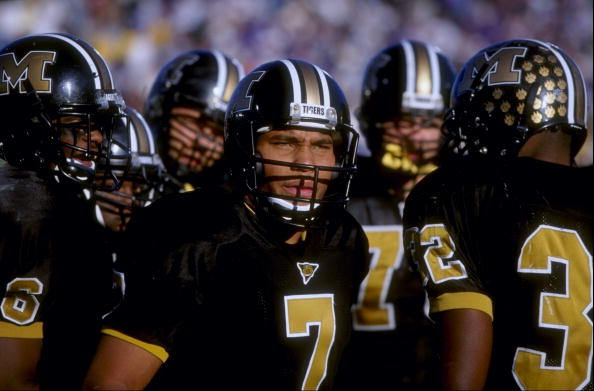 Three Nebraska defenders are closing in on you near the goalline in the second half of the biggest game of your life. What do you do? If you're Corby Jones, you jump, backwards, over the defenders, into the end zone. Corby Jones was not as fast as Brad Smith and didn't have anywhere near the arm of Mizzou's other recent star quarterbacks, but the guy was an incredible leader. A 'lead by example' leader. When he was on the field, you knew you were required to sacrifice your body for team success because he did it first. 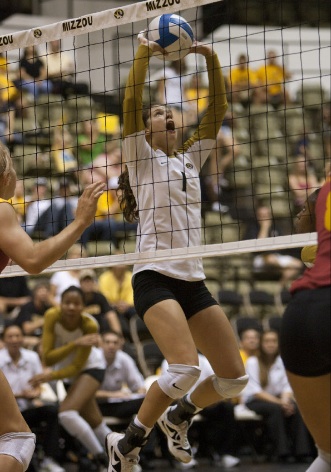 You're an incoming freshman, and expectations for you are already sky high. You play a position that is as (or more) involved in your team's fortunes as a quarterback or a softball ace. For your team to succeed, you have to be at the top of your game from the moment you wear the Mizzou jersey for the first time. And right at the start of your career, you dislocate your right pinkie. Do you slap on a brace and hope to get back on the court as soon as possible? No, you play anyway. Stick some pins in there, serve underhanded if you have to, and get the hell onto the court immediately. We knew Molly Kreklow was bold even before we knew she was good. Turns out, she's good too. 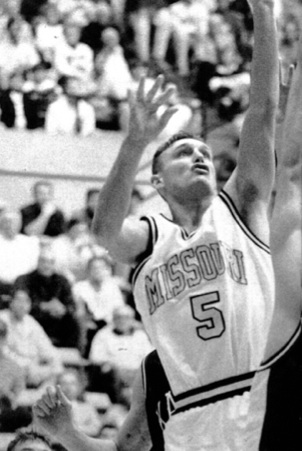 Well, of course Jason Sutherland was going to make this list. There has never been a Mizzou player, in any sport, more willing to mix it up than Sutherland. We would have absolutely despised him had he worn any other jersey. 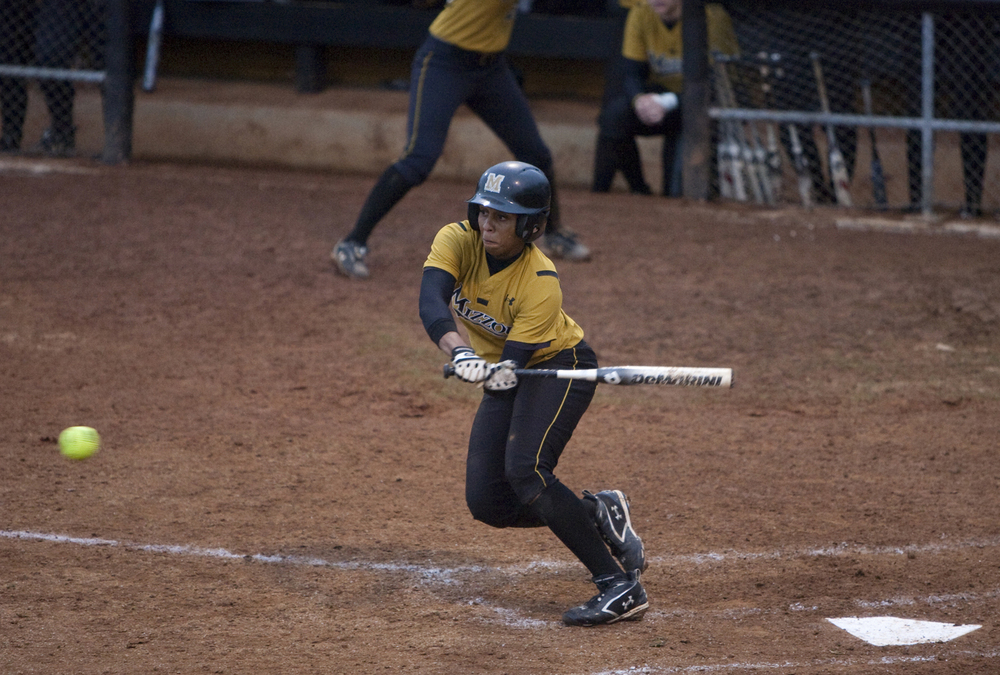 There is perhaps no bolder act than theft in broad daylight. That Rhea Taylor stole more bases, distracted more pitchers, disheveled more catchers, and scored more runs than anybody in Mizzou history, automatically gives her a place on this list. But perhaps the biggest run she ever scored didn't come through theft.

Mizzou lost their mojo in the second game of the 2011 NCAA Regionals. They lost focus, made killer mistakes, and lost to DePaul, 2-1, in 11 innings. With what was supposed to be a third straight World Series on the brink, and Mizzou leading just 1-0 in the rematch, Taylor decided she had had enough. With Abby Vock on first and Brianna Corwin on third, Taylor hit a bomb, a mammoth, cathartic, three-run homer that put Mizzou up, 4-0. They went on to beat DePaul twice that day (by a combined 15-3), swept Washington the next weekend, and advanced to the WCWS just as planned. But it might have gone awry had Taylor not decided to eschew the slap-hits-and-stolen-bases routine and go for the bomb instead.

I mean ... was that not the meanest run you've ever seen? If your nickname includes the word "Train" and you pull off runs like that, you make this list, no questions asked.