Continuing yesterday's look at the receivers... 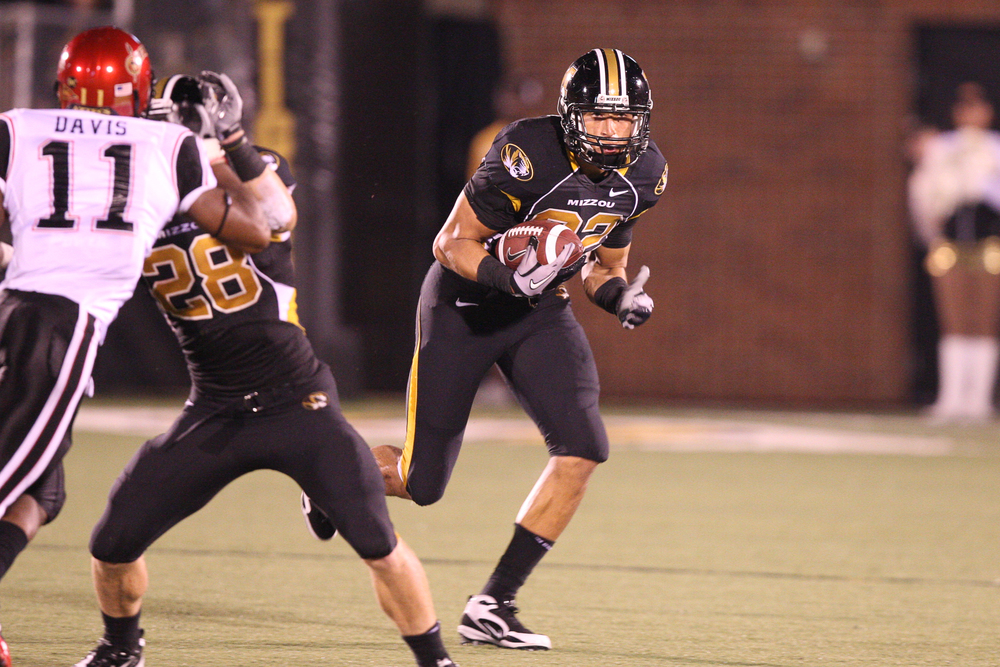 Michael Egnew is not quite as strong as Martin Rucker, and his hands are not quite as good as Chase Coffman’s.  But he and T.J. Moe made for the best zone-killing tandem in college football in 2010.  Despite two seasons in which he was the subjects of raving practice reports skepticism about his role in 2010 was somewhat warranted. But Egnew found the top of the depth chart and thrived, catching a ridiculous number of passes (40-50 more than just about any other tight end in the country) en route to All-American honors.

The main question for Egnew is simple: can he develop the same pass-and-catch rapport with 2011’s starting quarterback?  Every quarterback needs a zone buster, a guy camps out in a hole in the zone seven yards upfield, and Egnew fits that role exquisitely. Mizzou reliably gained six yards every time Gabbert looked Egnew’s way, and that is a tremendous asset for a new quarterback. If Missouri can’t find a reliable deep threat, it’ll once against have to beat defenses with efficiency, and Egnew (and Moe) represent hope for that objective.

Sometimes it’s hard to accurately gauge the progress of early enrollees, simply because the media coverage is disproportionate because of the lack of other freshman to divide the spotlight. But with Waters, the positive reports and the playing time in his freshman year seem largely justified. From a macro viewpoint, Waters’ quick ascension seems almost even more impossible by the fact that he spent much of his youth focusing on basketball rather than football. Yet, the coaches felt comfortable that the learning curve wasn’t so steep as to warrant a redshirt. Whether that is a testament to his physical game or his mental game remains unclear, but either way, it’s reason for excitement, as is the fact that he’ll have three years to grow with a new quarterback.

In 2008, Andrew Jones career development was right on track. With Chase Coffman battling injury, he became a semi-reliable target for Chase Daniel late in his true freshman season. But somewhere in the middle of his sophomore year, Blaine Gabbert simply stopped looking his way, be it because of merit, reliability, or a simple tendency toward favoring other receivers. Despite spending most of 2009 atop the depth chart, Jones was targeted maybe once a game and caught a subpar 58.3% of those passes. Jones didn’t receive many opportunities to prove his worth in 2009 or 2010, and he did little with the opportunities he received.

With a new quarterback comes a new (and final) opportunity for Mr. Jones to make good on his four-star rating from Rivals. And no matter how he produces on the field, history will show that he was one of Mizzou’s best recruiters as the vaunted class of 2008 was taking shape. But if he can’t command playing time in 2011, that may be the entirety of his legacy.

Brinkley walked on to Missouri’s roster and, at the behest of high school friend Tommy Saunders, expanded his role to include tight end reps in addition to his long snapping duties. In some small way, he’s managed to follow Saunders’ "walk-on becomes quietly invaluable to the operation" storyline. Brinkley was limited to special teams for most of 2010 by a left shoulder sprain that required surgery in the off-season. Though he continues to be listed as a tight end and has proven his worth in practice (as evidenced by the fact that he was the No. 1 tight end on the depth chart for one week in 2009), there’s little doubt his value is in his long snapping, which Saunders once described as NFL-level. Brinkley’s ability as tight end is a nice luxury for Mizzou’s depth, but his long snapping is a necessity. And with backup snapper Brad Madison taking an increased role with the defense in 2011, Pinkel and Co. will likely do everything they can to protect Brinkley’s ability to serve in that capacity.

Just as is the case with the running back corps, this group of receivers and tight ends could not possibly be more favorable for a new quarterback. Barring injury, at the very least, he’ll have a group at least as good as the one Blaine Gabbert had in 2010. He’s guaranteed seven-yard option in Egnew, and he could have anywhere between one and three more as well.

These units are notable mostly for what happens below first string on the depth chart. At tight end, Andrew Jones will be attempting to fend off two youngsters and salvage his senior season on the squad, while Eric Waters will likely continue his grooming as New Egnew in 2012. The same is true at receiver. T.J. Moe will continue to be T.J. Moe, and Jerrell Jackson and Wes Kemp should continue to be Jackson and Kemp.  But what is bubbling under the surface has to be considered the most intriguing and exciting part of the Missouri offense. If anyone -- Marcus Lucas, Jimmie Hunt, Bud Sasser, Rolandis Woodland, L'Damian Washington, et al. -- can emerge from the crowded group of names, Missouri’s offense slides one step away from "good" and one step closer to "great."