Written by The Tailgate Princess. (Foreward by The Beef)

As this piece already dangles ever so closely to the same "cheesy retrospective" I offered this very same magazine last year, I am still struck as to how much has changed since last I found myself putting fingers to keys.  Never mind all the world and national events which took place in 2010, whether they were sports-related or not, my year was turned completely upside-down in the mid-afternoon of Sunday, July 25th, when my wife and I welcomed Rebecca Grace Rosner.  Like clockwork, and as appears to be the rite of early passage, as soon as she joined us, so too did the ridiculous amount of clothing which appears to accompany little girls into the world.  Of course, our best friends and family made sure she would have plenty of Mizzou apparel to wear in support of the alma mater of both her parents.

But as the calendar turned from July to August to the first days of September, many people (both casual and close to us) noted the upcoming season and started to ask some questions they perceived as both fearful and tough.

"What about football season?"
"What if she doesn’t want to go to Mizzou when she gets older?"

Though the two questions are somewhat separate, we took them both on with the same stance.  That stance was not in failing to recognize the questions themselves, but in not acknowledging anything but one answer.  While the answers to each question are worded differently from one another, at their heart, they are the same.

"What about football season?" might have been my response to a co-worker, as if to blow it off.  The fact was, at Rebecca’s infantile age, as long as the weather was OK, it was just going to be easier to bring her along than to arrange for other care options.

"She won’t want to go anywhere else," might have been shot back in response to the second question.  As her parents have already attended close to 250 Mizzou football games combined, Rebecca will be exposed to all things Mizzou early and often.  While she may not yet have formed memories, I’d like to believe there was at least some take-away for her from this past season, where she attended her first seven football games of her young life.  This piece represents those potential memories in between naps, feedings and pictures.

Are we risking over-exposure to Mizzou at some point and how it might turn her off to the place which her mother and I love so much?  Will she roll her eyes every time we pass the Reynolds Alumni Center and talk about how we got married there?  Without being overly obtuse, I suppose it is possible.  But in the end, she’ll learn to love Mizzou just as her mother and I did. 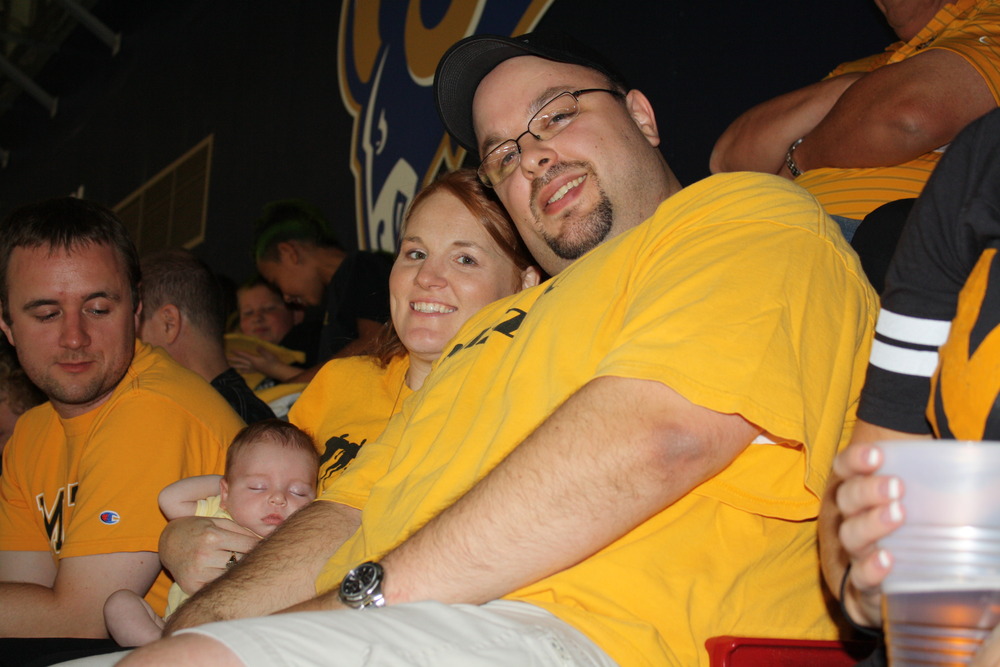 6:00 a.m. – The nice thing about being just barely 6 weeks old is that I get to keep weird hours and see all hours of the day, just to get used to them.  But I am not really even awake when Dad goes flying out the door.  He seems really excited about picking up something called "Dunkin Donuts" for something else called a "tailgate".  Pretty sure Mom just rolled her eyes at him without actually opening them.  My Mom, she’s so talented.

7:30 a.m. – Mom and Dad have loaded me into the car wearing what I really think amounts to nothing more than a sack with sleeves with a Mizzou logo on it, but that Mom thinks is cute, so I humor her and don’t soil it.  Dad was so busy getting other things loaded into the car, he took another shower.  It seems nice outside, and I am looking forward to some fresh air.

8:15 a.m. – We appear to arrive at our destination, and I have to say I kind of like it.  The sun is out, and even though Mom and Dad appear to be keeping me in the car, they at least opened the door to let some fresh air in.  Soon enough I will meet people who also have funny, one-word names like Shep and Pops.  I don’t think Dad is being very nice, as he is not sharing his donuts.

11:00 a.m. – Mom changes me out of my sack with sleeves into my game outfit, which is gold and from the Sun Bowl game long before I was born.  My Mom gets all the cool stuff for free.  This is the most time I have ever spent outside and I really like the sun and the breeze.

11:30 a.m. – Why am I now inside and in the dark?  If not for the noise and the fact I am wearing clothes, it’d almost be like where I came from a few weeks ago.

3:45 p.m. – Dad takes this picture.  Mom does not look too happy about it, but everyone else thought it was funny. 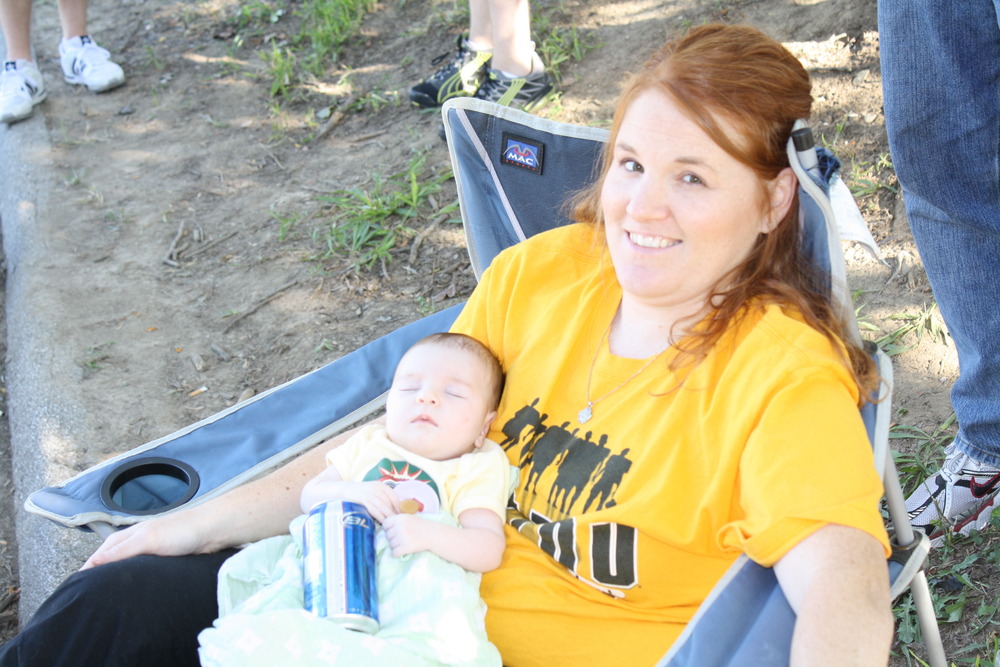 1:00 p.m. – There sure are a lot of people at my first tailgate in Columbia.  All my grandparents are here and lots of other friends named weird things like Boom, Uribe, Swill and Sleepy.  Mom may make some comment about Dad having strange friends.  Speaking of Dad, I don’t see him too much, but a lot of other people get to hold me. 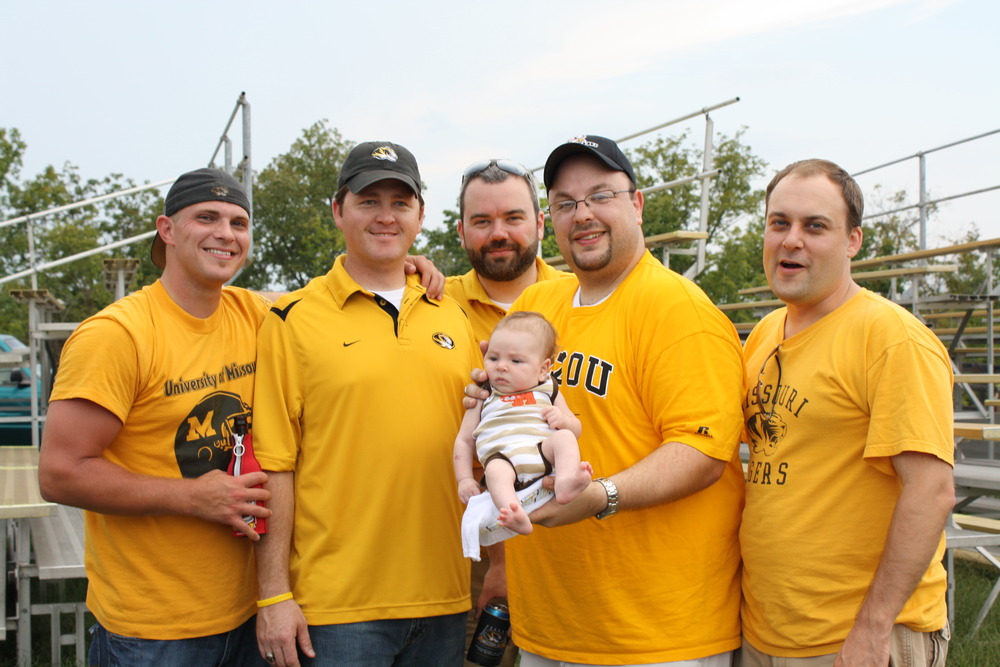 5:30 p.m. – I get into the stadium for the first time.  There is a band that starts playi……sssnnnnnnzzzzzzzz…….zzzzzzz….

6:07 p.m. – 8:51 p.m. – I sleep.  I eat once.  Pretty sure Mom changes me.  Dad will figure out later it was midway through the second quarter until Mizzou is even faced with a third down, and they are leading 30-0 at that point.  Mizzou wins again and I am 2-0, and then I get to spend my first night in Columbia.

10:00 a.m. – No overnight trip this weekend for me in Columbia, and less people are following us on the highway as we head back to our tailgate spot.

3:30 p.m. – I am finding that I either attract people, or really repel them at these tailgates.  There are some who cannot stay away from me, and some who wont come near me.  Dad is cooking.  I think Mom is taking small naps.

6:07 p.m. – I think I am actually awake for the kickoff this time.  Mizzou goes right down the field and scores and Dad seems happy.

7:45 p.m. – It is right before halftime and everyone seems pretty happy.

8:45 p.m. – People are no longer happy, and it begins to rain and look really bad on that enormous TV at the stadium.  Mom saves me from the rain and takes me out to the car.

6:30 a.m. – I still may not be sleeping through the night, but I will never understand why Mom and Dad keep waking me up on the weekends when I am asleep.  This will certainly haunt them down the road when they want to sleep in and I want to go to another football game.

2:45 p.m. – Dad screams as the kicker misses an extra point, which snaps some sort of streak.  I fall back asleep quickly.

6:10 p.m. – 9:12 p.m. – Dad and his friends are dorks.  They just love that Colorado was shut out in Columbia for just under their last ten quarters of football before moving to a new conference.  They also laughed when Mizzou was winning this game 2-0 and 5-0, making baseball jokes.  Mom and Dad have only taken me to one baseball game, so I don’t know why that is funny.  But, I sleep, I eat and mom changes me.  Mizzou is 5-0 and so am I.

Friday, October 22nd, 10:30 a.m. – Mom and Dad both take a day off from work to take me to Columbia early to see all kinds of things.  Does it count if I am sleeping through most of this?

9:00 p.m. – I am on the Upper Deck of The Heidelberg, and no one really seems put off by the fact I am here.  Isn’t it a little strange to have me at a restaurant/bar this late?  What sort of example are my parents setting for me?

9:00 a.m. – My favorite show to watch with my Dad starts.  College GameDay.  As the show starts and we get to see the Quad that I visited yesterday, Dad complains about the hotel room being dusty or something, since he is having a problem with his eyes.

10:59 a.m. – The one old guy on the show throws the Mizzou helmet away and puts the OU mascot head.  Mom and Dad are not impressed, but it is time to head to the tailgate.

1:00 p.m. – Kind of windy this afternoon, and we are in a different spot, which made Mom and Dad mad.  A friend of a friend of Dad’s walks up with eight full slabs of steaming hot ribs. Mom says I am not old enough to eat them.

7:12 p.m. – Everyone has settled in for the start of the game and I am asleep already.  Even when Gahn McGaffie takes the kickoff back for a touchdown, I sleep.  Even when the mass of people all move to celebrate the score and knock Mom backwards on to the bench, I sleep.  Even when everyone says it is the loudest they have ever heard the stadium, I sleep.

10:00 p.m. – We are back in the stadium, since Mom vows she won’t miss another big moment just because of me.  I go back to sleep now that I am back where I should be.

10:40 p.m. – There must be more dust from the hotel room in the stadium, as Dad is having trouble with his eyes again.  So are some of his other friends.  Dads can be strange sometimes I guess.

10:47 p.m. – The game ends and Faurot turns into a dance floor.  Mom and Dad don’t seem in any hurry to leave as lots of my "aunts and uncles" come to visit us.  They even take a picture of me with Mom and Dad that gets used as their holiday card.  But Mizzou has won again, and they are now 7-0 while I am 6-0. 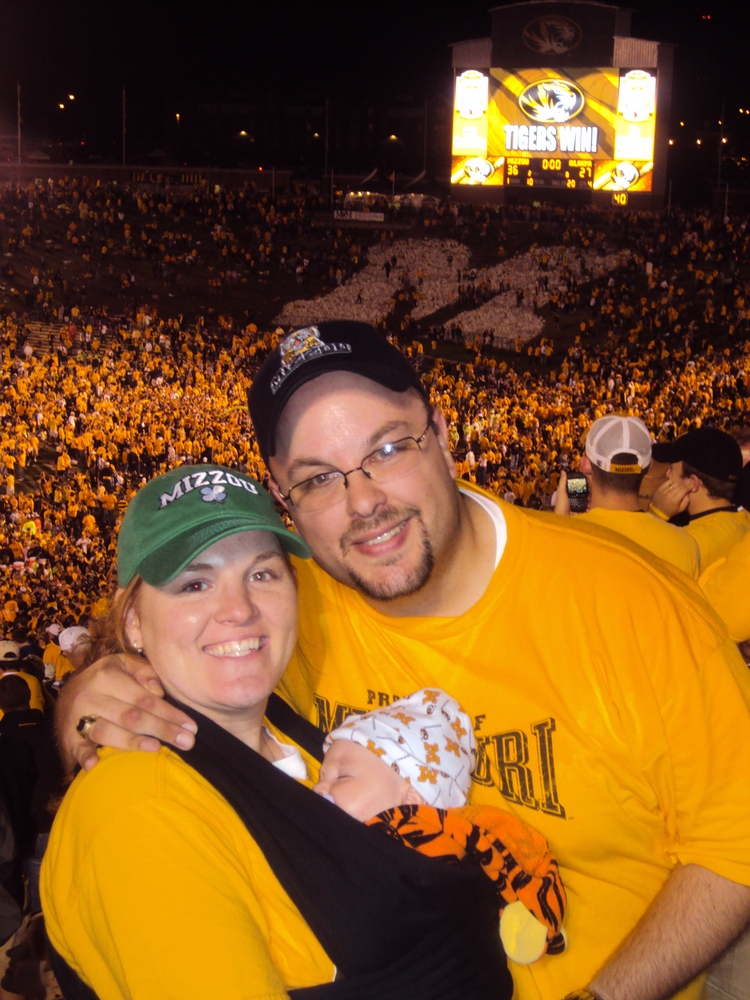 Sunday, October 24th, 11:00 a.m. – Mom and Dad take me to Shakespeare’s to meet up with more friends.  I think there are as many people here as there were at the game the night before.

12:30 p.m. – Mom and Dad take this picture, which sums up my first football season pretty well. 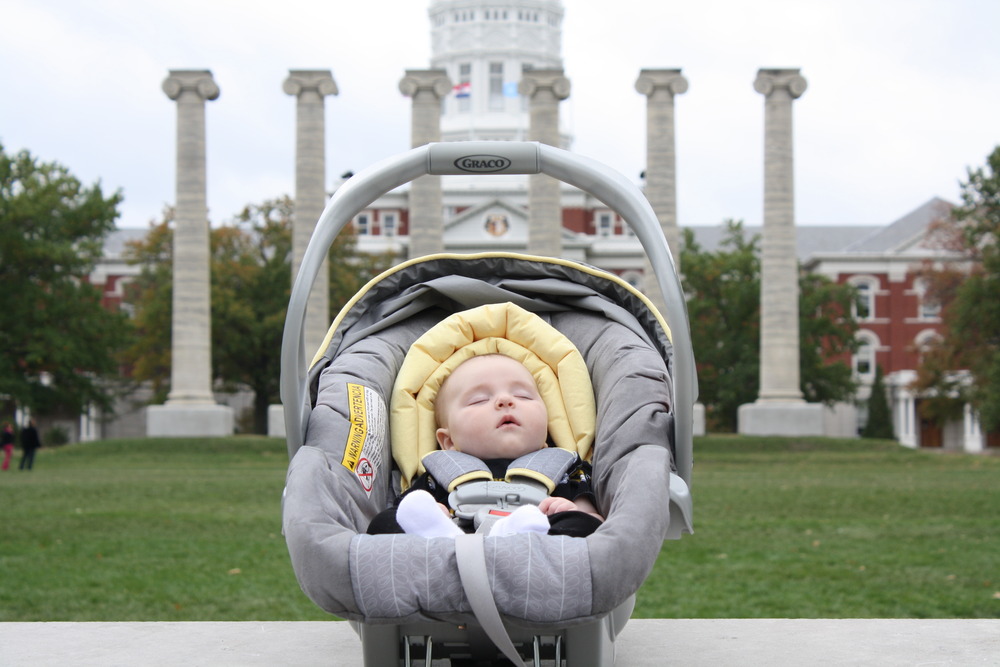 Friday, November 12th, 7:00 p.m. – Mom and Dad take me to Columbia for the night before the game to have dinner with some friends.  Dad makes me mention this here in the hope that the same friends will read this and invite them back for dinner again, and make the same pork loin.  I also get to watch a Mizzou basketball game on TV.

Saturday, November 13th, 7:00 a.m. – Once again, Mom and Dad choose to wake me up. Mom is worried because it is going to be pretty cold.  Dad says I can handle it.

8:00 a.m. – I am wrapped in so many layers that I cannot really move.  Now would be a good time to make Mom change my diaper, come to think of it.

11:00 a.m. – Mom and Dad seem sad the last tailgate is ending, but keep talking about how much they love me because I made them buy a minivan.

11:40 a.m. – 2:56 p.m. – I survive the cold far better than the K-State quarterback survived Aldon Smith.  Mizzou is up real big before eventually winning, making them 9-2, but making me 7-0.  Mom and Dad seem in no rush to leave the stadium at the end of the game.  Sometimes they are weird.

12:05 a.m. – As the game is ending, I can hear Dad tell Mom that they should have taken me to the game and to visit my great aunt and uncle in Scottsdale, as clearly I was the difference maker for the team this year.  I roll over and go back to bed.