The Big 12 and the Big Ten were the conferences of note for Missouri fans during conference realignment, but something new is brewing out West as well. And with the advent of the Pac-12 Conference, Missouri’s trip to Tempe in September will be its first foray into the newly established South Division of the Pac-12.

Just how Arizona State plays into the Pac-12 South equation remains a matter of debate. The Sun Devils finished 2010 with a 6-6 record, though they remained outside the bowl picture by virtue of multiple wins against FCS schools (Portland State and Northern Arizona). The statistics and the win columns were at odds with one another all season long. According to expected point values, Arizona State statistically outscored Wisconsin, Oregon, Stanford and USC in eventual losses. But the Sun Devils finished second-to-last in the conference in turnover margin (-6), and their inability to protect the football and finish games cost them dearly at the margins.

Because of the so-called "character losses," Arizona State enters 2011 as a prime candidate for Pac-12 darkhorse status. And as Missouri proved in the Big 12 North, being in a shaky division can greatly help matters. A number of coaches picked newcomer Utah to win the South, but put Arizona State second, ahead of Southern California and Arizona, both of which are battling their own various demons (including USC’s postseason ban). With Oregon and Stanford likely to decide the North, Arizona State may control its own path to the Pac-12 title game.

Coach Dennis Erickson finds himself with an odd set of circumstances in 2011. He will need to manage the growing expectations created the Sun Devils’ performances against tough opponents last year. Consequently, Arizona State has to find a way to improve upon the variability that defined its 2010 season.

For an offense that lacked some of the national prominence of its West Coast counterparts, the offense was hard to fault for any of Arizona State’s struggles in 2010. Arizona State finished third in the Pac-10 in scoring offense in 2010 (32.3 points per game), trailing only The Chip Kelly Oregon Experience and the Jim Harbaugh/Andrew Luck attack from Stanford. That also meant outscoring the likes of Lane Kiffin’s USC offense, Jeff Tedford’s Cal offense, Steve Sarkisian’s Washington offense, and Arizona’s Air Raid.

Though it avoids the label that follows other teams in the conference, Arizona State relies on a pass-heavy offense in all situations: early downs, late downs, red zone, etc. Quarterback Steven Threet opted to leave the team as a result of multiple concussions suffered throughout his career. Threet, a one-time Michigan transfer, was a game manager during his time in Tempe, completing 62 percent of his passes for more than 2,500 yards, with 18 touchdowns and 16 interceptions. With Threet’s exit, mammoth 6-8 junior Brock Osweiler is the presumptive starter after having gone 62-of-109 with five touchdowns and no interceptions in spot duty in 2010. Osweiler’s style of play is significantly less "high risk, high reward" than Threet’s, which may help minimize the type of turnovers that crippled the Sun Devils last season.

Osweiler inherits an offensive line that returns all five starters from a unit that was perfectly average in 2010. It was a growth year for a line that had struggled in years past, surrendering 31 sacks in 12 games, good for seventh in the Pac-10. Adjusted for Arizona State’s pass-happy tendencies, the Sun Devils sack rate ranked 59th in the country, almost exactly in the center of FBS teams.

The line struggled to open lanes for the running backs, all of whom still managed to perform slightly above expectations all year long. Junior Cameron Marshall and sophomore Deantre Lewis’ statistics seemed straight out of Missouri’s comfort zone. Both averaged more than five yards a carry, with Marshall receiving 12.5 carries per game and Lewis taking 8.4 per game. Lewis spent the offseason recovering from a shooting that hospitalized him for four days, btu Marshall and Lewis represent legitimate threats to Missouri not only on the ground, but through the air as well, where they greatly assisted in the offense’s efficiency a year ago.

Receiver T.J. Simpson will miss the Missouri game if not the entire season after an offseason knee injury. Top target Kerry Taylor has since graduated, and Arizona State lacked a true No. 2 threat a year ago. Mike Willie may now be the No. 1 guy, a tall task for someone whose 2010 production was on par with that of Missouri’s Wes Kemp.

In the same vein of some of Missouri’s defenses of the last decade, Arizona State under defensive coordinator Craig Bray has been strong from down-to-down but prone to the occasional mishap through the air. Arizona State had a Top 20 rushing defense a year ago (Top 10 according to efficiency measures), and when the Sun Devils were able to force third down, possessions were all but assured to come to an end. Arizona State was 10th in the country in third down defense, allowing opponents to convert only 33.5 percent of third down opportunities.

Bray managed this success a year ago despite only four returning starters. In 2011, he’ll have the luxury of eight returning starters (and would have had nine if not for a torn ACL suffered by cornerback Omar Bolden in April). The face, mouth, and soul of the Arizona State defense will continue to be linebacker Vontaze Burfict, the oft-uncontrollable dynamo whose hit power, on a scale of 1 to 10, ranks between an 8.5 and "murder" on most days. Burfict is built in the mold of a Bill Romanowski, an impact player whose aggressiveness creates a certain proneness to the occasional lapse in judgment (and, thus, the occasional personal foul).

Though Arizona State will be breaking in two new starters at defensive tackle, the Sun Devils feature a strong set of defensive ends. Senior defensive end Jamaar Jarrett is long and rangy, with a build similar to that of former Georgia Tech star Derrick Morgan, a 2010 first round pick of the Tennessee Titans. Jarrett started six games in 2010, amassing 40 tackles (10.5 for loss) with 4.5 sacks. Fellow senior James Brooks followed a similar stat line last season, with 25 stops (7.5 for loss) and four sacks. But while the senior consistency of Jarrett and Brooks may be appealing to Bray, the highest upside may belong to sophomore end/linebacker hybrid Junior Onyeali. The combination of Onyeali’s edge speed and ability to overpower blockers presents a distinct challenge for Missouri in pass protection. Onyeali had 6.5 sacks in five starts, including two in a Duel in the Desert win against Arizona, en route to being named the Pac-10 Defensive Freshman of the Year in 2010.

But if the pass rush isn’t as stout as expected, Arizona State’s deficiencies in the defensive backfield may once again be exposed. Arizona State held opposing quarterbacks to an efficiency rating of 112.9 in wins but surrendered a 147.9 rating in losses. The aforementioned injury to Omar Bolden – a unanimous First Team All Pac-10 performer – puts pressure on either sophomore Osahon Irabor or freshman Devan Spann to step up against No. 1 receivers. 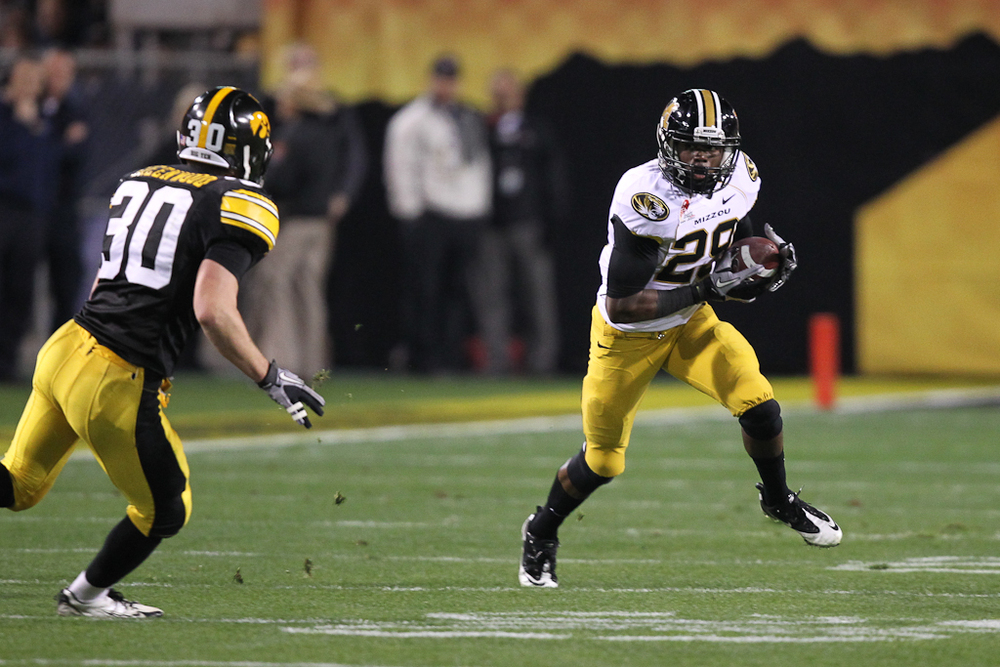 If Arizona State's pass rush cannot get to James Franklin, Jerrell Jackson could have as big a game as the last one he had in Arizona.

Just 12 months removed from a disastrous 1-10 campaign in Al Onofrio’s first season, Missouri rebounded to go 6-5 in 1972, going 5-1 in games decided by one possession and rebounding quickly after blowout losses to Baylor and Nebraska. They head to Arizona to play in the second annual Fiesta Bowl. Unfortunately, a shaky Tiger defense is assaulted by quarterback Danny White and the Sun Devil offense. ASU gains almost 700 yards, and despite an inspired performance from Tommy Reamon (155 rushing yards), Chuck Link (80 receiving yards) and Mike Fink (100-yard kickoff return), Mizzou cannot prevent the 15th-ranked Sun Devils from pulling away in the fourth quarter.

It's been an up-and-down few years for Dennis Erickson since he left the wonders of the Kibbie Dome for one of the 20 most desirable jobs in the country four seasons ago. Throughout his career, which has now spanned 18 seasons (and six schools) at the FBS level, Erickson has been a fast starter. He moved Washington State from 3-9 to 9-3 in his second year there, he went 44-4 in his first four years at Miami (then again, I could have probably gone about 40-8 with that talent, and I was 11 at the time), he boosted Oregon State to an unheard-of 11-1 in his second year, and he even made Idaho a respectable 4-8 in his lone season in Moscow; it was the Vandals' highest win total in six years.

At Arizona State, it was no different. In his first season in Tempe, Arizona State won double-digit games for the first time since their charmed 1996 season. Of course, it was a bit of a mirage. They went 3-0 in one-possession games and ranked 25th in our F/+ rankings; they were good, but they weren't "ten wins" good, and in the three years that have followed, their average F/+ ranking has been 57th, they've gone just 11-21 versus FBS opponents, and they've gone 2-10 in one-possession games. They were just good enough to be disappointing in 2010, with a few blowout wins over bad teams (Portland State, Northern Arizona, Washington State, UCLA) and the aforementioned competitive losses. Their Adj. Record suggests they indeed played better than their 6-6 record, which is a positive sign for 2011, but the trend is alarming.

Arizona State might have one of the best homefield advantages in college football.