Tonight, I'll stay up until 2 a.m. Maybe later. Sleep, if you think about it, is one of the few things in life in which the starting time is listed as "TBD," but the the end time is clearly defined.

Tomorrow morning, though, both of my alarms, simultaneously, and I'll wake up at 8 a.m. on a Saturday, which sounds insane. I'll do it because Missouri has a football game. It will be about the 100th Missouri game I've watched.

Tomorrow morning, in some place just outside Nowheres-ville, Missouri, an old man will roll out of bed at 8 a.m. on a Saturday, which doesn't sound insane to him, and strap on his old snap-back Missouri cap, the one that was cool, then not cool, then suddenly cool again. He'll do it because Missouri has a football game. It will be about the 500th Missouri game he's watched.

Tomorrow morning, Erin Connelly will wake up way earlier than her parents want her to. Her parents will argue over whose turn it is to tend to her, and unbeknownst to her, she'll join the ritual. She'll sit in spot specially designated by her parents. She'll do it because Missouri has a football game. It will be the 1st Missouri game she's watched.

Tomorrow morning, whether we realize it or not, we're all on the same clock. We're going to rise as one, because Missouri has a football game. It might be the 2nd or 50th or 10,000th Missouri game we've watched; it doesn't matter. What matters is that we're here. We've survived just enough nights to make it here.

We'll be awake. Awake enough, once again, to watch college kids in silly uniforms run around and play a game. And we'll feel connected to them, and to each other, one more time. We'll be awake, and I'll be if it won't be the best kind of awake. 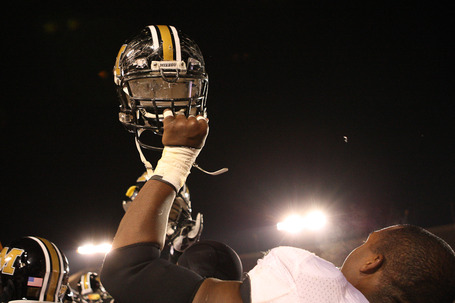 Your soundtrack for the best day of the year.