2 - With Mizzou on a bye week, what errands will you attempt to finish that you have completely ignored over the last four weeks?

3 - So it appears the Missouri Curators might be meeting next Tuesday, and everybody's assuming the topic is in regard to Missouri's conference affiliation. What decision do you expect to come from the apparent "SEC or Big 12" debate?

4 - The wife and I are disturbingly excited about the new season of The Next Iron Chef. (Just look at the candidates!) Answer one of three questions: a) YOU ARE JUST AS EXCITED, RIGHT??? b) Who's going to win? c) Is it bad that I've spent more time thinking about this show than the MLB playoffs?

The Beef: 1 - My biggest reason for optimism has been the road performance of James Franklin.  If you are doing what he has done in those two games (what…just about 800 total yards of offense) in that sort of environment, you can lead my team any day.  I have pessimism about additional weapons on offense for the offense and the defense in general.  The line is not generating the push we thought/hoped and the secondary does not seem to consistently be on the same page with reads and covers.

2 - I wont have the chance to do much of what I wanted to do on a free weekend as the Tailgate Queen will be headed to Como to judge the state Cheerleading competition, leaving my daughter and I alone for a weekend together.  She only takes so many naps….

3 - The discussion about the back of Jon Gilmer’s napkin is VERY intriguing, and I was also surprised to hear the SEC might be able to rework their Tier I deal even though the ink was barely dry on it.  That would potentially make a move to the SEC all the smarter from a revenue standpoint, almost to where it might quickly make up whatever sort of penalty we might be on the hook for (assuming it is not yet the 6-year TV surrender plan which I was thinking was not yet in ink).

4 - I am excited to see that a Spike Mendelsohn exists…that name makes me laugh.

And speaking of the Tailgate Queen…we should wish her a happy birthday.  So do it…WISH MY WIFE A HAPPY BIRTHDAY DAMMIT!!

Pessimism: You may have noticed that the two quality QBs they’ve faced have thrown for a million yards. There are a couple of guys left on the schedule who can sling it.

2. Honestly, I haven’t ignored anything. Games are on in the background. Get ready for it, whippersnappers. One day the world won’t stop on Saturdays. That said, I’ll get in a little extra piano practice. I’m adding bass A to the toolbox this week.

3. Really, no clue, and I’ve grown pretty ambivalent about it. I’ve been turning this stuff over in my head a lot lately, and I’m coming down on Taylor Branch’s side of the argument. The only thing that seems to matter much here is money. I don’t see a value being placed on anything else – what’s good for the university overall, what’s good for student-athletes, etc. This is all about professional football, but we’re not allowed to call it that. Whole thing is strange.

4. a) Even though I didn’t previously know this was happening, yes I’m just as excited; b) anyone but Michael Chiarello, please; that guy makes my teeth hurt. Robert Irvine seems made for the show, and while I’ve never actually eaten anything prepared by any of them, I suspect that Alex Guarnaschelli is a level above most; c) I’ve spent more time thinking about 1,000 things than the MLB playoffs. It wasn’t until Arizona clinched their division that I realized they were in contention. I did attend three MLB games this year in two ballparks, though, so I guess I am pretty much the king of baseball fans.

Doug: 1 - Best reason for optimism, KU's offense has shown to be vastly improved from last season. They got a great stable of running backs and a quarterback that can throw it down field. The big reason to be pessimistic is the complete lack of a defense after about the first quarter.

2 - You guys could come down to Albuquerque for the first weekend of the International Balloon Fiesta. It's the 40th anniversary! I won't be here, but you are guys are more than welcome.

3 - Oh good Lord. Seriously, how does Brady Deaton go from spear-heading the effort to "save" the Big 12 to throwing gasoline on the fire in about a week and a half? I'd give about 60-40 right now that Missouri will turn down the SEC, simply because there is a very large paycheck coming the Big 12's way next season. Plus, if Missouri does join the SEC, it does completely rule out any opportunity to join the Big 10, when it starts looking at the possibility of expansion in another 4 to 5 years.

4 - I'll give best odds to Michael Chiarello and Spike Mendelsohn. Both have the Top Chef experience, working under the gun under bright TV lights, and Mendelsohn has Kitchen Stadium experience from doing an Iron Chef episode, I believe, last season. I'll really be looking forward to Geoffrey Zakarian getting ripped to shreds for once. That guy always irritates me on Chopped. (Oh, there isn't enough texture for you on the plate? Well, next time, don't put mallow, Cool Whip and smooth peanut butter in the basket!)

Also, the last "Next Iron Chef" I really watched was the one where Garces won. Is it just me, or do they rely WAY too much on Asian food and techniques at times? I know those techniques are fast, but honestly, could we up the challenge at little bit more? I don't need to see them make a bento box every episode.

Michael Atchison: I’m guessing this is the only bento box reference that you’ll see made on a sports website today. Point to Rock M Nation.

1 - Optimism - Offense has performed ahead of expectations, and we haven't seen this defense play their best ball yet. The pieces are there, and my expectation is that Stek will put those pieces together.

Pessimism - ...unless, of course, our expectations for the defense will never be realized and we still have to face OSU, Baylor, A&M, Tech and Texas.

2 - I think after the kid's soccer game on Saturday, we're going fishing.

3 - I think Mizzou is gone (probably to the SEC). But I will change my mind 3 more times before this gets posted this afternoon.

4 - There is no "Next Iron Chef" - there is ONLY Iron Chef Chen Kenichi. 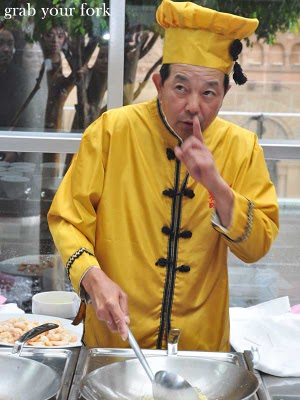 Doug: Speaking of the SEC; I realize the Pitch isn't where we all go for news normally, but given the insanity of this whole thing, it seems as legitimate an outlet as anywhere else.

The Beef: The sentiment of the people really wanting/hoping/wishing for the MU to SEC move to happen is that the SEC commish comments is really something of semantics.  They are not considering anyone because no one else has currently applied.

The Beef: And clearly ZouDave must be in the office, because his out of office has changed since this morning.

I am not currently planning on eating an Shake Shack burger. But if there were to open a franchise location next door to the radio station.............

ZouDave: I am sitting in my office dying of the plague.  I’d email more, but I’m afraid I could infect you even over email.

I’m trying to get out of here so I can go home and sleep another 18 hours like I did yesterday.  If I die, someone promise to feed my dog.

The Beef: As an IT guy, don’t you have a remedy for that sort of virus?

D-Sing: 1. Reason to be optimistic: James Franklin and Henry Josey. We have a pretty solid backfield right now.

Reson(s) to be pessimistic: Michael Egnew? Paging Michael Egnew? Where have you gone to? Also, getting torched by Jones/Oseweiler has me concerned for facing Weeden/RG3. Pressure on the qb is critical to our defensive success, and I don't feel like the pressure is there.

2. Halloween costume shopping for the kid. The goal: a Darth Vader costume. Although to be honest, we usually do erranding on Sundays anyway, but this week we have to on Saturday because we're going to the Phineas and Ferb stage show on Sunday. So I guess it is perfect timing.

3. For now, with no offer officially on the table, and the SEC saying all the right things, I think we remain in the Big 12. I understand from some areas the desire to be in the Big Ten...but...from the time the Western Conference (Big Ten) formed in 1896, the league has "expanded" six times. At some point, you have to move on from the Big Ten dream and explore other options or stand pat. For now, I think we stand pat. But honestly, who the hell knows?

4. I've only dropped in on TNIC for an episode or two here or there, but given the depth of this roster, I think we'll watch the whole thing. If it were based on hours logged in Kitchen Stadium, it would be Anne Burrell, but I'll put my money on Marcus Samuelsson or Chuck Hughes, with being able to accept any of them except Elizabeth Faulkner. I abhor her.

Michael Atchison: Don’t tell me that. I’m starting to feel under the weather, too, and I’m trying to convince myself that it’s allergies, not a plague going around metropolitan Parkville. I’m planning to run a half-marathon in two weeks. If I get sick between now and then and 250+ miles of training go down the drain, I am likely to be unhappy.

ZouDave: My quick answers before I hibernate:

1 – Optimism:  we’ve played 2 of the 4 toughest games we’ll play all year already.  Sure, we lost them both, but we played well in both.  We’ll get better, our opponents get easier (overall).

Pessimism:  For the love of God, can someone please get an opposing QB’s jersey dirty?

SleepyFloyd7: A funny aside - I have been invited to go read to some kids over at Columbia Public Library on Tuesday (same day as reported BOC meeting). Who else is reading at this event? A couple of notable Mizzou athletes and Director of Athletics Mike Alden.

I am picturing Mike D or Vahe dressing up as a 4 year old and trying to sneak in.