I try to not be hyperbolic, but with the news that Texas A&M has been invited to be the 13th member of the SEC, and that the SEC presidents have apparently given SEC Commissioner Mike Slive permission to talk with West Virginia or Mizzou to be the 14th member.

What does this mean? It means that Dan Beebe is quickly running out of coffee:

Look, the conference is rapidly approaching DEFCON 1. The end is coming nigh, and it appears to be coming much quicker than anyone might have anticipated. I know I said last summer that the conference was going to be kaput within a few years, but I didn't think it was going to be, well, less than one year.

Look, the fundamental issue of imbalance was never addressed. Contrary to the opinion of some that Texas should not be blamed for the dissolution of the conference, obviously there was a tremendous amount of butthurt that has taken place because of the Longhorn Network.

The stay together for the kids approach didn't even make it one year. The new Big 12 officially took off on July 1. 65 days later, it appears to be in its death throes. Again.

Part of what I fear, though, is the Pandora's box that the leak of us versus West Virginia will open. Our name is now out there as one of the two "finalists" for that 14th spot.

What is going to happen to the RAWR!!1!!! FULLBACK! FIRE ALDEN!!!!!111!!!! portion of the fanbase if it turns out that West Virginia is the one selected for inclusion to the SEC? Talk about a potential internet meltdown; I do think that Tigerboard would crash.

Yes, yes; adult, big boy decisions don't involve looking at the internet message board chatter and complaints. And it will be intolerable dealing with the media on some level who had no problem painting us a harlot, a tart, as a waitress with her blouse open wide (and assorted other misogynist rants) the last time our names were tied to a conference looking for new members.

I would put us at DEFCON 1.75 right now, rapidly approaching DEFCON 1. The next move will belong to the Pac-12 I guess.

Although if we do wind up in the SEC, we could beat this guy twice a year: 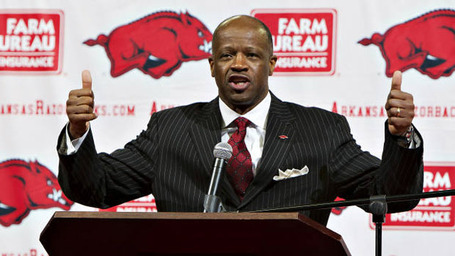 So we'd have that going for us. Which is nice.