Vanderbilt at Mizzou: Beyond the box score preview

Mizzou should expect to beat Vanderbilt at home, but if the Tigers fall into too many passing downs and allow a big play or two, things could get incredibly dicey.

Share All sharing options for: Vanderbilt at Mizzou: Beyond the box score preview

When Vanderbilt is involved, the team that better stays out of passing downs typically wins. You could say this about most teams, I assume, but it is doubly important against a Vandy team that a) stinks on passing downs and b) makes sure opponents also stink on passing downs. It's not as if Mizzou's offense needs any help performing poorly on such downs, of course.

There's a difference, of course. A team that faces mostly third-and-1's or third-and-2's will almost certainly have a better third down conversion rate than those facing third-and-7's or third-and-8's. (The team facing mostly third-and-1's and 2's also probably has a better offense, but I digress.) But in one of my favorite Varsity Numbers columns a couple of years ago, I listed as one of the "truths" of college football data that Leverage Rate -- your ability to stay in standard downs and avoid passing downs -- gives us what we think we get from third-down conversion rate.

This is probably a less obvious truth. Announcers and coaches talk endlessly about how games are won and lost on third downs, and it is absolutely true. But it is also without context. Some defenses, particularly young ones, give up far too many demoralizing third-and-8 conversions. But most of the time, a team that allows a high third-down conversion rate is doing so because they're giving up too many yards on first and second down, and their opponent is converting third-and-3 instead of third-and-8.

The difference in the level of success on standard downs and passing downs is staggering. If you have a significant talent advantage -- always possible in college football -- you might be able to get away with falling into passing downs. But the team that wins is the team that better avoids passing downs. That is why Leverage Rate is included atop the Varsity Numbers box scores I analyze (now on Tuesdays). If your Leverage Rate is too far below the national average of 68 percent, then your quarterback better be Colt McCoy (who was truly a magician at converting third-and-7 and, it appears, masked some serious, developing deficiencies for Texas on the offensive side of the ball) or you are probably going to struggle to win.

Mizzou's full-season leverage rate (68 percent) is right around the national average, which suggests that the Tigers' third-down conversion rate shouldn't be as bad as it actually is. And looking at the conversion rate according to yards-to-go, however, shows us that Mizzou's third down problem indeed goes beyond simply falling into too many third-and-longs. 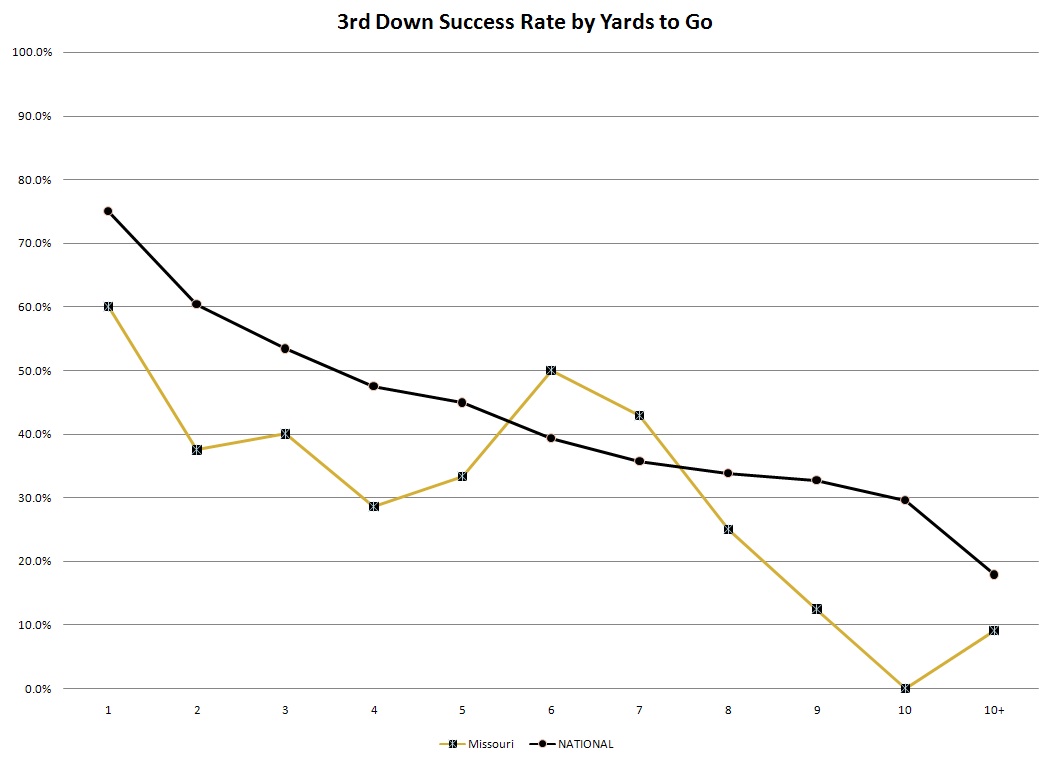 On third-and-short (two or fewer yards), you are supposed to convert about two-thirds of the time. This season, Mizzou is converting about half the time. On third and nine or more, you are supposed to still have a 25-30 percent chance of converting. Mizzou almost never converts. Whatever you feel like blaming, you are probably at least partially correct. Offensive coordinator David Yost almost never makes the right play-call in third-and-long situations, but that's probably because there is no correct play to call when your line cannot even pretend to hold off speed rushers and your starting quarterback is dealing with some shoulder issues. Meanwhile, on third-and-short, the play-calling for every team in the country is going to be rather bare-bones, and Mizzou's struggles in this regard have to be at least partially attributed to an iffy offensive line facing defensive lines like Georgia's (who stopped Mizzou on a late fourth-and-short) and South Carolina's (ditto). UCF also had some success in stopping Mizzou on third-and-short. It would be easy to attribute this to "toughness" or "the spread stinks in short-yardage," but the simple fact is that short yardage really hasn't been a problem for Mizzou in recent years. It is this year.

But hey, Mizzou's pretty awesome on third-and-6 and third-and-7. So there's that.

This is going to be an ongoing problem, of course. While we should expect improvement from the line (and from James Franklin), you don't suddenly go from poor to good. And against Vanderbilt, expect the third-and-long issues to continue. But it isn't too much to ask for Mizzou's line to get at least a bit of a push against an active-but-pushable Vandy defensive line on third-and-short.

It really is going to be vital that Mizzou keep things in second- and third-and-manageable, both because of Mizzou's passing downs issues and Vandy's own defensive strengths. You can run the ball on the Commodores, and hopefully Mizzou will do just that. Because when you have to pass, Vandy shuts you down.

...Vandy also cannot convert passing downs either. The Commodores basically have two receivers and a quarterback who gets sacked quite a bit. Mizzou absolutely, positively cannot let Vandy off the hook on passing downs. Shut drives down when you get the chance, and it is hard to see Vandy scoring enough to win this game, even if (when) the Mizzou offense shows some inconsistency.

My favorite quote from yesterdays' DGB arrest reaction is also a bit of a call to arms to the second string of Missouri's receiving corps. Dorial Green-Beckham's suspension hurts Mizzou's overall ceiling, but it obviously doesn't do much for the Tigers' down-to-down offense. DGB just wasn't getting that many targets yet. But in terms of simple reps, his absence will open the door for players like Bud Sasser and Jimmie Hunt to get a few more reps. Hunt is incredibly dangerous on the rare opportunity that he gets his hands on the ball; if he gets another touch or two in DGB's absence, he might be able to steal some more touches down the line. Regardless, DGB's suspension is also a reminder that Mizzou needs a better game from the receiving corps than it got last Saturday. No drops, please. And if James Franklin wanted to get T.J. Moe and L'Damian Washington a little more involved, I wouldn't complain. I like Marcus Lucas, but I like him more as a No. 2 target or co-No. 1, not as a far-and-away No. 1.

You almost never see a receiving corps in which two players account for over two-thirds of the team's targets. But here we are. Jordan Rodgers (or Austyn Carta-Samuels, if he ends up playing) is going to look to Jordan Matthews first, Chris Boyd second, and a running back third. (Of course, the 'Dores also aren't going to pass very much unless they have to. They will ride running back Zac Stacy as far as he and the line will take them.) Matthews and Boyd are both a bit on the all-or-nothing side, but both are capable of some impressive "all" plays -- Matthews' long reception of the year is 78 yards (against South Carolina), and Boyd's is 60. Mizzou can afford to give up one big play on Saturday, but with more than one, things might get dicey.

Honestly, If Mizzou and Vandy played at Faurot Field 10 times, Mizzou would probably win about seven or eight of them by an average of 10 points or so. And the gut says Mizzou wins by about 14 on Saturday (hey, the gut was right last week, right?). But there really isn't as much margin for error as one would prefer here. If the same offensive mistakes that set Mizzou back last week persist, and the Tigers are facing a lot of second-and-11 or third-and-9 situations, then while it is difficult to see Vandy scoring too many points, it is also difficult to see Mizzou scoring many. This is a game Mizzou fans should expect to win, but the paranoia factor will be off the charts until they do so.