Mizzou takes a trip to The Swamp a year too late.

Share All sharing options for: Missouri at Florida: Exploring the Gators' depth chart

In 2007, Missouri had absolutely perfect timing. The Tigers timed their best team in generations with a Big 12 that saw Nebraska, Texas, Kansas State and Colorado all producing teams much worse than in recent years, and they timed a great run with a national landscape that saw everybody stepping on landmines. In Week 8 of the season, Mizzou found itself ranked 16th in the BCS standings; six weeks later, the Tigers were No. 1. Let's put it this way: In 2012, the No. 16 team after eight weeks was Louisville. Do you see the Cardinals ranking No. 1 in early December? Neither do I.

In 2008, Mizzou returned a majority of its playmakers and produced a team that was roughly comparable to that of 2007. But everybody else in the Big 12 got better -- Oklahoma went from great to tremendous, Texas went from disappointing to title-caliber, and Oklahoma State and Nebraska both went from nothing to something. Looking back, Mizzou's chances at another 12-win (or better) season died the moment those teams improved, even if we didn't know it until the season actually unfolded.

We've seen the same "down, then up" development in the SEC this season. If Mizzou had any good timing left, the Tigers would have ended up in the SEC last year, when a Top 25 Mizzou squad could have faced less-than-intimidating road trips to No. 30 Florida and No. 57 Tennessee in November. This season, the Vols are No. 30 despite the losses, Florida is fourth, and snake-bitten Ol' Mizzou has fallen to 60th.

In all, every opponent in Mizzou's home stretch has improved significantly in 2012 according to F/+ rankings.

This has turned a rough schedule into an absolutely brutal one, and going 2-2 in this stretch (which Mizzou obviously needs to finish bowl eligible) would be rough even if the Tigers were still a Top 25 team this year. They are not.

The most impressive improvement of the four teams probably comes from this Saturday's opponent, Will Muschamp's Florida Gators. Florida was good defensively and directionless offensively last season. This year, the offense is limited but has still improved significantly, and the defense is the second-best in the country behind Alabama. If Mizzou wants to a) dust off its Top 25 form and b) win the turnover battle handily on Saturday, the Tigers could have a chance. But anything less will result in a pretty easy Florida win.

Injuries last year forced both Jeff Driskel and (when Driskel got hurt) Jacoby Brissett into emergency action last year. The youngsters struggled, as youngsters are wont to do, but Driskel has begun to develop nicely this year. He is still limited, and Florida's is still very much a run-heavy offense, even with new offensive coordinator, and former Boise State string-puller, Brent Pease in charge instead of Charlie Weis. But when Driskel had to make plays earlier this year against Tennessee, he did so. Vanderbilt sold out to stop running back Mike Gillislee a couple of weeks ago, and they did, holding him to 67 yards in 17 carries; but Driskel responded by rushing 10 times for 181 yards and three touchdowns. He is an interesting run-pass threat, but Florida is still going to ask him to do as little as possible. If they can get away with winning with defense, special teams and Gillislee, they will.

Mike Gillislee is your prototypical "gets better with time" back. During the first-quarter, feeling-out process, Gillislee is almost completely ineffective. He has carried 37 times in the first quarter and gained 102 yards (2.8 per carry). The rest of the game, however, he averages 5.0 yards per carry. He has 14 carries of more than 10 yards, and 11 of them have come in the second and fourth quarters, as the defense has begun to wear down a bit.

Florida's persistence in the running game means that the first quarter is of grave importance for Mizzou. Two reasons for that:

1. First-quarter success for Gillislee really doesn't portend well for the rest of the game.

2. If Mizzou cannot control the ball at least a little bit early on, and if the defense is on the field too much, then the Florida running game is probably going to click quite well late.

Florida's receiving corps is, on paper, amazing. Andre Debose is a former five-star signee, and Jordan Reed, Frankie Hammond, Jr., Quinton Dunbar, Omarius Hines and the now-injured Solomon Patton were all four-star recruits. But to a certain extent, this unit has struggled a bit for the same reason LSU's has: four-star athletes do not necessarily make for four-star receivers. Debose can officially run one route (the Go) effectively, and Pease doesn't even trust him enough to give him one touch per game. Hammond, meanwhile, is also a bit of an all-or-nothing threat, averaging nearly 17 yards per catch with a sub-50 percent catch rate. Dunbar, Trey Burton and Hines are all decent possession options (Burton and Hines will also see some carries and run-blocking opportunities).

The only true star in this unit, though, is Jordan Reed. The tight end leads the team in targets, catches and yards and has been the target of 29 percent of Florida's passes this year. Let's put it this way: he's seen the same frequency of opportunity as Marcus Lucas has for Mizzou, only his catch rate is 30 points higher (81 percent to 51 percent), and he has gained three more yards (355 to 352) on 28 fewer targets (65 to 37). He's also bigger and a decent blocker. It typically doesn't say much about a unit's explosiveness when a tight end is the No. 1 producer, but in games where Florida doesn't turn the ball over a ridiculous amount (i.e. in games other than last week's Georgia game), it works out pretty well. Big plays become less of a necessity when you have a dominant defense.

Florida's offensive line hasn't survived the year completely unscathed -- tackle Chaz Green missed a couple of games, and James Wilson missed one -- but the unit has remained intact enough to rank sixth currently in Adj. Line Yards. It's not Alabama's line in this regard, but it's close enough. That said ... you can get to Jeff Driskel. Driskel was sacked eight times by Texas A&M and five times by both LSU and Georgia. (Kentucky and South Carolina each got him three times.) Remember: Florida is run-first, run-second. In other words, Driskel gets sacked a lot. Florida ranks 122nd in Adj. Sack Rate. A lot. When the disparity between run blocking and pass protection is that large, I tend to attribute it mostly to the quarterback. Driskel waits far too long to make a play sometimes, and it costs him. If Mizzou is to pull the massive upset here, the Tigers have to take advantage of this and punish Driskel. If you let him find open receivers and move the chains, eventually Gillislee will kill you.

From a recruiting perspective, this line is simply absurd. Sharrif Floyd, Dominique Easley, Omar Hunter, Jonathan Bullard and Donte Fowler, Jr., were all five-star recruits. So was Buck end Ronald Powell, who's out with injury. Not four-star ... five-star. Not even Alabama can match that. With that many blue-chippers, almost no performance would live up to hype, but Florida's line has certainly been a bit disappointing in this regard. Easley missed a couple of games with injury, but still, the Gators rank just 18th in Adj. Line Yards and 63rd in Adj. Sack Rate. Granted, it still probably holds a decent-sized advantage over Mizzou's improving-but-still-limited offensive line. But the real strength of the Gators' defense lies in the back seven.

Some defenses filter the play to the linebackers. Florida's really doesn't. Two of the top three tacklers are safeties (that typically isn't a good thing, but it works for Florida), and of the linebackers, only Jon Bostic is much of a down-to-down play-maker. Jenkins (another former five-star recruit), Kitchens, Ball, etc., are used more for steering plays to certain areas of the field rather than actually making any plays themselves. Still, Bostic is outstanding, and looking at Florida's overall defensive stats -- fourth in Success Rate+, third in PPP+, third against the run, fifth against the pass -- the linebackers clearly do their jobs.

Matt Elam and Josh Evans hit you really, really hard, and this secondary, a liability a year ago (57th in Passing S&P+), has come along nicely as the level of experience has grown. Opponents are only completing 49.6 percent of their passes on Florida, with four touchdowns to 11 interceptions. Watkins and Roberson are as effective as any corner duo in the conference outside of Tuscaloosa, and Elam in particular is devastating and punishing.

Florida is basically this year's LSU, deriving an extreme advantage on special teams. The Gators rank first in Special Teams F/+, and it isn't difficult to see why. Caleb Sturgis has a freaking cannon on kicks, and Kyle Christy is the best punter in the nation this year. The return game is dangerous -- Andre Debose hasn't broken a touchdown yet this year, but he has in the past -- and ... yeah, this is a good unit. You have to hang tight in the field position battle to beat Florida, and the Gators make that almost impossible unless you're forcing a ton of turnovers.

A year ago, you could have almost talked yourself into Mizzou having a chance here. Mizzou's defense wasn't quite as good, but the offense was much better, and Florida was undergoing some serious growing pains in Muschamp's first year.

You can still talk yourself into Mizzou hanging tight if the Tigers can win the turnover battle pretty dramatically, and things stay interesting for a while if Mizzou can win the first quarter, but it's pretty obvious that the odds aren't good. Florida's offense is still rather limited, but the defense punishes you, and the special teams demoralize you. The current spread is Florida -17, and honestly I'd be tempted to bump it a little higher. Mizzou just doesn't have the offense right now to register a threat, even as people start to get healthy again. 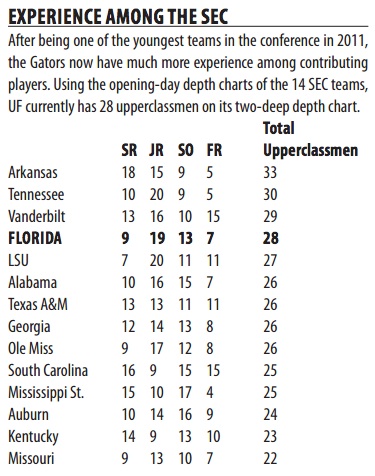 One final note: The table to the right comes from Florida's game notes. I meant to mention it last week when I first saw it but forgot. We talk a lot about injuries and the role they have played in Mizzou's struggles, but we may have been ignoring an enormous red flag from the start of the year: experience. Now, granted, the numbers here are a little funky. Mizzou's four classes there only add up to 39 players, and there are never fewer than 44 on the depth chart, so I'm not sure what the story is. (Vanderbilt, meanwhile, adds up to 54.) But if you take a look at the current Mizzou depth chart (PDF), you see that only 24 of the 44 players on the first and second string are upperclassmen.

(Scary thought: on Florida's most recent two-deep (PDF), there are only 25 upperclassmen.)