Mizzou Moves To The SEC: A short(ish) look at Tennessee

A brief (for Bill C.) look at Tennessee's storied and sporadic football program.

Share All sharing options for: Mizzou Moves To The SEC: A short(ish) look at Tennessee

It hit me this morning, as I began to dive into two different Tennessee previews today (this piece, which was intended to go up yesterday, and the BTBS preview), that I ran out of time to write a Tennessee Football History piece during Tennessee Week this summer and vowed to write one during Game Week. So here is a somewhat abbreviated one. 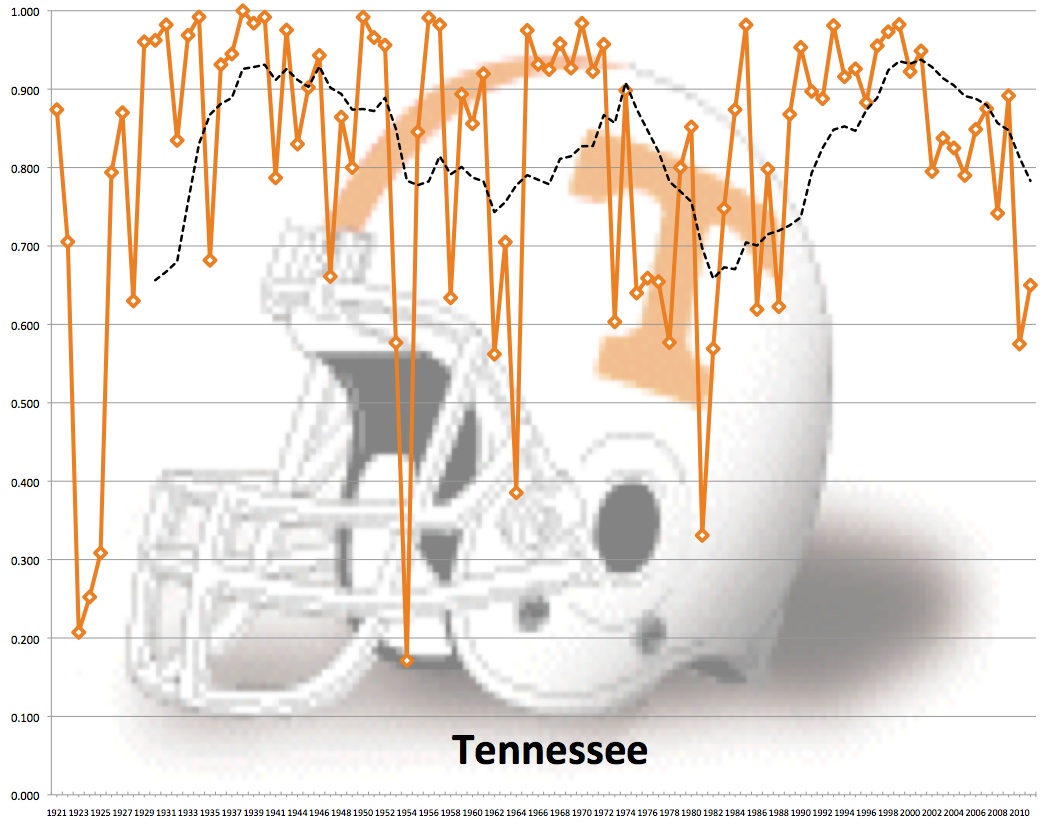 3. Tennessee claims no national titles in that span, which is really almost unbelievable, considering how liberal programs typically are in claiming early titles. But they do still claim four during Neyland's tenure: 1938 (they went 11-0 and allowed all of 16 points), 1940 (10-0 in the regular season, with a Sugar Bowl loss to Boston College), 1950 (11-1) and 1951 (undefeated regular season and a loss to Maryland in the Sugar Bowl).

5. Phil Fulmer helped to push out succeeded Majors in 1992 and led the Vols to perhaps their most sustained level of success since Neyland. Tennessee finished 12th in 1993, then third, ninth and seventh in Peyton Manning's final three seasons in uniform (1995-97). Manning left, and Tennessee won a rather surprising national title in 1998 with Tee Martin behind center. Following the title, a slow downward trend began. Tennessee still finished ninth in 1999 and fourth in 2001, but the Vols reached double-digit wins just four times in Fulmer's last 10 seasons after doing it for four straight from 1995-98. Fulmer was let go after a 5-7 season in 1998.

(You can watch virtually every minute of Tennessee's national title season here.)

7. In Manning's last three years, Tennessee went 0-4 versus Florida and Nebraska and 32-1 versus everybody else. Their lone other loss: 21-17 at Memphis in 1996. Because of course.

9. In 1972, Tennessee expanded Neyland Stadium (known as Shields-Watkins field until Neyland's death in 1962) to hold 70,650, about as many as Mizzou's Memorial Stadium holds now. They have expanded it approximately six times since then. Today's official capacity: 102,455. It held 109,061 for the 2004 game versus Florida. It's not going to hold anywhere near that number on Saturday.

10. Here's what I said about Neyland Stadium in my SEC Crash Course in September, a piece I'm still tremendously proud of:

I'll just go ahead and say it: Neyland Stadium looks really old. Like, really, really old. I don't necessarily mean that as a bad thing -- Wrigley Field is old, and I have enjoyed myself there tremendously -- it's just that … other old college football stadiums don't look that old. I was taken aback a bit, is all.

In Knoxville, Chamique Holdsclaw Drive turns into Phillip Fulmer Way. That is pretty much all you need to know. The athletics complexes were planted to prevent the campus from rolling downhill into the river, and you can hear "Rocky Top" just walking down an empty street. (A fun extra touch: parking garages built into hills. I approve.) A lot of Missouri fans have been planning on hitting this November's Mizzou-Tennessee game, because of the relative proximity, the enormous crowd, etc. One can see this becoming a fun game experience, even if the stadium's facade could use a little (a lot of) work.

One extra point in Knoxville's favor: it has its own popsicle store. So there's that.

Now, back to tackling this year's squad.

Mizzou comes back to down Tennessee in four overtimes, 51-48