2012 in Review: February was the best month of the year, and it probably wasn't that close

Oh, February—you may have been an uncalled Thomas Robinson foul (or an uncalled Phil Pressey foul) away from being the greatest month of all-time.

Share All sharing options for: 2012 in Review: February was the best month of the year, and it probably wasn't that close

While 2012 has been a mostly disappointing year to be a Mizzou fan, it did contain one of the best single months to be a fan of the Black and Gold that I can ever remember. February was quite great, and it started with a bang…

February 1—Come on, admit it … while we were all hopeful that things would go our way, didn’t a part of your mind anticipate DGB picking up a Mizzou hat, bringing it halfway towards his head, then pump-faking and putting on a Hog hat with his other hand? While Bobby Petrino fist-pumped in the background, gave DGB a brief but virile man-hug, and rode off with a co-ed in celebration? Well, there was no pump-fake. DGB made the choice to attend our fine university, and thousands of giddy comments and a GIF party ensued. (Seriously, I can barely load these threads from the archives. I guess I should ask for a new computer for Christmas.) Cue "MIZ-DGB" billboard in Springfield. That alone made February pretty good.

Related: Dorial Green-Beckham Signs With Missouri, And Springfield Gives Away Its Star 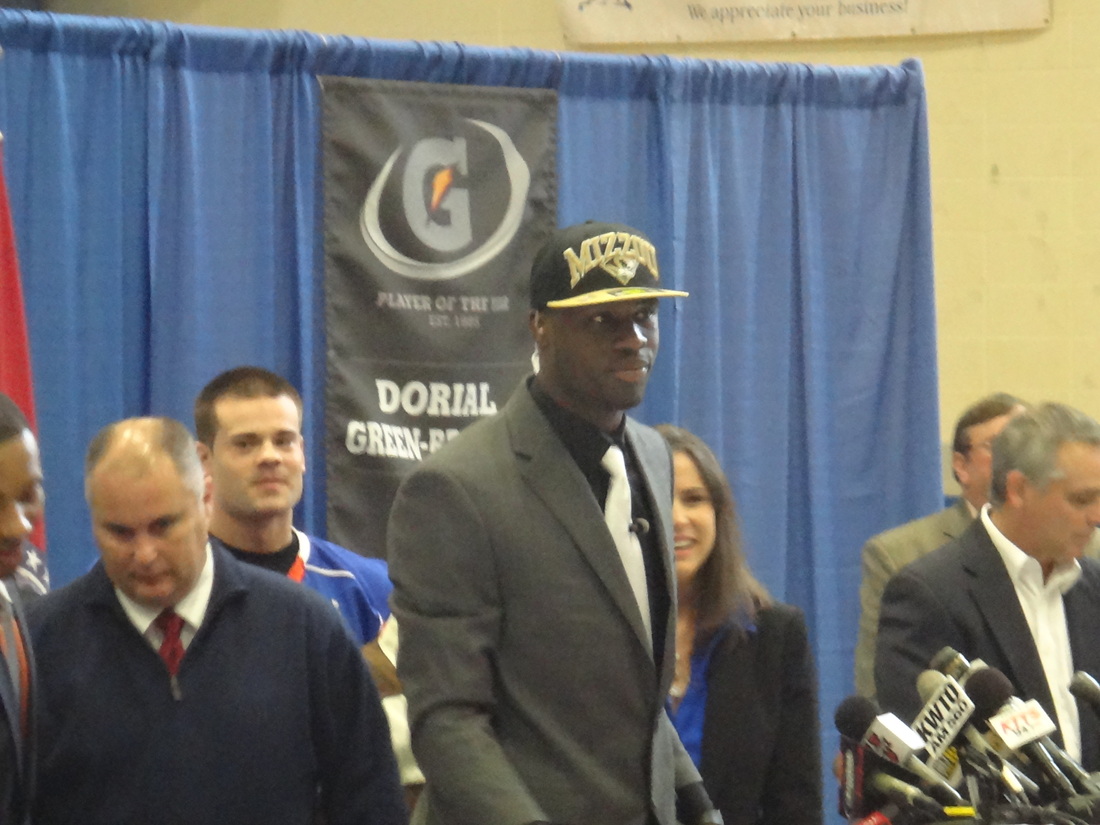 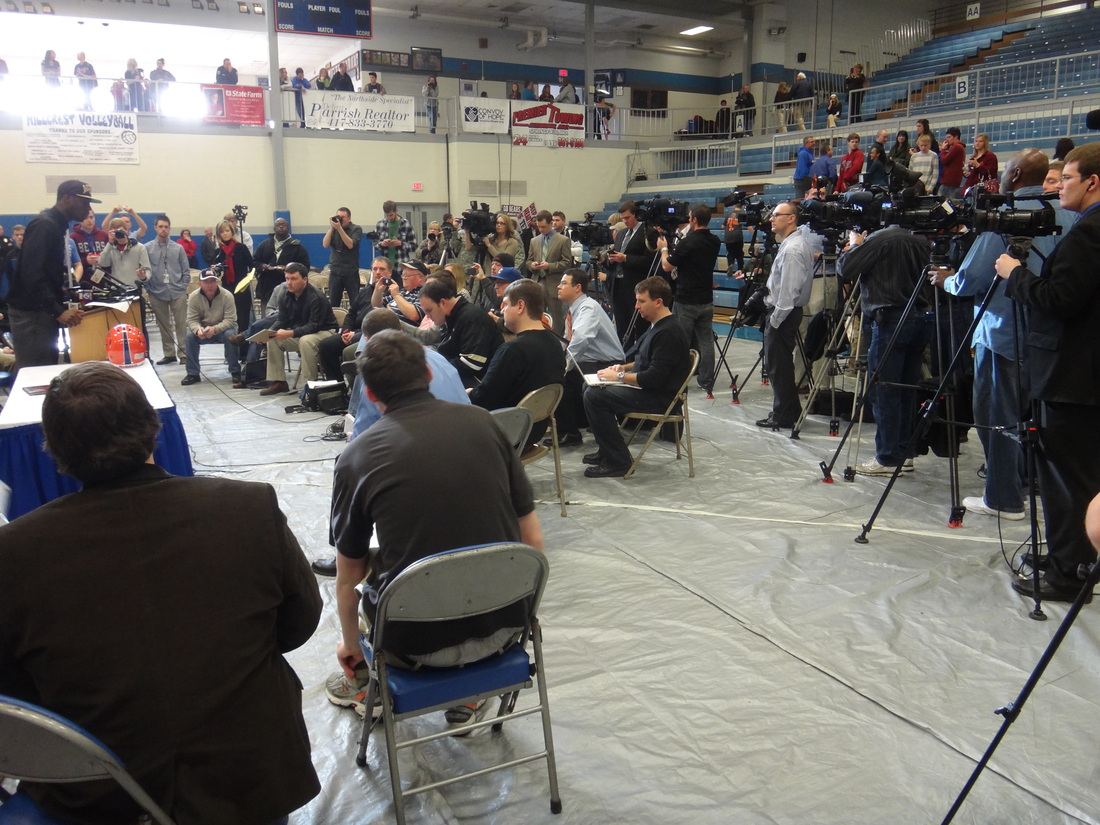 That evening, Brittney Griner beat the pants off of our women’s basketball team. But she did (does) that to everyone, so it’s okay.

February 4—This day will live large in the pantheon of Mizzou basketball memories. After a dynamic atmosphere for the basketball version of College Gameday, replete with Digger Phelps, a fog machine, and Mike Dixon professing his love for Holly Rowe and then speaking for all of us on how we feel about Kansas ("insert explicit content").

Somehow, the actual Mizzou-Kansas game would exceed the hype. A back-and-forth first half, where Marcus Denmon provided a prelude of things to come with a couple 3-pointers from Chillicothe, set the stage for what would be the best 2 minutes and 20 seconds that I can remember as a Mizzou basketball fan. Down 8, Mr. Soulcrusher went to work in what may have been the best individual performance in Mizzou Basketball history. A dribble drive led to a made bucket and a foul—5 point deficit. STEEEEEEEEEEEEEEEEVE would draw a charge from Sir Travels-A-Lot, Thomas "Still Whinin’" Robinson, that caught the ire of Dick Vitale, Doug Gottlieb, and those fantastic ESPN analysts. (Steve was set. Good call.) Denmon nailed another three to cut the KU lead to two, and Mizzou pressure would force a "Triple T": Tyshawn Taylor Turnover. (Those three statements sound like they belong together, don’t they?) And somehow, Marcus Denmon found the space to get another shot off. Would you believe it went in? I believe, Sir. I believe.

Chaos ensued, both in Mizzou Arena and my household as I had to do everything I could not to wake up my three-month old daughter. Phil Pressey had a chance to extend the Tiger lead but missed the front end of a one-and-one, which led to another KU chance to take the lead…but Mike Dixon drew a charge from Taylor on a fantastic defensive play. Two made Dixon free throws later, and good defense leading to a bad tying attempt that wasn’t close, and it was party time in Columbia. 74-71, Good Guys, in probably the last game we will have against those j-holes in our town. For anyone wanting to reminisce, here’s a way to do so. Cue it up to 1:08:03.

February 6—As the scheduling gods are prone to do, the Tigers had to travel to Oklahoma two days after the most emotional win in memory in what had every making of a trap game. The Sooners were bad but improving, they had a go-to guy in Steven Pledger (those guys always went off against last season’s Tigers), and we were bound to be tired. But in a sign that the Tigers had something REALLY special going on, they toughed it out and found a way to win, 71-68.

February 7—Elvis Fisher would be granted his 27th year of eligibility at Mizzou. He celebrated by watching his favorite TV show from his childhood, Welcome Back, Kotter. (Seriously, the poor guy got hurt again during the past season. You are a great Tiger and a True Son, Elvis. Sorry for the "old man" dig, as I am much nearer to Metamucil than you are.) Also, something called "Tiger Town" was proposed. Unfortunately, it sounded too much like the hit show "Cougar Town" and was ultimately renamed "Tiger Print Tailgating Dress Town". Okay, that didn’t happen…or did it?

February 9—Mizzou announces its new uniform/apparel branding plans with Nike, and a ridiculously entertaining search for pictures, video, or any sort of evidence of these outfits ensues. Little videos of players saying fun things like "Aw, man, these are HOTTTT!" create a unique buildup for the unveiling, which would happen in April. It turns out that Mizzou can do a pretty decent job at keeping something secret.

February 11—The Tiger basketball team returned to Mizzou Arena for their second huge test of the month: the talented yet "poorly managed" #6 Baylor Bears. (I still contend that Scott Drew is the new Quin Snyder in terms of inept coaching structure, and I assume this will play out in front of us over the next few seasons.) The first meeting between the teams saw the Tigers gut out an impressive victory in Waco, and the second would be no different. Well, it would be a little different; the Tigers pulled away from the Bears with a mighty impressive second half. Phil Pressey led the Tigers with 19 points, Denmon and Dixon added 16 each, and the Tigers held Perry Jones III to 4 points on 2-for-12 shooting (just wait until he gets inspired, though!) in a convincing 72-57 victory. The Tigers had 18 assists on 24 made baskets. Good passing is really fun to watch.

February 15—Time for revenge against young Ron Howard Ollie from Hoosiers Eddie Munster Keiton Page and his Cowboy friends. And yes, revenge was had…an 83-65 victory at Mizzou Arena that wasn’t nearly that close. The game was 80-45 with seven minutes left before Page went on a garbage-time scoring rampage, which further reaffirmed everyone’s dislike for him. Our five "usual suspects" scorers from last year were all in double figures, and the Tigers shot 53 percent from the field while limiting OSU to a 44.9 true shooting percentage in the first 32 minutes of the game (that is a bad percentage, FYI). I recall this being a fun game to watch…except for Keiton Anger. Seriously, little buddy, you shouldn’t flail around like you’ve taken a punch from Holyfield every time someone breathes on you, and you strut too much. ARGHABLARGHA IT’S BACK.

February 18—The Tigers beat Mizzou in College Station? Really? Why, yes, Timmy, yes they did. In what may have been the biggest sign that things were truly different this time around, Mizzou went to A&M and gutted out another not-so-pretty road victory. But W’s are W’s, and such. Kim English had 21 points (on 10 field goal attempts), Mike Dixon had 15, and the Tigers prevailed, 71-62. Dr. Soyoye had something to say.

Also, Ken Pomeroy decides that defense has very little to do with opponents’ 3-point shooting percentages, to which every Mizzou fan ever says…"why does it always rain on me?"

February 21—WHY CAN’T YOU QUIT US, FRANK MARTIN???? We were so done with you and Murderball; seriously, it was our 267th favorite reason to be going to the SEC. But you just HAD to troll us. Frank’s Fightin’ Purple People beat Mizzou, AGAIN, 78-68. It would be the Tigers’ only blemish in Columbia. No joke, KSU made Two-thirds of their 3-point attempts. ARE YOU LISTENING, POMEROY? Only Dixon and Denmon would reach double figures, together accounting for 40 of the 68 points. Phil had a rough night, shooting 3-for-11 with 6 turnovers. But there was a bigger game on the horizon…

February 25—The last time we’d ever be obligated to play in that abomination they call the Phog. (Yes, it’s got history and all that, but I will most certainly not miss that annoying horn, the terrible shadows from the top windows, and that dumb giant bird thing.) It was our best chance to go into Allen and win since…well…a long time ago. And we almost did win. Scratch that—we should have won, but for a few things: 1) Somehow, the Jayhawks recovered from a 19 point deficit with 16:20 to go. I am pretty sure that the 12-6 second-half foul differential (in Kansas’ favor) and the overall 33-18 difference in FT attempted (in, you guessed it, Kansas’ favor) had something to do with this. 2) Thomas Robinson was NOT fouled near the end of regulation, but got a free throw attempt that would tie the game anyway. It was so bad that it prompted Coach Haith to say "I want to see that foul" in the post-game conference. 3) Thomas Robinson very, very clearly got his body into Phil Pressey on Flip’s attempt at the end of regulation. 4) The foul call on Phil at the end of OT, that got Point Plankn’ Tyshawn Taylor to the line, was quite a bit touchy—but of the transgressions already mentioned, I believe it was the most reasonable of the calls.

Add that all up, and it was a heart-breaking, gut-wrenching 87-86 overtime loss to our hated rivals in the last game we will likely ever play against them in a regular season. (Just wait, though, until the NCAA tourney committee decides to put them in the same region. You know this will happen.) I try not to take sports losses in a bad way any more; there’s just too many good things going on in life that it makes it silly to dwell on losses. But other than another loss that may or may not have happened last season, depending on your philosophy and the alternate realities we have created, this was the biggest test I’ve had in "recovering" from a loss. Guh. This sucked because our guys deserved that W and the one seed in the tourney that would have resulted from it.

February 29—Senior Night for the best group of kids that have worn Black and Gold in quite some time. The impact that Marcus Denmon, Kim English, SteEEEEEEEEEEEEEEEEEEVE Moore, Ricardo Ratliffe, Matt Pressey, and Jarrett Sutton had on this program was transformational. When Marcus, Kim, SteEEEEEEVE, and Jarrett showed up on campus, we were a fledgling, middle-of-the-pack Big 12 team that hadn’t made the tournament since 2003; when they left, we had seen them make four straight tournaments, win four tourney games including one Elite 8 run, take home two Big 12 tourney championships, and earn two Top 3 seeds in the NCAA tourney. That’s phenomenal. Although it has already been said, but again—continued success to each of you in everything that you do.

A vastly underrated Iowa State team arrived in Columbia determined to ruin our party. Royce White, Scott "Almost Keiton-like" Christopherson, Melvin Ejim, and Chris Babb did the very best they could, but the Tigers prevailed, 78-72. Mike Dixon continued his torrid stretch with 21 points on 8-10 shooting, Ricardo Ratliffe did Ricardo Ratliffe things (a quiet 16 with an absurd shooting percentage), and Marcus, Kim, and Flip went for 10+ each as well.

When February 2012 began, we were DGB-unsure, the Tigers had already lost to OSU on the road, and had a murderous schedule forthcoming. It ended with one (1) DGB aboard the Tiger Party Bus, a 13-4 record in the Big 12, 26 wins by the end of February, and two of the most memorable games that Mizzou will ever play in. Short of a terrible ending in Lawrence, this was as good of a month as most programs will ever see.