1. In its current state, this Missouri team is not as good as last year's. "In its current state" is important there because this team is built to continue growing for a while. Last year, Mizzou was at its best right now, which makes sense because almost everybody in the small rotation was a veteran and was familiar with the pieces around him.

3. This team has infinitely more tactical flexibility than last year's team did. The lineup Frank Haith started in the first half didn't work, and he needed an energy boost ... and he actually had the pieces to make a lineup change. Last year, he had Mike Dixon available if Phil Pressey, Marcus Denmon or (more likely) Matt Pressey weren't fulfilling their roles, and he had Steve Moore to spell Ricardo Ratliffe if need be ... and that was it. Last night, against a smoking hot SEMO squad, he had Tony Criswell play quite a few of Alex Oriakhi's minutes in the second half, and he started Keion Bell in Negus Webster-Chan's spot, and the level of play improved almost immediately. Bell and Criswell provided some incredible energy, and it changed the game. We saw this team's flaws pretty clearly yesterday, but we also saw one of its biggest strengths bailing it out. 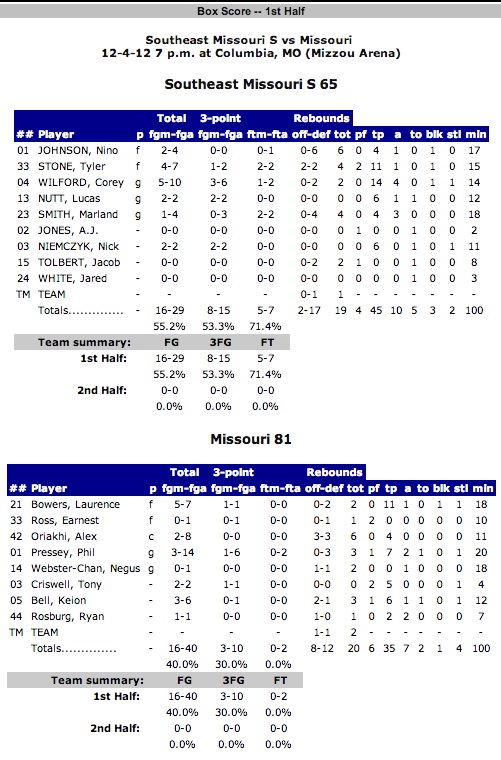 At some point this season (probably multiple points), Mizzou will lose a game exactly as these stats played out in the first half. An opponent will get hot from 3-point range (as has happened many, many times in the last couple of seasons), Mizzou will be ice cold, and Mizzou won't be able to produce the level of ball control or ball theft to make up the difference. Every team loses games, and this will be how Mizzou loses a few. (Lord help us if MIzzou is cold against Illinois. The Illini can shoot.)

That said, this year's added tactical flexibility bailed Mizzou out. Criswell was available to give an offensive boost, and he did. Bell was asked to raise hell defensively, and he did. It won't always work, but it did last night.

Deal with plenty of adversity and a hot opponent admittedly playing its "Super Bowl," and still win by 16. You'd rather win by 30, but this isn't bad. 7-1.