Checking in on Kim English

Share All sharing options for: Checking in on Kim English

He slept in the Mizzou Arena locker room. Now an elegant orator, he spoke with a stutter. A Kipling fan, he recites poetry with regularity on Twitter. He made sure his teammates would find a way to come together after a devastating coaching loss, and famously promised to "Reconcile by Winning". From hitting some all important free throws in the NCAA tournament as a freshman with nerves of steel to a promising sophomore breakout season to a disappointing junior season, Kim English delivered a magical senior season that Missouri fans aren't soon to forget.

The vocal leader for a group of seniors that bonded through adversity, Kimmie was more than just a basketball player for Mizzou. He was an ambassador, a representative, and a spokesman for our beloved University. I don't know if I could handpick a better voice for my school, and will always count myself as blessed for having been here at the same time as him. The good news for Missouri fans was that he delivered on the court about as well as he delivered on the microphone. In the 2011-2012 season, there were dim hopes for the Mizzou basketball program. Fearless leader Mike Anderson had abandoned his tightly-knit team for what he believed to be his true home at the University of Arkansas. The widely unknown Frank Haith was to step in and attempt to lead what many considered to be a severely undersized team, and many didn't believe it was possible for this team to have any kind of sustained success.

Yes, Frank Haith did an outstanding job coaching that team, but nobody was asked to do more than Kim English. A true shooting guard, the 6'6" 200 pound senior was asked to play at the power forward position for much of the season. Being thrown into foreign territory, Kim was not only serviceable, but was downright dominant at times. From shutting down 7 footer Jeff Withey to stretching elite defenses with his three point shooting, Kimmie was the wildcard that teams would have to account for, but would never find a way to do so. He averaged 14.5 PPG, 4.2 RPG, and shot an astonishing 45.9% from beyond the arc. His play and his brain were some of the main reasons his team earned a 30 win regular season and a Big 12 Tournament title. But what would come of his hard work at Mizzou after graduation? Well, his work didn't go unnoticed.

Kim English was selected as the 14th pick in the second round of the NBA draft by the Detroit Pistons. From MO to MO-Town, Kimmie hit the big time. Missouri fans everywhere hoped for his success in his future, and because of the good character he practiced, the responsible choices he made, and the unparalleled work ethic in the gym, he made it. After a very impressive summer with the Pistons in which he averaged 11.4 PPG and 3.8 RPG in 30 MPG, the Pistons decided to bring him on board as a backup SG. The young Pistons team has all the pieces to become NBA playoff contenders in the near future, and Kimmie has the tools to be a solid contributor and shooter in Detroit for years to come.

As a rookie, he's only getting 3.2 PPG, but he's only playing 9.2 MPG. This will be a good season for him to sit back and learn, and as we here in Missouri know, the kid is an absolute student of the game. His basketball knowledge is off the charts, and if you ever treat yourself to looking through his tweets, you'll be astonished at how much he knows about the sport. His brain is a sponge, and as long as he continues to be a responsible young man, that'll pay off for him in the long run.

He's already cashed in as a player in the NBA, but it's more than that for him. He's living his dream, and unlike many young players, he knows how to keep his eyes on the prize and do what it takes to keep the dream alive. Although it was a completely overplayed story, sleeping in the locker room at the Arena was a testament to his commitment not only to basketball, but life itself. A night at the Arena meant a night he wasn't at the clubs, bars, or parties. Yes, I'm sure he had his share of fun in college, but the thing that made him different was that his fun wasn't what landed him on the front page. His dedication to basketball, his good character, and his love for Rudyard Kipling's "If" were what writers liked to write about him.

Sportswriters love him, Mizzou fans adore him, and kansas fans hate him with a burning passion (to which he responds with "Obsession, thy name is kansas" on Twitter). Kim English is and always will be a True Son, as he has stated publicly that his dream is to have a long and prosperous career in the NBA before coming back to coach the Cats From Ol' Mizzou. We'll continue to watch him play in the pros, and many of us hope to see him back on the sidelines in the future.

"If you can keep your head when all about you

Are losing theirs and blaming it on you;
If you can trust yourself when all men doubt you,
But make allowance for their doubting too:
If you can wait and not be tired by waiting,
Or, being lied about, don't deal in lies,
Or being hated don't give way to hating,
And yet don't look too good, nor talk too wise;
If you can dream---and not make dreams your master;
If you can think---and not make thoughts your aim,
If you can meet with Triumph and Disaster
And treat those two impostors just the same:.
If you can bear to hear the truth you've spoken
Twisted by knaves to make a trap for fools,
Or watch the things you gave your life to, broken,
And stoop and build'em up with worn-out tools;
If you can make one heap of all your winnings
And risk it on one turn of pitch-and-toss,
And lose, and start again at your beginnings,
And never breathe a word about your loss:
If you can force your heart and nerve and sinew
To serve your turn long after they are gone,
And so hold on when there is nothing in you
Except the Will which says to them: "Hold on!"
If you can talk with crowds and keep your virtue,
Or walk with Kings---nor lose the common touch,
If neither foes nor loving friends can hurt you,
If all men count with you, but none too much:
If you can fill the unforgiving minute
With sixty seconds' worth of distance run,
Yours is the Earth and everything that's in it,
And---which is more---you'll be a Man, my son!" 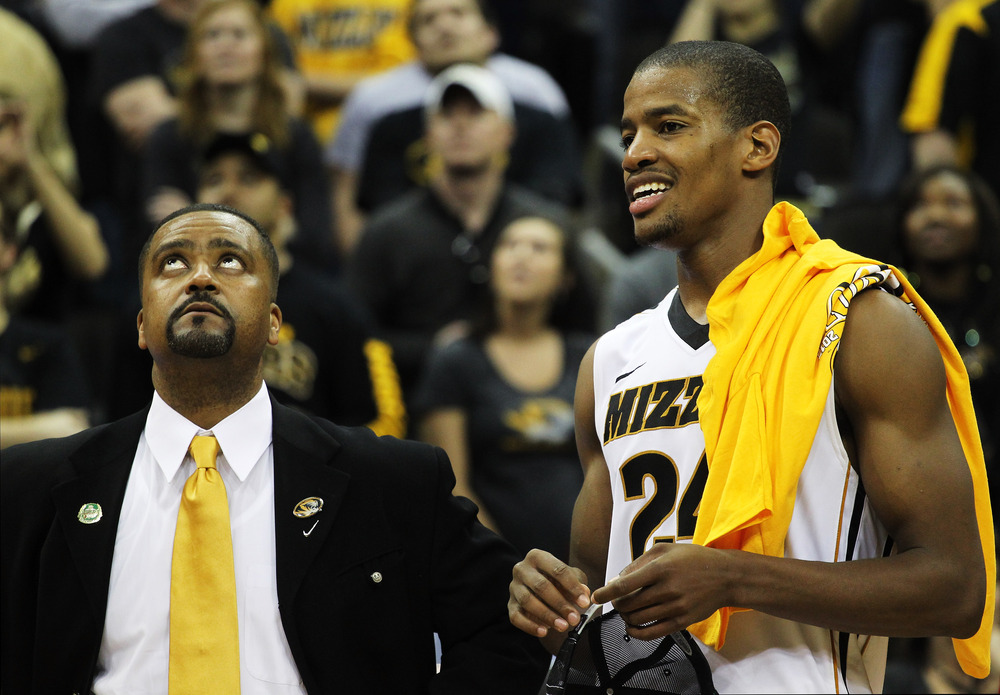 KANSAS CITY, MO - MARCH 10: Kim English #24 and head coach Frank Haith of the Missouri Tigers celebrate after their 90 to 75 win over the Baylor Bears the championship game of the 2012 Big 12 Men's Basketball Tournament at Sprint Center on March 10, 2012 in Kansas City, Missouri. (Photo by Jamie Squire/Getty Images)