And here we go with the rest of the weekend's links.

Kansas State is kind of a mess right now, but it probably goes without saying that it would be lovely if they would get it together and pull an upset tonight.

You only thought you were done with football recruiting for a while. Mizzou's Junior Day was this past weekend; Mizzou hosted select juniors from the state and region, and as is somewhat customary, they scored a couple of commits as well: Jeff City linebacker (and pole vaulter extraordinaire) Joe Burkett and CBC cornerback Aarion Penton. The state is low on the highest of high-end talent (i.e. the DGBs and Evan Boehms) this year, but it seems reasonably deep with mid- to high-three-star guys, and both Burkett and Penton will likely qualify as that.

Looks like Sean Weatherspoon may be replacing Curtis Lofton on passing downs in Atlanta next year. Finally, revenge for 2007, ahem.

And here's the main reason I wanted to break out basketball links from everything else -- there were simply a ton of goings-on this weekend from a non-revenue perspective, and I didn't want it to get buried. Mizzou inducted six athletes into its Hall of Fame, Softball got rolling with the B&G game, and seemingly every other damn Mizzou sport was in action.

Finally, a quick story. In the summer of 1999 (or was it 2000?), Tigerboard was abuzz with rumors about what would soon become Mizzou's new logo. The Internet was exactly like it is today, only a bit less populated; the rumors were every bit as frantic. I've seen it, it's awful! It's a rip-off of the Kansas State Powerkat! I've seen it, it's amazing! Really modern and nothing like the Powerkat! It's going to be released next week! IT'S GOING TO BE RELEASED TOMORROW!!! People were, generally speaking, a mess. Then, Tigerboard poster (and resident comedian) Iam4Mizzou posted a thread titled something like "I HAVE IT! HERE'S THE NEW MIZZOU LOGO!" I knew as I clicked on it that whatever he had probably wasn't going to be the real thing (his reputation preceded him), but I've still never laughed as hard about anything on the internet as I did when I saw... 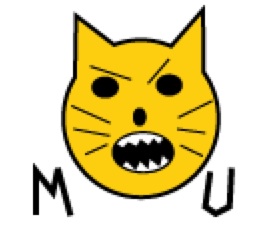 Long story short, that same guy purchased www.missouritigers.com a few years ago when he realized the university hadn't, and when they didn't want it, he turned it into a bit of a parody site. (Example here.) It's been down for a while, but he's trying to get the message board and chat room up and rolling again, and since he made me laugh so incredibly hard 13 years ago, the least I could do was pass it along.