1 - So Mizzou lost for the third time of the 2011-12 season last night. It was a bit unexpected, but how much does it impact your view of Mizzou's postseason prospects? What national teams can do to Mizzou what K-State can do?

3 - So it appears that the Block M is all but officially off of the Missouri helmets. What is your reaction, on a scale of 1 (TRADITION, HISTORY, RAEEEEGGE) to 10 ("Whatever, people thought we were Michigan anyway. This is great news!")?

4 - So Community is returning ... and NBC just so happened to schedule it for the same night that the NCAA Tournament begins. Is this a) complete and total, cynical passive aggression on the part of NBC (schedule it to fail, then say you gave it every chance in the world to succeed), or b) an odd assumption that basketball fans are not also Community fans?

Michael Atchison: 1. Kentucky and Syracuse can certainly do what K-State did, and North Carolina should be able to as well. I don’t think last night impacts my view of Missouri’s postseason prospects much at all. It just reinforces that the draw is huge for this team. They’re a matchup nightmare for most teams, but a handful of teams are a matchup nightmare for them.

2. I want a conference title on the way out the door, so I’ll take scenario one. In scenario two, the team is probably still a two-seed in the NCAAs. I can certainly live with that.

3. Everything dies, baby that’s a fact, maybe everything that dies one day comes back. Or as another wise man said, all things must pass.

4. Or c) a tacit admission that DVRs exist.

The Beef: 1. Agree with Atch

Bill C.: He's not the best color man in the league for nothing, folks!

The Beef: Who am I to argue with perfection?

Michael Atchison: I gotta say, this is some of BEEF’s best work.

The Beef: Really…the only other thing I could say would be just to Sleepy and that would be:

Doug: 1 - The tournament draw for any team is deadly important, but so is avoiding a cold shooting night against any team regardless of how good or bad a match-up they are for the Tigers.

2 - I think whichever team wins the Big 12 regular season conference has the best chance for a one seed, regardless of what happens in Kansas City. If Missouri loses in Lawrence, and winds up with a #2 seed, they'll probably wind up in the bracket with the fourth #1 seed, which potentially could be KU.

4 - I think it's an assumption of A and Atch's C. Sure DVR's exist, but Community has always done well with ratings when DVR's are factored in to the numbers. I think NBC has decided they no longer want Community on the schedule, else why return to the same night and time, up against the Tournament and then the Big Bang Theory which has been destroying NBC's Thursday night lineup for a year and a half. The network will run out the third season and kill off one of the smartest sitcoms on TV.

SleepyFloyd7: 1 - It always felt to me that Mizzou's claim to a #1 seed was the most tenuous - i.e. they were receiving the benefit of the doubt. It will be interesting to see how far they fall in the polls should they lost on Saturday. That being said, they have built a solid 2-seed resume.

2 - Beat Kansas. I think that's worth more in the long-run. I'll take my chances (as everyone has to) in the tourney.

3 - Valar Morghulis. Plus, I don't think Nike (and maybe more importantly Coach Pinkel) will screw this up. And, if screencaps are to be believed, I think they got the "Mizzou Gold" right. 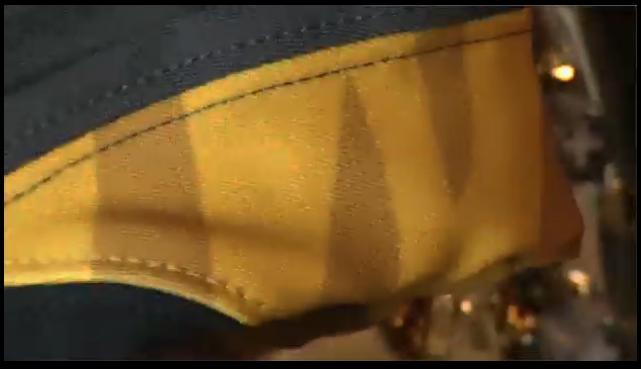 4 - If NBC cuts the cord, the cult status of that excellent show will only continue to grow. The end product will be increased appreciation for an excellent product. I can't be too mad, seeing that I have not watched an episode on live-TV in the entire run of that show.

Beef - I fielded some complaints from some mucky-mucks here at RMN to try to curb the hackneyed "footlong" captions. Your wanton disregard for my fake rules in this fake contest for fake prizes has raised my fake ire, and will result in a VERY REAL STEVEKICK to your Meatball Sub.

RPT: Before we begin, props to Atch for referencing what is far and away Springsteen's best work. Now he can go back to referencing bands I've never heard of.

1. If this game changed your viewpoint on Missouri's postseason prognosis, I'm utterly baffled. Spoiler alert: Mizzou doesn't matchup well with everyone. Sports can be kind of a bummer that way. Everything basically boils down to whether having Kimmie at the 4 is a major advantage or a major cause for concern.

2. Scenario one, no doubt. The one-seed means nothing to me.

3. I'm actually sad to see it go, though I refuse to buy into the "WE'RE MURDERING OUR HISTORY" rage. I wish they'd stay fairly classic with it rather than go with the comically large Tiger head a la the Boise pale horse helmets, but if the mockups that have come out after the Maclin video are correct, that may be out of the question.

4. March Madness viewers are going to miss an argument about Barenaked Ladies, the most celebrated Canadian alt-rock band of the mid-90s, you selfish, jaded a**.

Michael Atchison: A great song, no doubt, but "far and away" his best work? I’ll stop there instead of launching into a long dissertation on the man’s second, third and fourth albums.

I’ll have a hard time buying the "we’re murdering our history" line from anyone who favored the SEC move. This is all about dollars, branding, marketing and winning, right? And while I really don’t care one way or the other about the uniforms (and I’m expecting them to be pretty cool, actually), going from a block M to the slick logo is another step in the NFL-ization of college football. I hope the next step is to replace the bleacher benches with comfy seats with cupholders.

D-Sing: 1. Kentucky, Syracuse, Kansas. Maybe Carolina if they're in the right headspace.

BUT...potential matchup problems can be neutralized if you can hit more than 38 percent of your shots (30.8 percent from 3). If your opponent shoots 54 percent in that scenario, you're going to lose.

2. It will be more meaningful to beat Kansas in Lawrence because it hasn't happened since 1999. I would like the win on Saturday. But if winning the tournament can serve as a springboard for a run to New Orleans, then I'd rather have that occur.

3. It is interesting that people talk about the Block M looking like Michigan's M when Michigan actually wears a winged helmet with no lettering on it at all.

Minnesota, Marshall, Miami (OH) currently use "M"s on their helmets in FBS, and they all look different than our (soon to be extinct) Block M. With that being said, we more or less moved to the tiger head oval logo in 1999; it makes sense to put the primary mark on the helmet. The "M" on the side of the helmet changed 5 times between 1971 and today anyway, so how sacrosanct can it actually be?

4. It's not a passive-agressive move by NBC. Even though NBC's programming leadership is crappy, this has to be an intentional move to burn off the rest of this season's run. If they cared about making sure the show was safe, they would have held it back a couple of weeks or brought it back right now during sweeps. The only thing they haven't done to kill the show at this point is put it on Friday nights or Saturday nights at 10:00 p.m.

And I say that as someone who doesn't give a damn about the show. It just never connected with me.

Michael Atchison: Props to the Pundit for the use of "sacrosanct."

RPT: Has anyone else caught on to the fact that I actively try to bait Atch into long dissertations? He's like our own Hank Moody, minus all the substance abuse and Warren Zevon references.

Michael Atchison: I’ll remind you that you don’t know me personally, and therefore do not know my substance-using habits, excitable boy. Though I will say that you’re a credit to your gender.

D-Sing: Thanks for the props.

As I think about it I guess that, as far as football goes, the helmet is more important than the jerseys actually are. Keep in mind that from the time I matriculated at Mizzou through today, Mizzou had three different styles of jersey. One of those styles we only had for about 3 years or so, I think. We've had our current kit for about 8 years; the helmet has been as-is since 1996.

But I can also see how it is time for a change, and with us entering a new era in a new league, a new look seems fitting.

The Beef: And now we know how Atch gets down…..

D-Sing: I'm just trying to raise the level of discourse around here.

Either that, or I'm trying to see what I can do to throw google search algorithms off.

RPT: Did we figure out that was someone's blues name?

Michael Atchison: The blues has no dishwashers.

Michael Atchison: Blame it on the substances.

ghtd36: By the by, I wrote a lengthy, dorky article about the throw that won Robert Griffin III the Heisman. This is a Baylor blog, right?

RPT: No, but it was at the forefront of Robert Griffin III blogs for at least a year and a half.

I (8) watched the tape-delayed broadcast with my brother (7) in a room at the Plaza Hotel in Houston TX.

The Beef: I was not quite 3…so unfortunately while I have memory capture of just a couple of things prior to this from a date standpoint, I have no memory of this at all.

RPT: 26 years away from receiving a Jim Craig signed photo as a gift.

Michael Atchison: It was unbelievable. At a time when the mood in America was pretty bleak (we had gone from Watergate to a major inflation-fueled recession to the Iranian hostage crisis), it was a huge shot in the arm. Eric Heiden was pretty amazing, too.

RPT: Question: Is there ANY sporting event in the present day that could galvanize the country like that?

Bill C.: As strange as it sounds, I think the World Cup is the only thing close. There has to be an underdog factor involved, and for most sports we're either the best or we've quit trying.

The Beef: None that I could presently fathom. I would guess only the World Cup (soccer) could be even close, but you would some other country to be the villain in both the sport and globally the way the USSR was and I just don’t see that happening

Bill C.: Oh man, there would be more cheating in that contest than in anything, ever.

SleepyFloyd7: Yes, I do believe that a World Cup run - with wins over Spain, Brazil, England and the like - might be enough to pull the country like that together. But it would certainly lack the political overtones that the Miracle had.

Doug: I'd like to see the USA come together and support a biathlon competitor in Sochi, Russia in two years.

Michael Atchison: Maybe some sort of global quidditch championship could bring us together. Know where we could find any players, Doug?

Doug: Is it another sport Missouri doesn't have a championship in?

Doug: Well, then I can't help you.