1. Who wins tonight: Baylor or Kansas?

3. Over or Under: Kansas and Missouri are playing basketball against each other in five years?

4. Rivalry Week™ is this week, which, combined with the fact that I'm actually writing about basketball now, has me thinking about something: should the college basketball season begin later? The Daily's Dan Wolken wrote about this last week. My first reaction: No way. My second reaction: Why not? Basketball season lasts as long as football season, but a good chunk of people don't really start paying attention until the last couple of months. Would May Madness work?

4 - Hmmm... moving the start of the season back a little bit is intriguing. I don't know if you can realistically move the tournament, there are too many other sports basketball would start competing with in the early spring: baseball, pro basketball (it actually starts getting interesting in April), and the Masters. If you moved the start of basketball until after Thanksgiving, you might be able to get three games a week for some teams, and ratchet up interest that way.

2 - I am guessing this one is all about who trips up against someone else. MU is riding really close to the fire on this one, and like Bill C. would say, you never bet against a streak. I know the ISU road game is currently helping us, but I suppose I will say kU and be happy when I am wrong.

3 - I think the administration at kU would have to turn over for this to probably get going again.

4 - Three games in a week wont likely happen considering and I agree with Doug about moving around March Madness. You just have WAAAAAAAY too much going on in the sports world in April and March Madness fits very nicely in it currently. I don’t see a May Madness being any different when you would have two professional leagues into their playoffs at that point.

3. Under. It will happen in four years.

4. No. College basketball is all that makes the winter tolerable.

Doug: And, further on the point of college basketball competing with football, the reality is, the NFL only has two major game days a week (I'm not counting the Thursday night game on NFL Net yet), so basketball does okay in that regard. Competing with the bowl games starting in December is a tougher conundrum, mainly because ESPN gives college basketball it's biggest stage, but it's ESPN that owns all the low-level bowl games.

ZouDave: I freaking just got to work…spent 40 minutes sitting on I-35. Bowl of suck.

The Beef: Well did you at least miss your ever-so-exciting Wed. morning team meeting?

ZouDave: Luckily we haven’t done one of those in like 3 months. It has made us infinitely more productive.

The Beef: Yeah…I went with the 22-0 following a loss anyway

3 - I'll take the under. I'm with Atch - I think we will see a game after 4 years apart. The MU/KU hole in the schedule will be gaping, and both sides will agree to fill it.

4 - Don't mess with a great thing. March Madness is a hugely successful enterprise (and brand).

BTW, what the hellz is going on with all the 503 errors on RMN?

The Beef: Looks like the Caption Contest will have to wait, eh?

The Beef: I got a 500 error at one point. Does that mean I am special?

The Beef: Thanks…just wanted to make sure my mom was not lying to me

The Beef: WE HAVE LIFE!!....though it suddenly looks somewhat like Tigerboard

RPT: So then we have death.

The Beef: Well..needless to say the formatting is a hair off currently

ZouDave: Formatting looks fine to me, though I did have to login again.

The Beef: I am not that fortunate.

Doug: Wow... I've been Tigerboard-free since 2005. That looks terrifying. 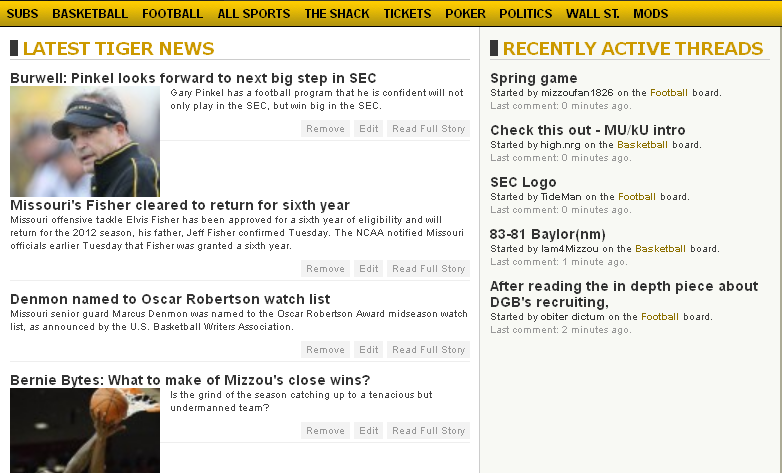 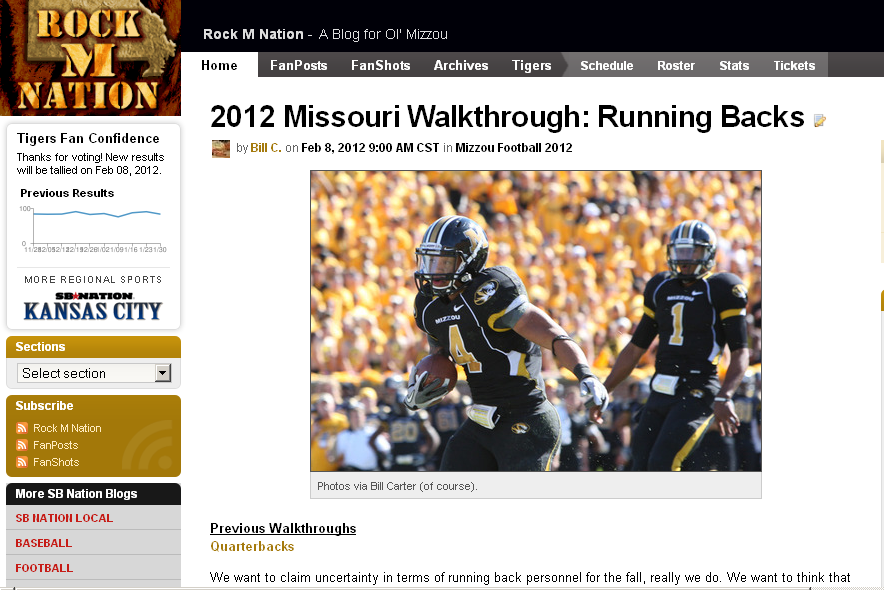 Doug: Yeah, but looks aren't everything.

ZouDave: Well I would be concerned about this roundtable, but we didn’t even have one last week and it was one of the best weeks we’ve ever had. So…keep up the good work, fellas!

SleepyFloyd7: Maybe we can use the excuse that google was down all morning....

ZouDave: I blame the traffic I was in this morning. Threw my whole day off.