And Still, You Never Know

Share All sharing options for: And Still, You Never Know

Most of the time, writing about life as a Mizzou fan (or any fan, for that matter), is relatively repetitive. Here's why [Random Bad News] is probably not as bad as you think (so stop freaking out). Here's why you should soak in [Random Great Win] as long as you possibly can. Here are some links. Here are some numbers. I love it -- if I didn't, I wouldn't have attempted to make a career out of it -- but I still relish the opportunity to stretch the emotional legs a bit.

Just a hair under three years ago, I wrote what I still feel is one of my favorite posts. In all, it was one of the easiest I've written. The Mizzou men's basketball team had already done the leg work; all I had to do was say thank you.

There had been two entire four-year classes ('04-'07, '05-'08) that had come to the university and graduated without seeing their team go to the NCAA Tournament. That hadn't happened since well before I was born. The thought of having a great basketball program was something of a joke (I think we even made some of those jokes on RMN in a football podcast way back when). I mean, hell, look at how hard we were struggling to find great, encouraging things to say about the team not that long ago. Even if we snuck into the tourney as a 10-seed or something, would anybody notice? That's the basketball version of making the Independence Bowl. Would a connection still have been made?

Now look at us. Again, I'm not necessarily talking about the 30 wins, the Sweet Sixteen, and the Big 12 Tournament title, though that's been absolutely fantastic. I'm talking about more than that. In just four months (and really, it's been less than three), this university has grown to love its basketball team again.

Three years ago, the sky was the limit. Kim English was almost single-handedly carrying Mizzou to the Sweet Sixteen as a freshman. Marcus Denmon was stretching the lines of believability with a three-quarter court shot that made Dick Enberg yelp. Laurence Bowers was already becoming the Party Starter. Mike Anderson's system was working. Mizzou Arena was a death trap (or, if you are local TV personality Scotty Highmark, a wood chipper). ESPN's Fran Fraschilla could not contain the outright crush he had on the Missouri program and style. ("Pressure is cumulative!") Mizzou basically came within about two minutes of the Final Four, and there was almost no doubt that, at some point over the next three seasons, they would get another chance. 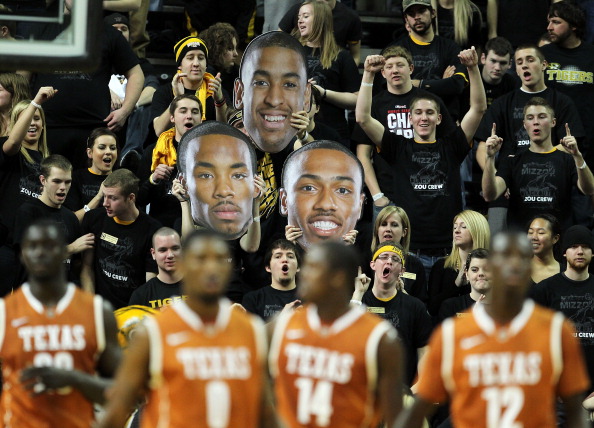 But then that chance didn't come, at least not immediately. Following the departures of DeMarre Carroll, Leo Lyons and Matt Lawrence, Mizzou took a predictable step backwards in 2009-10, but they still advanced to the Round of 32, and they still gave eventual Final Four team West Virginia all it could handle. English, Denmon and Bowers had taken ownership of the team, recruiting was picking up, Mike Anderson had (again) decided against other job opportunities, and despite whatever lingering annoyance existed from the Jimmy Sexton Experience, there was still, to say the least, all the hope in the world about the future.

From the 12 months between November 2010 and October 2011, however, almost every good feeling dissipated. A preseason Top 15 team showed cracks early and chasms late. Star recruit Tony Mitchell never made it to campus. Kim English misplaced his confidence, his game, and his place in Mizzou lore. Marcus Denmon showed a desire and ability to put his team on his shoulders, but he couldn't figure out how to bring his team together. Newer pieces like Ricardo Ratliffe, Mike Dixon and Phil Pressey struggled to either establish, or understand, their roles. Players shot the ball from anywhere, at anytime. Mike Anderson seemed to lose both his team and his interest. Then he left for Arkansas. After a high-profile flirtation with a high-profile name, Mizzou hired a marginally (at best) successful, relative no-name as Anderson's replacement. Said replacement got caught up in the Miami scandal. Laurence Bowers tore his ACL. Destiny had turned into some sports version of tragedy. 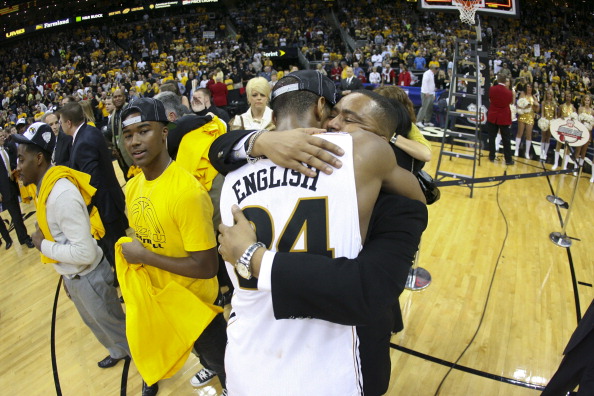 In April 2009, I'd have been willing to bet a reasonable sum of money that the combination of Mike Anderson and the incredible, program-changing freshman class he had brought in would finally bring Missouri the level of success that had always eluded it. In November 2011, I told a good friend of mine that I just wanted this team to make the NCAA Tournament again, send the now-seniors off with a decent season. I had been fooled by fate. Instead of providing the type of steady, almost boring, linear success (we win a little more, then we win a little more) that almost never truly plays out, fate was simply setting the stage. Nobody wants to watch a movie with no adversity, right? A good movie makes you believe that the protagonist truly might not get the happy ending, and the last three years broke down the Missouri basketball program to the point where we truly believed that things may not work out as we once expected for this storied group of seniors.

In 2009, Missouri found its fanbase again. In 2012, Missouri found itself. If 2009 was about discovery, 2012 was about redemption, the recovery and fulfillment of previously established potential. A once-precocious freshman, destined to become an all-time Mizzou great, Kim English spent 12 months struggling, disappearing at key times, and weighing the thought of finishing his Missouri story after just three years. Now, he is averaging 15 points per game and coming off of the best weekend of his Mizzou career. He has gone from outspoken to thoughtful, from a points-only contributor to a master of little things, a 48-percent 3-point shooter and a masterful drawer of charges. He has been so important to this season's success that Mizzou fans have openly wondered if Frank Haith will include an "English 4" in his lineups well into the future. 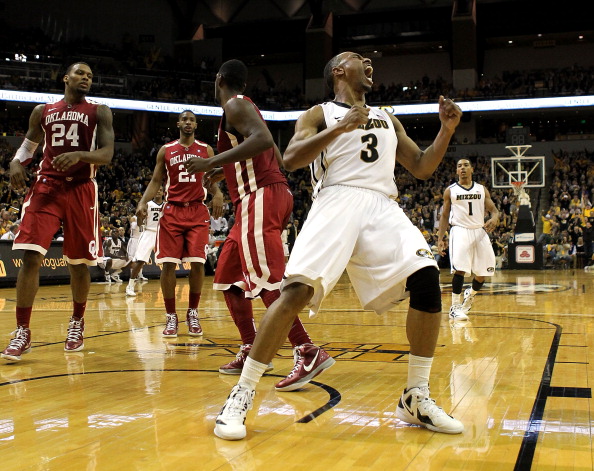 Between his junior and senior seasons, Matt Pressey's statistics barely changed. He raised his scoring output from 5.7 points per game to 6.2, his field goal percentage from 40 percent to 41. But he has played 25 minutes per game for one of the best teams in the country. He has made key defensive contributions, he has knocked down open shots (at times), and he has started 34 games for a 30-4 team. Other players have the stats, but a seven-man rotation doesn't work without seven men making contributions, and Pressey has served as the consummate role player. 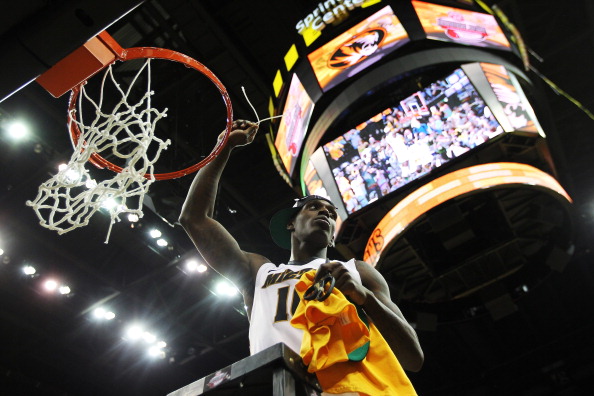 Ricardo Ratliffe came to Missouri as one of the most accomplished junior college players of all-time. He spent most of last season figuring out what he could and couldn't get away with doing at the Division I level; he spent this season posting one of the best shooting seasons in college basketball's history. He showed such a great pair of hands on the inside that Gary Pinkel asked him to try out for tight end. When Missouri needs a basket in crunch time, they are just as likely to run a pick-and-roll to Ratliffe as they are to hand the ball to Marcus Denmon or Mike Dixon; and if the ball goes to him, he is going to score. 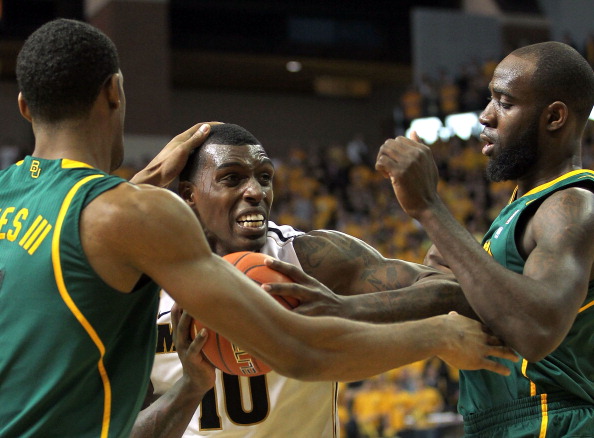 Three years ago, Steve Moore was a man out of place in the Fastest 40 Minutes style. A true Mizzou Man, he seemed destined to play his college ball in Columbia, but no matter how much Mizzou fans tried to convince themselves that "Hey, Oliver Miller played for Nolan Richardson; this can work," it was clear that Moore was going to struggle to play a heavy role on a Mike Anderson team. As he enters the final weeks of his career, however, he has, to say the least, found his role. He is no longer a project; he is STEEEEEEEEEEEEEEEVE. Missouri doesn't win 30 games without his crunch time defense, without his ability to spell both Ricardo Ratliffe and Kim English, and seamlessly vary his minutes without eventually falling victim to foul trouble himself. He scored more than four points in a game just five times all season, but he was an incredibly valuable cog. 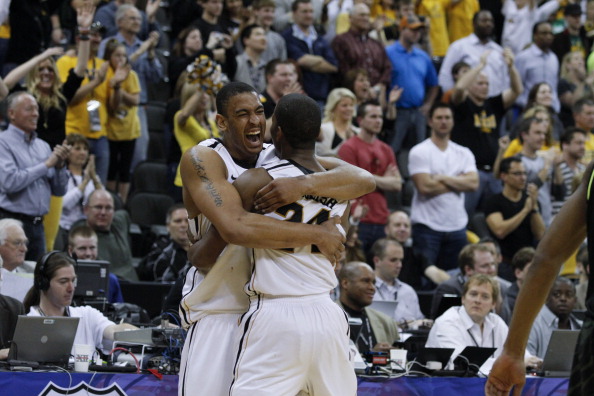 And then there's Marcus. As difficult as 2010-11 was for everyone associated with the Missouri basketball program, it was doubly hard for Marcus Denmon, who had to deal with excruciating personal loss (the shooting death of his cousin) for virtually the entire season. We almost know less about Denmon's story than we do about anybody else's in this storied class. All we know is, life has occasionally been quite difficult for this senior from Kansas City, and life has been infinitely more rewarding for all Missouri fans because he chose to play his college ball here. He doesn't speak, and he rarely smiles; all he does is score, hit the ground, and, quite simply, lead. His legacy was already undeniable before he scored nine points in a minute against Kansas, and before he all but gave Mizzou a Kansas sweep in Lawrence. This team is great because it doesn't need him to come up big in every game, but when they have needed Marcus to come through, he has. And the odds are good that he will again if called upon in the coming weeks. 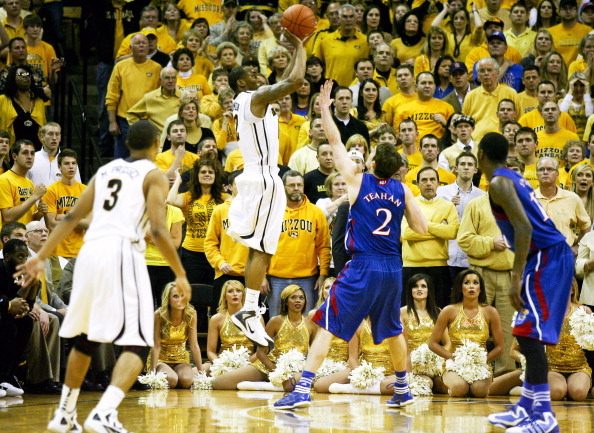 The NCAA Tournament is cruel. Just ask Doug Smith and the other members of the storied 1990 Missouri team. Just ask countless highly-seeded Kansas teams that have fallen through the years. Talent seems to only matter so much before fate just does whatever the hell it wants. We don't know how fate will define the coming weeks for Missouri -- whether they are destined to fall to Norfolk State or win the national title -- but the final paragraphs of this chapter only matter so much.

After 12 months of disappointment, frustration and uncertainty, this class of five seniors was tasked with both preserving its own legacy and setting the table for an immediately unsettled Frank Haith era moving forward. No matter what happens from here on out, they have done exactly that. They have won more games, and fans, than any senior class in Mizzou's history, and they have brought pride back to Missouri Basketball. They were here for the resurgence, and they have now assured sustainability. This final chapter has been a redeeming, fulfilling one. To not only Kim English, Steve Moore, Matt Pressey, Ricardo Ratliffe and Marcus Denmon, but also the other seniors who made undeniable contributions to this squad through the years -- Jarrett Sutton, Andy Rosburg, Andrew Jones, assistant coach Laurence Bowers -- I once again say thank you.

But all that said, why don't we keep this train rolling for another few games? 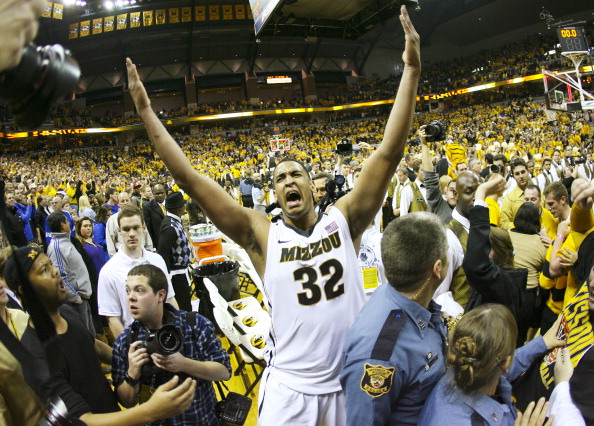