Your Trifecta: PPressey-Dixon-Denmon. Your winner: nobody. As it should be.

And, of course, one more special link. The video has been removed, but ... the video clearly existed.

It's one thing for fans of now-former conference rivals to feel this way about Missouri's loss. Obviously they are going to take pleasure in it just as Missouri fans would if in the same shoes. (In fact, I'm pretty sure we did with random Nebraska losses.) It is to be expected. But ... it is just slightly different for actual athletic administrators to say the same thing in a public setting. One can understand how FOIA requests might turn up some embarrassing material -- it is quite easy to forget how public an e-mail can end up as you're sending it -- but to actually say things like this in public, like you're just some silly fan? Yikes. As RPT mentioned in comments earlier today, Mike Alden would have become a folk hero if he had said something snide and catty after some Nebraska loss last year. But he didn't. (Then again, Jay Nixon, of course, might have; and it would have incredibly embarrassing. But that's kind of his M.O.)

And just think about what Zenger may have said if he were talking about an actual rival that they actually cared about, huh?

Anyhoo, time for some actual stats.

The theme before the season began was that, when Mizzou lost, it was probably going to be because of depth, size and the lack thereof. And to be sure, Mizzou certainly struggled on the glass (three Texas games) and with depth (at Kansas). But we had been hinting for a while that Mizzou's fatal flaw may not be either one of those things. Mizzou beat 22 "real" teams this year (I always define "real" as major conference teams, solid mid-majors, anybody on the road, or anybody faced in the postseason) and lost to five. Here are some averages:

Mizzou actually stole the ball more times in wins (7.8 versus 7.3) and turned the ball over almost exactly the same amount (10.5 versus 10.4), but most of the time Missouri's games versus real opponents were decided simply by shooting. There were certainly occasional rebounding glitches (the final minute versus NSU being the most obvious example), but Mizzou outrebounded Oklahoma State in Stillwater and basically split on the glass with Kansas (in Lawrence) and Kansas State (in Manhattan). The only losses with serious rebounding margins were at Kansas State (-7) and versus Norfolk State (-6). The most direct determining factor in whether Mizzou won or lost came with how opponents shot the ball.

Mizzou went 30-5 because the Tigers could almost always win the shooting battle; and technically speaking, they did on Friday, too. But Norfolk State shot over 20 percent better than their season average from 3-point range. That garnered them 12 extra points ... in a game they won by two.

We'll get to Mizzou's perimeter issues in the season post-mortem series -- one that will begin a couple of weeks earlier than we had hoped -- but the bottom line is, Mizzou's perimeter defense stunk in 2011-12. As we've discussed in recent weeks, it is difficult to define quality versus luck when it comes to perimeter defense (Ken Pomeroy's research has shown that 3-point shooting is a lot more random and defense-independent than we would anticipate), but there is no ignoring that one number in this chart stands out above all others ($). 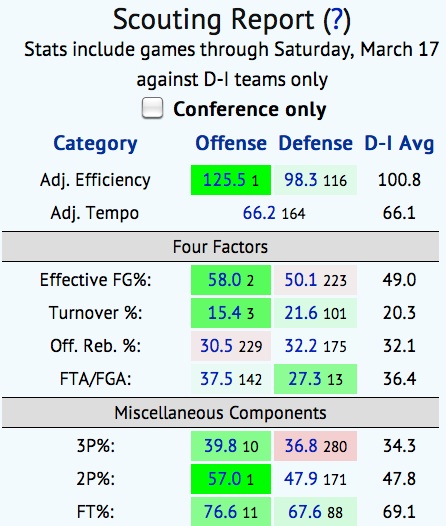 Mizzou had the best offense in the country and averaged 1.31 points per possession against a team they were favored to beat by over 20. But yet another team shot well over its season average from long range, and it ended Mizzou's tourney stay a lot earlier than anybody anticipated. And it simply can't be entirely based on bad luck, even though some of the shots NSU made in the second half were ridiculous and made me briefly think this game was being played in Bramlage Coliseum.

Not only is that only a 4-for-7 "performance," but two of the three misses were really, really missed. For the most part, the features on this checklist hinted more at personality than performance, but Kim English's Floor% was purely a performance measure, and English's 14% was almost half as good as his previous worst Floor% of the season (26% at Kansas).

Mizzou should by all means have too much for Norfolk State when all is said and done. However ... if Ricardo Ratliffe has two fouls before the first TV timeout, and Steve Moore picks up a second before the third TV timeout ... and Kim English is forced to body up against Kyle O'Quinn ... ? NSU is going to pound and pound and pound, and if Mizzou's positioning isn't sound, they could find themselves limited by foul trouble. In some ways, NSU is like a mini-Kansas State -- they can throw waves of similarly-talented bodies at you, and they don't mind getting into foul trouble if it means you do too. ("The Whistles" goes for NSU, too, by the way. Against their five best opponents -- Marquette twice, Drexel, Virginia Tech and Illinois State -- O'Quinn fouled out three times.)

There is no reason to believe Missouri will tighten up or panic if things stay tight for a while. They haven't made a habit of it this season. But in theory, NSU is big and physical enough to hang around with the Tigers, and the imminent Mizzou run will only come if the Tigers continue to play their game and trust themselves. If NSU goes on a little run and we start to see quick Phil Pressey 3-pointers and out-of-control drives, however, there might be reason to get a little nervous. Run the offense, take good shots, play sound defense, win.

Mizzou absolutely played its game. And it wasn't good enough.

We never necessarily know which Mizzou guard is going to catch fire, but one usually does, be it Marcus Denmon, Mike Dixon or Kim English. What makes Mizzou untouchable at times is when somebody is on fire and Phil Pressey is in complete and total control. As I said multiple times, despite Kim English averaging 23 points per game in the Big 12 Tournament, I'd have thought long and hard about giving Pressey the tournament's Most Outstanding Player award. Quite simply, when he is great, Mizzou is great. So, uh, be great, Flip.

Flip Pressey was great. And it wasn't good enough.

Again, we've got a postmortem series on the way, but in the meantime all I can think to say is what I said in comments yesterday:

Duke's loss was certainly an indication that stupid s*** happens, and that the only way you can be assured of breaking through is by continuing to put a high-quality product on the court every year and hope that the breaks go your way. Just look at Kansas — Bucknell (2005), Bradley (2006), Northern Iowa (2010), VCU (2011) … oh yeah, and the 2008 national title. Or Duke in recent years — VCU (2007), Lehigh (2012) … and the 2010 national title. Obviously we tried the "consistently good teams" thing in previous decades and didn’t get a Final Four, but … it’s still the only way.

I know this loss set off the typical -- and somewhat justifiable -- round of "same old Mizzou" self-pity, but there are no curses preventing Missouri from finally breaking through and reaching a Final Four, BCS title game, etc. All it takes is continued effort. There is no question that Mizzou has suffered plenty of creatively gut-wrenching losses, but what else is there to do but keep trying to put great teams on the court and keep trying to break through?

Usage%: This "estimates the % of team possessions a player consumes while on the floor" (via). The usage of those possessions is determined via a formula using field goal and free throw attempts, offensive rebounds, assists and turnovers. The higher the number, the more prevalent a player is (good or bad) in a team's offensive outcome. As you would expect, someone like Kim English has a high Usage%, while Steve Moore has an extremely low one.