Back in February, Ken Pomeroy wrote a fascinating pair of posts (Part One, Part Two) that, honestly, I'm still trying to wrap my head around to some degree. Basically, Pomeroy established the simple fact that 3-point shooting is incredibly random, and that defenses have little control over the percentage of 3-balls an opponents makes. From the second post:

The defensive plot is just a random scattering of data, as has been discussed previously, but the offensive version isn’t much better. If you shot 45% in the first half of the 2011 conference season, you’d be expected to shoot about 35% in the second half. If you shot 25% in the first half, you’d be expected to shoot 33% in the second half. A difference you couldn’t notice with your eyes. I don’t know exactly what implications this has on strategy, but when evenly-matched teams get together, action happening beyond the 3-point line is like a lottery. You take a shot and a third of the time you have success.

Against Missouri, teams seemed to have no problem finding the willingness to "play the lottery." And at incredibly inopportune times, they hit it big. As I mentioned on Sunday, Mizzou's ranking when it came to 3PT% defense stuck out like a sore thumb. The Tigers' defense was 13th in FTA/FGA (the ability to avoid fouls), 20th in Steal%, 101st in Turnover% ... and 280th in 3PT%. In Mizzou's five losses, opponents made nearly 50 percent of their 3-pointers ... and against "real" teams, Mizzou allowed a 37% success rate on 3-balls even in wins. It is difficult to consider that random, especially considering that, when Zaire Taylor and J.T. Tiller were manning the perimeter, Mizzou ranked 16th (in 2008-09) and 58th (2009-10) in 3PT% defense. After Tiller and Taylor, both regarded as wonderful defenders, left, Mizzou has fallen to 164th and 280th. That cannot simply be random, right?

To make sense out of what ended up being Mizzou's fatal flaw (no matter how much it truly stemmed from a "flaw"), let's take stock of what we know.

1. The Difference Between Good And Bad 3-Point Shooting Is Minimal

It's worth pointing this out at the start. This past season, with Mizzou ranking 280th in 3PT% defense, opponents made 36.8 percent of their 3-pointers, good for 1.10 points per shot. In 2008-09, when Mizzou ranked 16th, opponents made 30.3 percent, or 0.91 per shot. That basically means that opponents made one extra bomb for every 15.4 3-pointers they attempted. That can absolutely make a difference in a close game, but it still adds perspective. The difference between good 3-point defense and bad is not quite as devastating as it feels when we are watching a team like Norfolk State kill Missouri with the long ball.

Along these same lines, when it comes to 3-pointers, one particularly crazy game can skew things a decent amount. If opponents made five fewer 3-pointers versus Missouri this year -- if a couple of stupid bank shots don't get in, if Scott Christopherson's 60-footer is off target, and if two other shots rim out, that makes the difference of almost a full percentage point. And if opponents make just 35.9% of their 3's instead of 36.8%, that makes a difference of 40 spots in the 3PT% defense rankings. Two percentage points makes a difference of over 100 spots.

2. There Was Almost No Correlation Between Who Was Good At Shooting 3-Pointers And Who Shot Well Versus Missouri

Call it morbid curiosity. I wanted to figure out if there was any connection between opponents' season averages in various 3PT-related categories and their performances versus Missouri. How much might Mizzou's poor 3PT% defense have stemmed from simply playing a lot of good-shooting teams? How often did opponents shoot higher or lower than their season averages?

3-Point Percentage: For the season, 21 of 35 opponents (60%) shot better than their season averages against Missouri, and 14 (40%) shot worse. Eight opponents shot at least 10% better, 13 shot less than 10% better, nine shot less than 10% worse, and five shot more than 10% worse. So basically, opponents experienced eight particularly good games and five particularly poor ones, 13 above average games and nine below average ones. Mizzou's percentages may have been skewed at least slightly by the fact that they played 14 games versus teams ranked in the Top 130 in terms of 3-Point Percentage, including No. 28 Baylor (three times), No. 49 SEMO, No. 54 Iowa State (twice) and No. 73 Mercer. (Then again, they also played ten games versus teams ranked 250th or worse.)

So was there a correlation between the teams that shot well and their season percentages? No. None whatsoever. 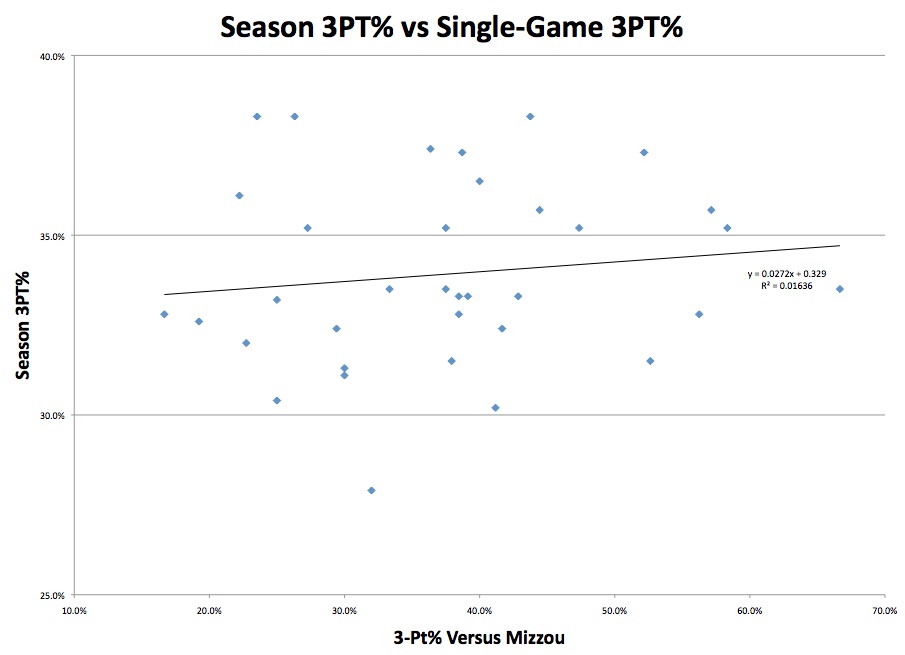 In all, more teams shot better than average against Missouri than worse ... but who's to say that this wouldn't have evened out over, say, an 82-game schedule? We can probably conclude that Missouri's perimeter defense was worse than average, but not nearly as bad as it felt in the outlier games.

I also wanted to see if teams shot more 3-pointers against Missouri than their season averages. Did it seem like opponents were making more 3's because they were taking more 3's? 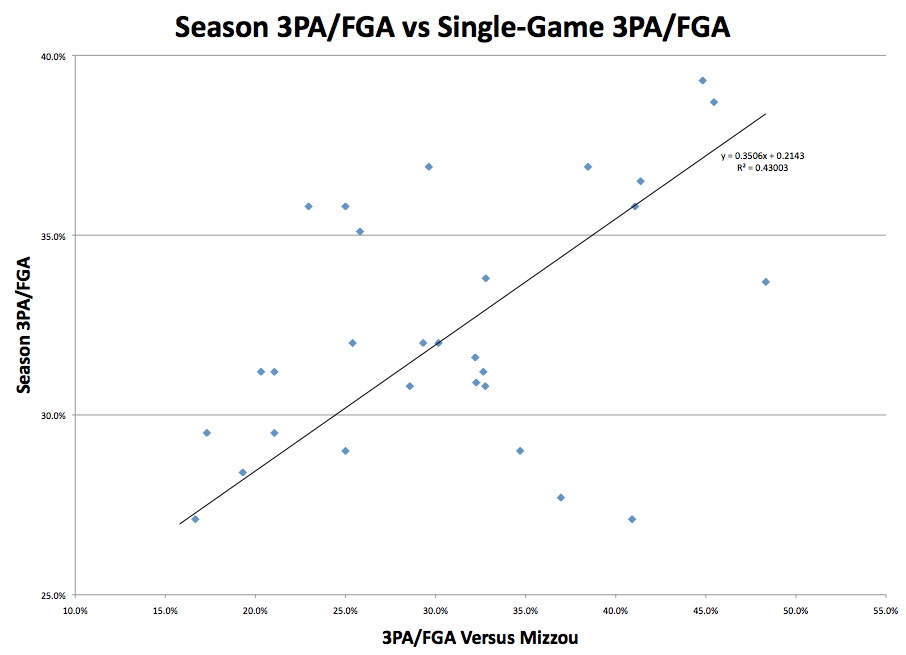 Over the course of 35 games, six opponents had a 3PA/FGA 10% lower than their season averages, two had a 3PA/FGA 10% higher than their season averages, and 27 were within 10%, one way or the other (12 higher, 15 lower). If anything, opponents were slightly more likely to shoot fewer 3-pointers. This could mean they were taking only higher-percentage 3-pointers (which resulted in a slightly higher-than-normal overall percentage) ... or it could just be a sample size issue again.

So far, this analysis isn't very satisfying, is it? Basically, opponents were slightly more likely to have an above-average shooting game from long range versus Missouri. But who succeeded and who didn't was almost completely random. Plus, opponents didn't really take more 3-pointers than normal either. In the end, we might be showing some selective memory here -- we remember the stupid-hot games (Norfolk State, Kansas State in Columbia, Oklahoma in Norman, Kansas in Lawrence) because of how damaging (or nearly damaging) the stupid-hot streaks were. But we ignore the fact that Mizzou beat teams like Baylor (twice), Texas (in Austin), California and Illinois, in part, because of how poorly those teams shot from 3-point range. Granted, the stupid-hot games were further away from team averages than the ice-cold games were, but only so much so.

Okay, so we still don't know how much of an impact Missouri's own defense had on opponents' 3-point shooting. What do we know?

Indisputable, right? J.T. Tiller and Zaire Taylor were 6-foot-3 and 6-foot-4, respectively. Mike DIxon and Phil Pressey are allegedly 6-foot-1 and 5-foot-10. Just thinking in terms of the space needed to launch a 3-pointer, or the impact of having a hand in your face, this alone might make enough of a difference for opponents to make one extra 3-pointer per 15.4 attempts.

The bad news: despite the fact that they are going to play even more minutes next season, Dixon and Pressey are going to continue to be short. As our own dcrockett17 mentioned the other day:

Missouri obviously could have been better defensively, but in truth NSU could always shoot over the top even when closely guarded. [...] I know that perimeter defense has been an issue all season, but as Greg Anthony said in studio, Haith can't coach guys to be taller. I'm honestly more upset about a few loose balls that NSU outhustled us for and a couple sloppy turnovers and bad shots than I am about the defense. The guards from NSU should have been taking uncontested perimeter shots. They hadn't proven that they could hit them consistently all season.

No, Dixon and Flip weren't the only defenders on the court for Missouri this year -- 6-foot-3 Marcus Denmon and 6-foot-2 Matt Pressey were, too. But Mizzou's backcourt was indeed shorter these past two seasons than it was when opponents were shooting poorly 2-3 years ago.

The good news: Flip and Dixon are good defenders in other ways.

More bad news: one of the ways in which they are good also might lead to some open 3-pointers.

It is difficult to ignore the simple fact that Mike Dixon was named to the Big 12's All-Defense team. Meanwhile, all Phil Pressey did was set Mizzou's single-season steals mark. Dixon gets underfoot, and Pressey goes for steals; it often flusters opponents (even when they aren't actually turning the ball over), and it obviously benefits Mizzou. At the same time, however, Pressey's risk-taking means he spends a good portion of a game chasing his opponent toward the basket. Kansas State's Angel Rodriguez absolutely devastated Missouri in this regard; with Mizzou down, Pressey began to take more risks, and Rodriguez was quick enough to consistently blow by Pressey, draw defense into the lane, and find an open 3-point shooter. For much of the Norfolk State game, we saw exactly the same thing.

We can debate how much Flip should or shouldn't employ this style, but one thing is probably certain: he's going to keep employing it. He could get better at it, but no matter what, he will continue to be a high-risk, high-reward defender. And as long as Mizzou's help defense is good, that's probably okay. Hey, speaking of which...

In 2009-10, Missouri's defense ranked 35th in blocks. In 2010-11, it ranked 36th. In 2011-12, the Tigers fell to 253rd in this category. There are probably a couple of reasons for this. First, Steve Moore, a decent shot blocker in previous years, blocked fewer shots this past season. Among other things, the desire to avoid fouls (since, as Ricardo Ratliffe's backup, he had no backup of his own and couldn't afford to commit two quick fouls) probably had a role to play in this. Sure, he still went for silly blocks sometimes (which drew him out of good rebounding position), but he was affixed to the ground a bit more this season.

One other reason Mizzou's shot-blocking faltered: this guy wasn't in uniform. 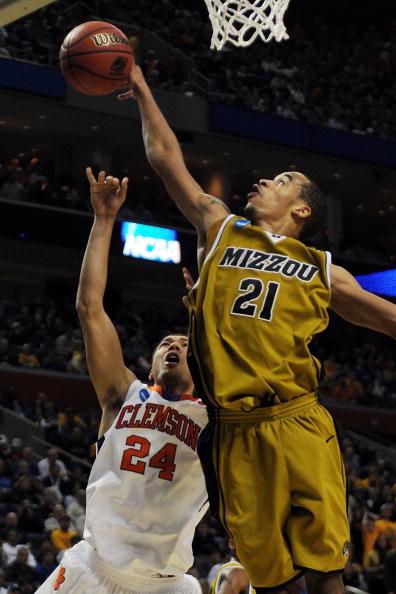 Laurence Bowers ranked 115th in the country in Block Rate in 2009-10, 76th in 2010-11. If his athleticism returns as it should following this year's knee injury, he should rather easily finish his career as Mizzou's second-best shot blocker of all-time behind Arthur Johnson. Hell, he's already in fourth place and just six blocks behind Doug Smith for third. (This despite barely playing as a freshman.)

Now, in theory, blocked shots and 3-pointers are almost entirely mutually exclusive. Most blocks come on 2-pointers near the basket. But I think the two are connected when it comes to overall team defense. With a healthy Bowers, not to mention a major upgrade in team size (not only will 6-foot-10 Ryan Rosburg, 6-foot-10 Stefan Jankovic and 6-foot-9 Danny Feldman be in uniform next year, but so will 6-foot-10 preferred walk-on Eric Moeller, as mentioned by PowerMizzou this morning), Mizzou should surge in terms of shot blocking next year. And if Mizzou defenders are capable of impacting shots as individuals, less sagging will be required from the guards. Less sagging means fewer open 3-pointers, in my head, at least. Throw in at least one incoming recruit (6-foot-3 Dominique Bull) with a reputation for strong, physical defense and, comparatively speaking, height, and it is reasonable to believe that Mizzou's overall team defense could improve by a decent margin in 2012-13.

Obviously this isn't a guarantee; still, Mizzou will have an all-conference defender, one of the nation's best ball thieves, Mizzou's second-best shot blocker of all-time, and a wealth of size coming off of the bench. That is a recipe for decent defense. Will it improve enough to compensate for probable regression on offense?