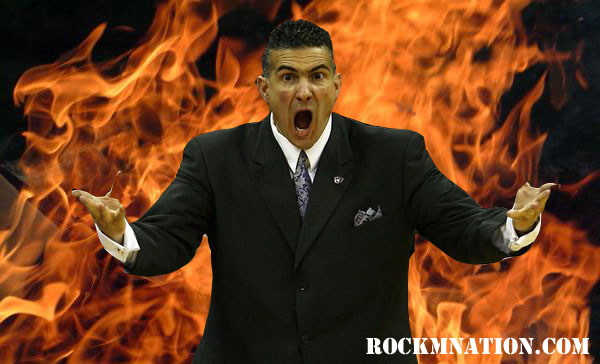 Guess who's following us to the SEC East...

For a long time, I've been downplaying two separate memes when it comes to Mizzou's move to the SEC: 1) "LOL Mizzou is going to go 3-9 every year," and 2) "Mizzou isn't going to have any fun in basketball because the SEC could care less about it." No. 2 just got more ridiculous with what appears to be the imminent hire of Frank Martin to coach South Carolina. The SEC East (which doesn't exist when it comes to division standings but still probably exists when it comes to scheduling) now features the following teams:

As was discussed last night in comments, we'll see how they end up drawing up the schedules. But Mizzou could be facing 12 games versus an SEC East that is far rougher than the Big 12 North ever was.

(All this said, MAN do I feel bad for K-State fans. Initial rumors are that KSU's AD did not take the Martin rumors seriously because he thought Martin was bluffing, a la Mike Anderson and the Georgia rumors a few years ago. Granted, I could see why he thought this might be a bluff -- you don't leave KSU for South Carolina unless either your relationship with your AD is incredibly toxic, or you haven't thought your decision through very well -- but ... he's an AD. Be prepared for everything imaginable. I do find it funny, though, that Mizzou fans were almost as disappointed with this news as South Carolina fans. I wanted nothing to do with Martin teams in the future, even if he doesn't build as talented a roster at S.C. Murderball is still murderball.)

MAN am I going to be pissed if the Mountain West and Conference USA got my hopes up for a 24-team, "ALL THE MID-MAJORS" conference and then let it die on the vine. You can't get my imagination running like this!