We rejoin our 2012 Walkthrough series with a position that may or may not really exist for Missouri in 2012.

For the last 15 years, the tight end position has told you everything you needed to know about the Missouri offense’s overall personality. In 1997, Jake Stueve was a devastating blocker, a sixth offensive lineman, who caught two passes for 19 yards all season; he left the actual receptions to "tight end" (i.e. slow wide receiver) Eddie Brooks.

In 2003, J.D. McCoy gutted out 21 catches for 190 yards for an explosive, but quite limited, offense. Against Middle Tennessee, with the Tigers desperately trying to avoid an upset, he made a one-handed, fourth-down snare of a bad Brad Smith pass and almost tore his knee up in the process.

In 2007, Martin Rucker and Chase Coffman plowed through and leaped over defenders as part of the toughest, most explosive, most ridiculously exciting Missouri offense of the past 30 years, if not ever.

In 2010, Michael Egnew camped out in whatever hole-in-the-zone he could find as part of a Missouri offense that was efficient enough to win 10 games but lacked in big-play ability.

In 2012, Missouri's "tight ends" will include 1) an actual tight end with almost as many career tackles (0.5) and blocked kicks (one) as receptions (two), 2) two true freshmen, neither of which weigh more than 220 pounds (or, to put it another way, neither of which weighs more than Dorial Green-Beckham), and 3) any number of wide receivers. Ergo, Missouri's 2012 offense will likely be long, lean and potentially very fast … and size, sheer girth, might be an issue at some point.

On the spring’s first depth chart (PDF), three scholarship players were listed: Eric Waters and two wide receivers, Jaleel Clark and Bud Sasser. Marcus Lucas, long assumed to be a possibility in the "Danario End" role, remained as an X-receiver, suggesting that perhaps Missouri’s starting tight end this fall could be the one and only Dorial Green-Beckham. Regardless, it is all semantics at this point. The tight end is the Y-receiver; sometimes he looks like a tight end, and sometimes he doesn’t. 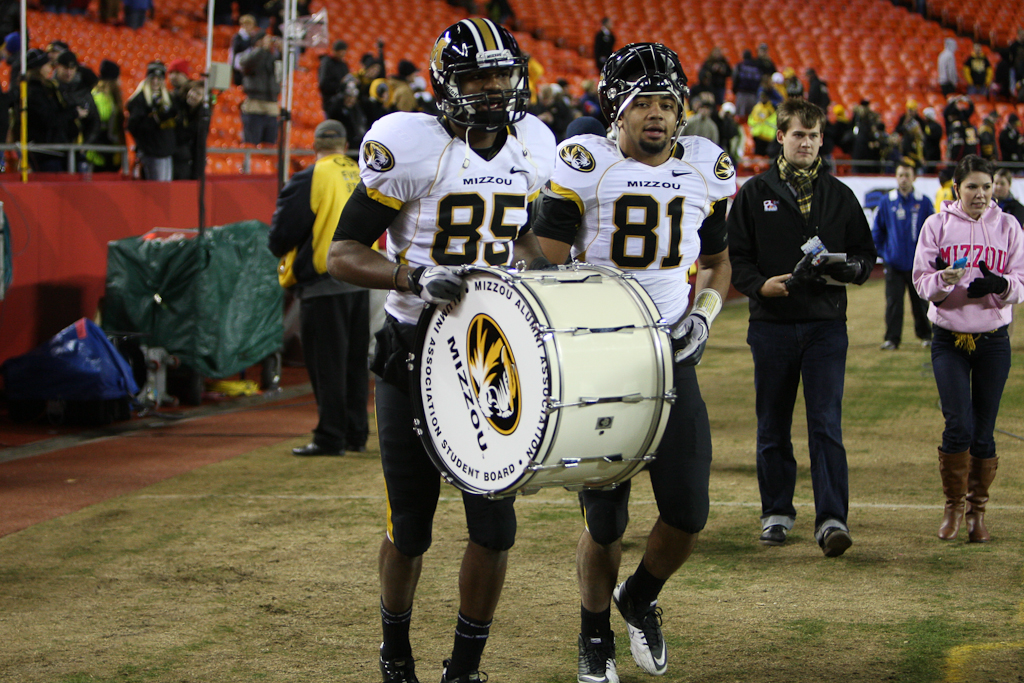 Bill C.: Eric Waters made one of the most unique first impressions imaginable on most Missouri fans last fall. The sophomore, who began to see playing time in blocking roles, caught a slant pass versus Texas A&M in College Station and, his defender having taken himself out of the play by going for the interception, turned and raced 42 yards for a first-quarter touchdown. But since he happens to wear No. 81, Danario Alexander’s number, the impression was partially "Hooray, we have a tight end after Michael Egnew leaves!" and partially "Um, is he really slow?" Like a red sports car seems like it’s moving fast even when it’s going 25 miles per hour, any Tiger wearing No. 81 should seem fast … right up until defenders almost catch him near the goal line. Waters probably has perfectly nice speed for a tight end, but his touchdown was an odd optical illusion for Missouri fans.

Waters was offered very early on in the Class of 2009 recruiting cycle, a sign that the staff liked him quite a bit. And while he will see quite a bit of action this fall, simply because 240 pounds in this offense is the equivalent of 285 pounds in others, it will be interesting to see just how much, and in which scenarios, he sees action. It has long been assumed that 2011 will see a return of the "Danario End," where a big, fast wide receiver lines up in the tight end’s spot in the formation. It certainly worked for that No. 81, though it might displace this one a decent amount. And then again, we may be severely underestimating his capabilities in assuming that the staff will need to populate the position with wideouts. Maybe Waters will suffice just fine.

The Beef: That catch and run against aTm was certainly exciting. What? That was just about the only catch on the season? Yikes. In the end, I am guessing he is going to be competing against Marcus Lucas for time at what we consider the "TE" spot, especially considering how relatively slim we are at the "TE" position.

RPT: Waters might have had his hands full enough with Sean Culkin coming in behind him. The fact that a wide receiver may replace the Y position makes them even fuller.

The Beef: I have spent time in Largo, FL and it is one of my favorite places in the US. If you are ever down there, you need to go to Crabby Bill’s (though that might officially be in Indian Rocks Beach). At any rate, I am excited about starting to make inroads in the state, and doubly excited to pull this young man in. Do I think he sees the field this year? Probably not, but he certainly seems to be blowing up and so maybe he lives up to that sooner rather than later.

Okay, time for actual analysis. This Largonian (?) was used in ways most 6-foot-5 receivers are in high school: line him up wide and throw the ball high in the air toward him. It is difficult to get a read for just how good players like Culkin will be once they are guarded by people as big and fast as him, but what you see on film is a guy with nice speed -- those are Florida defensive backs he is blazing through and by -- and solid body control on balls near the sideline. That's all you can ask for at this point. He looks like a strong college tight end. Now he has to prove it.

Bill C.: If you have an extra scholarship to give and are looking for a wild card, Brandon Holified is the perfect prospect on which to take a chance. Holifield is by all accounts a wonderful athlete -- he is a starting power forward on a very good prep basketball team, he has cleared 6-foot-11 on the high jump, etc. He is also VERY new to the game of football, having only played at a varsity level for one season. "Raw" likely does not begin to describe his skill set. Perhaps he is the next Jimmy Graham, and perhaps he will be a lifetime special teams performer. It is impossible to say.

Holifield's limited highlight film shows him on the receiving end of a lot of the same bubble screens he would see in the Missouri offense. He doesn't seem to have a problem going over the middle, and on the "throw it to the 6-foot-5 guy" lobs, he, too, shows solid ball skills. He is the biggest wild card in the class. Let's see what happens.