Missouri coaches have long professed that they choose the best five linemen, then fit then into positions. But while it would probably make more sense to write a post about the offensive line as a whole ... that would be a really long post. So we are splitting them up based on their current positions on the depth chart. Just keep in mind that the positions are fluid.

We struggle to figure out optimal ways to evaluate offensive linemen with stats. Sure, we've got the Adj. Line Yards and Adj. Sack Rate that I use in my stat pieces, but that in no ways boils things down to individuals. Nothing ever will, really, unless all teams start releasing their grades and percentages. That will never happen, of course. So we are left with, basically, all-conference honors and total career starts. The latter got an enormous boost when Elvis Fisher, he of 40 career starts, decided to rejoin the Missouri line. Instead of returning just 27 career starts following the departures of tackle Dan Hoch (39 starts) and guards Austin Wuebbels (39) and Jayson Palmgren (25), Missouri returns a healthy 67. Plus, they potentially have one of the better pairs of tackles in the SEC East. Not a bad way to start out a new life down south. 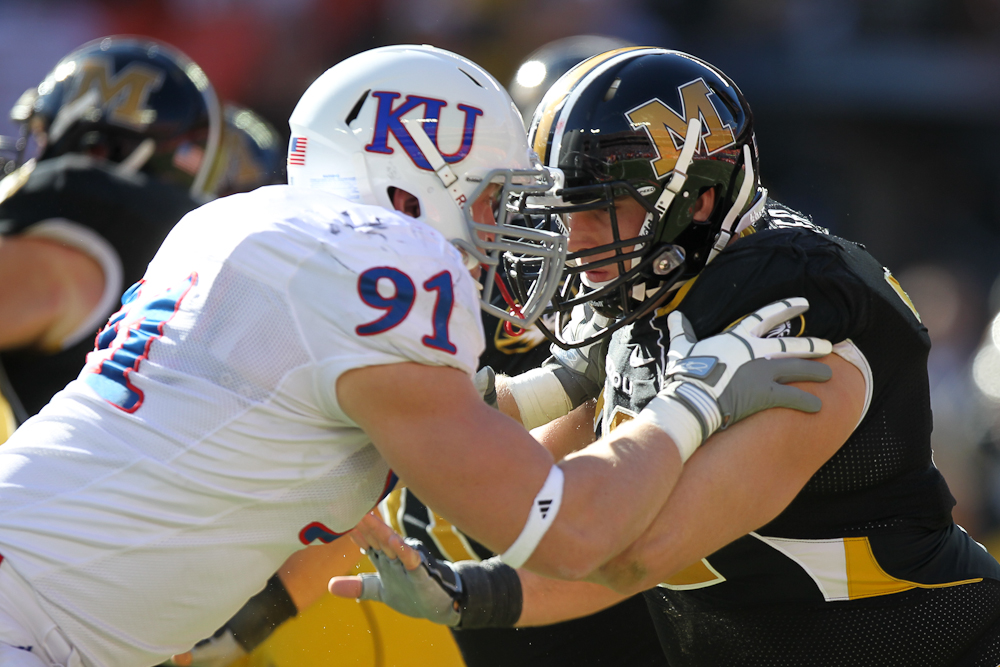 The Beef: Fisher’s return means Missouri will head into a new league with more experience on the line. That is going to be really important, and that is not a bad thing.

Bill C.: You want steady? Elvis Fisher is steady. He was tasked with the responsibility of protecting Chase Daniel’s blind side heading into Missouri’s most hyped season in a long time (2008), and he did it. He was tasked with protecting Mizzou’s first five-star, blue-chip, golden-boy quarterback, and he did it for all 27 games of Blaine Gabbert’s career. He is now tasked with not only putting a 2011 knee injury behind him, but also stabilizing a line that lost three starters honorable mention all-conference starters last year and protecting James Franklin from all the behemoths we have been told about on SEC defensive lines. Is there any point in doubting him?

When you envision good left tackles nowadays, you think of someone who is about 6-foot-7, 335 pounds, it seems. Elvis Fisher is not that. But he has used agility, footwork, brains and strength to carve out a nice career in Columbia, and thanks to both the NCAA’s decision to grant him a sixth year at Mizzou, and his decision to accept it, we get him for 12 to 14 more games. He has been at Mizzou since the start of the historic 2007 season; now, his career will finish with him ushering Missouri into the SEC. 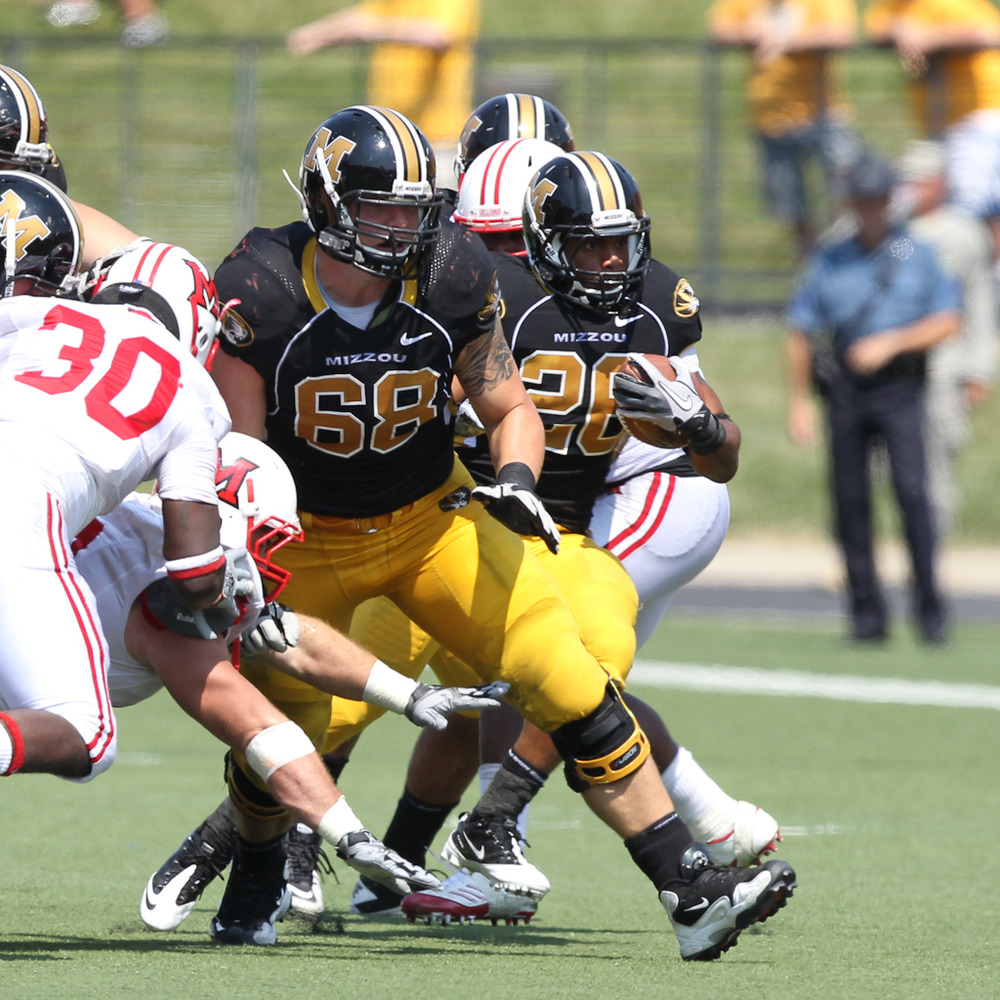 RPT: I will never say that losing an athlete of the caliber of Elvis Fisher is a blessing, but if there was a silver lining in Fisher’s absence in 2011, the accelerated development of Justin Britt is it. Britt found himself in a different position than many of his immediate predecessors in that A) Missouri had so much success running the ball, especially between the tackles, and B) the Big 12 was not as loaded with top-tier pass rushers as usual.

The Beef: What I loved about Britt when he came in was his wrestling background. To me, that means good hands and good feet, which are imperative for good linemen. The rest can be taught (technique) or added (size). Considering what the offense did this year, I have to believe the line was probably underrated for much of the season, especially with the injuries to Fisher and Ruth. I certainly expect Britt to be a big part of what we do for the next couple of years.

RPT: As Beef alluded, we loved his wrestling background and what it meant for his fluidity in space, but I don’t think we appreciated his power until the end of the season. Britt is a perfect example of perhaps the most underappreciated and under-discussed aspect of Mizzou’s Pinkel-era success: The identification and development of offensive linemen from within state borders.

Bill C.: For those inclined to enjoy some advanced statistics, I should point out that Missouri’s line ranked second in Adj. Line Yards and 71st in Adj. Sack Rate last year. That averages out to one of the better lines in the Big 12. That they accomplished that without Fisher is both a testament to a) departed guards Austin Wuebbels and Jayson Palmgren, whom we probably complained about a bit too much at times (Palmgren did occasionally have issues with penalties), and b) Britt, who stepped in for Fisher with short notice and did a tremendous job. 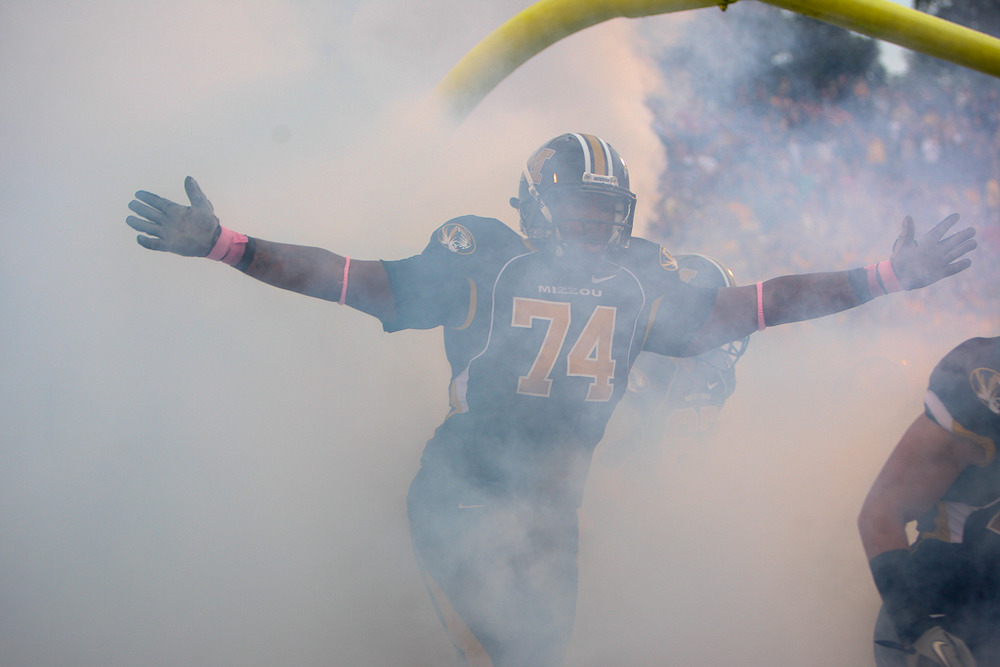 The Beef: I am guessing that Freeman is going to see pretty significant time this coming year. Hopefully his fitness and stamina level are where they need to be, and he has a big spring.

RPT: I can’t get over just how different Freeman is from the prototypical Missouri lineman of the last several years. Without the benefit of seeing him in extended action, it’s hard to know what to expect from this mammoth of a human being, especially as it pertains to his ability to move laterally.

Bill C.: Missouri coaches have often spoken of "good weight" and "bad weight" on offensive linemen, and how it sometimes takes a little while to strip a player of the latter and replace it with the former. The story goes that when Tyler Luellen came to Missouri as a four-star freshman in 2003, he was stripped down to about 245 pounds, then built back up to around 300. Never has the "good weight" versus "bad weight" story been more evident than with Freeman, an absolutely enormous human being who has "trimmed down" to about 325 pounds in anticipation of his junior season. He suffered an injury last fall, but if he is in game shape, he should absolutely be in this year’s rotation, especially if Anthony Gatti continues to miss time.

RPT: Gatti is starting to tread on Danario Alexander territory here. We continually hear about what a difference maker he could be and all of the physical ability he possesses. After a while, it started to become more sad than it was exciting. Fortune reversed itself long enough for Alexander to put together one historically great season for Mizzou. Gatti has much more time to turn it around and perform while fully healthy, but it all starts this offseason in seeing how the knees hold up.

The Beef: I am guessing that, when healthy, Gatti is going to compete to be the backup left tackle. Maybe he sees some time over at right tackle depending on his health and the depth we have, as well as considering the fact the coaching staff typically tries to "cross-train" as many of the linemen as possible to develop depth. But after two big injuries, I am certainly concerned about his ability to stay on the field.

Bill C.: Anthony Gatti passes the eyeball test. He actually looks bigger than 6’6, 295, but two years into his Mizzou career, that’s all we really know about him. He looks the part, and quite a few people have written or talked about how good he sometimes looks in practice. If healthy, he could potentially be a great lineman, but the clock is unfortunately ticking.

Bill C.: The most highly-touted of the four offensive linemen signed in the 2011 class, Chappell is currently riding on the second string behind Fisher. He was twice named all-state in Texas and allowed zero sacks in his junior and senior seasons, which … well, that’s pretty good. He was also named all-district in basketball, which suggests that his feet and athleticism are probably pretty good.

The Beef: Canadian, Texas....tee hee hee. Yeah, that is really all I have.

Bill C.: A bit of a sleeper in the 2011 class, Boddie got a jump on his classmates by enrolling a semester early. That didn’t help him earn playing time as a freshman, but it certainly can’t hurt that he is already going through his second set of spring practices. Boddie was good enough to play for Gilmer in the state championship game as a freshman. We’ll see if he can work his way into the rotation; he’ll probably have to beat out Chappell to get there.

Bill C.: Also: he listed "roping" as one of his hobbies on his Missouri recruiting profile. That’s fantastic.

Bill C.: Missouri’s 2012 commitment list underwent a lot of turnover through the recruiting process. A number of linemen, most (or all) of them from Texas, committed, then de-committed at random times throughout the year. The Tigers ended up signing two offensive linemen: Evan Boehm and Jordan Williams. Williams was listed as 250 pounds by Rivals, but he is evidently closer to 270 at this point. Not that this really matters -- he probably isn’t a candidate to play as a true freshman, so he has plenty of time to add the proper "good weight," even if he were 250. His skill set is a bit of a mystery, but it bears mentioning that he chose Missouri over offers Stanford, UCLA, Arizona, Arizona State, Colorado, Oregon St--basically, the entire Pac-12 and Boise State.

The Beef: Love that he is from Denton, TX, and I am guessing he will also take a year or two to fill out before we know where he might make a contribution.