I always say that you can get something out of the Black & Gold Game, but only if you figure out things to focus on beforehand. If you just sit back and watch, you will see Mizzou players making good plays (hooray!) against other Mizzou players (boo!), but if you identify some narratives and follow them, the afternoon will not be a complete wash. To review the Black & Gold game, then, I will identify a potential storyline that was worth watching for each unit, then discuss how it turned out. 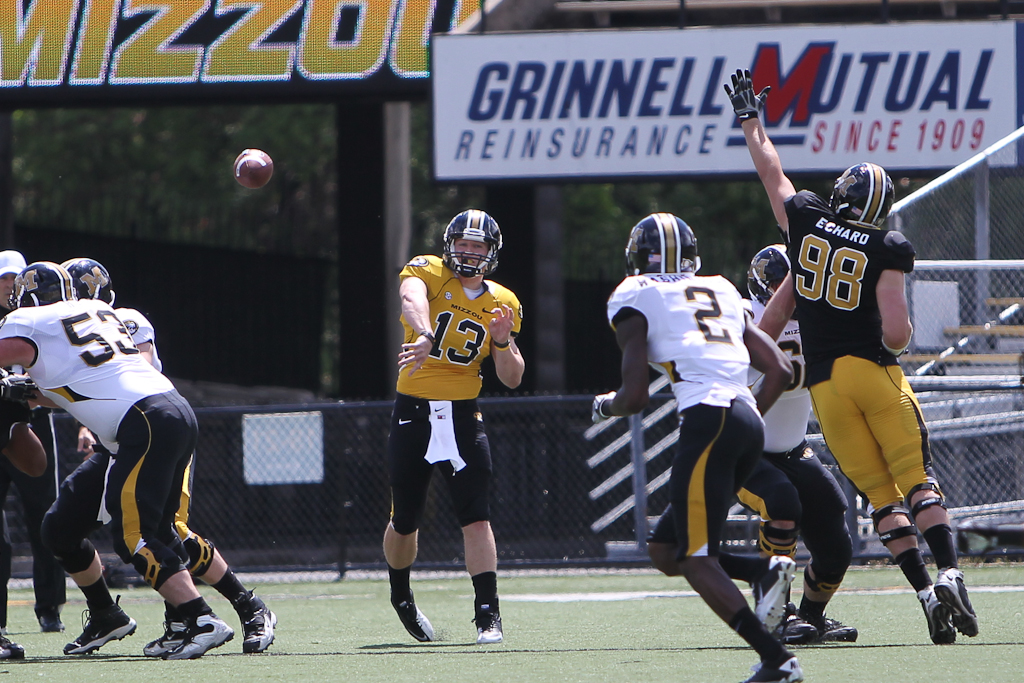 Storyline: Will Corbin Berkstresser look like a No. 1 quarterback?

As far as we know, James Franklin will be Missouri's starting quarterback this fall. But until we know that is the case, we technically don't know that is the case. (Lost Yogi Berra-isms.) This was Berkstresser's opportunity to prove that, in case something worse than expected was going on inside Franklin's shoulder, Missouri would still be in decent hands next fall. For the most part, he accomplished that. He completed 13 of 20 passes for 187 yards, a healthy 9.4 per pass. In the meantime, however, he also looked quite a bit like a redshirt freshman. He had the tendency to stare down options sometimes, and as we saw from today's photo gallery, he appeared to close his eyes in anticipation of hits sometimes. Not a good thing.

In all, Berkstresser played at around the same level that Franklin achieved last April. He does not appear to be the tough runner that Franklin is, but with just a flick of the wrist, he can put quite a bit of juice on the ball -- he does not have Blaine Gabbert's hand cannon, but his is certainly the strongest arm on the roster.

Meanwhile, we got quite a bit of affirmation that, if Berkstresser were thrust into service as a No. 1, Ashton Glaser would be just fine at No. 2. He has improved an incredible amount from last spring, facing down a decent first-string pass rush and still delivering quite a few nice passes. His stats (14-for-25, 213 yards, two touchdowns) were obviously padded by an 87-yarder to Jimmie Hunt, but he looked pretty damn good for much of the game.

MIZZOU has THE best fans in the nation. Thanks everyone!

By the way, we should take a moment to commend Glaser for his perseverance. As an out-of-stater entering his junior season and grounded on the depth chart, he is a prime transfer candidate. And for all we know, he will leave at the end of the semester. But he has shown no signs thus far, and he appears to love being a Missouri Tiger. You cannot have enough guys like that on the team. 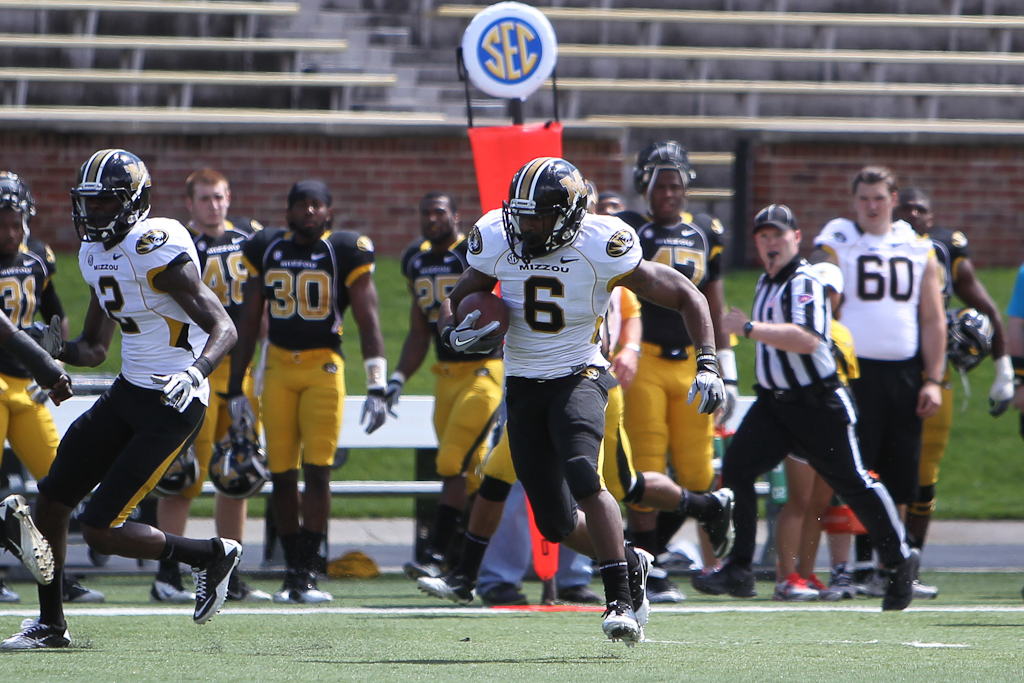 Storyline: Can Marcus Murphy assert himself before Morgan Steward and Russell Hansbrough get to town?

On the radio with SleepyFloyd7 last week, I proclaimed Marcus Murphy one of my two offensive players to watch during the B&G game. He had a lovely B&G game 12 months ago, and with his skill set he seems like, at worst, a lovely third-down option. At best, he seems to have similar upside to assumed starter Kendial Lawrence.

Murphy did not disappoint. Splitting time with the first and second string, he touched the ball 12 times on Saturday -- ten rushes, two receptions -- and gained a cool 113 yards. He has lovely vision, and it would behoove Mizzou to give him a few touches per game in the open field. Kendial Lawrence also looked strong, carrying six times for 69 yards. 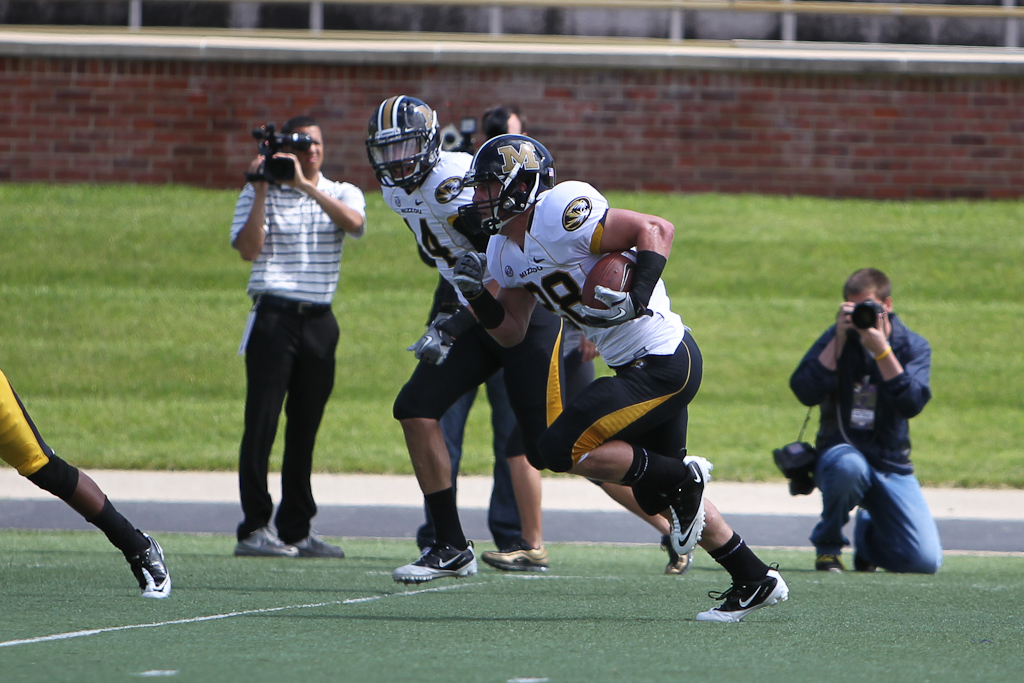 The other guy I mentioned with SleepyFloyd7 last week? Hunt. I was feeling pretty smart midway through the second quarter. Hunt caught three passes for 110 yards and the aforementioned 87-yard bomb; on the touchdown, he showed nice hands, extending to catch a high pass even though he knew Kenronte Walker was bearing down on him. Walker missed, and Hunt was left alone to sprint the final 50 yards or so for a score. The defense helped Hunt out, but he did everything he was supposed to do, both on that play and in the game as a whole.

I have zeroed in on Hunt as a key for 2012, simply because, if he begins to show the four-star potential he had coming out of high school, then Missouri quite possibly has the best receiving corps in the SEC. We know what we are getting from T.J. Moe at this point, and we know we will get some sporadic brilliance out of Marcus Lucas (four catches for 81 yards on Saturday) and L'Damian Washington. But if Hunt emerges, along with a red zone threat like Eric Waters or Bud Sasser and, of course, Dorial Green-Beckham, then that is a ridiculously deep unit of receivers. And that says nothing of Gahn McGaffie's improvement things spring. 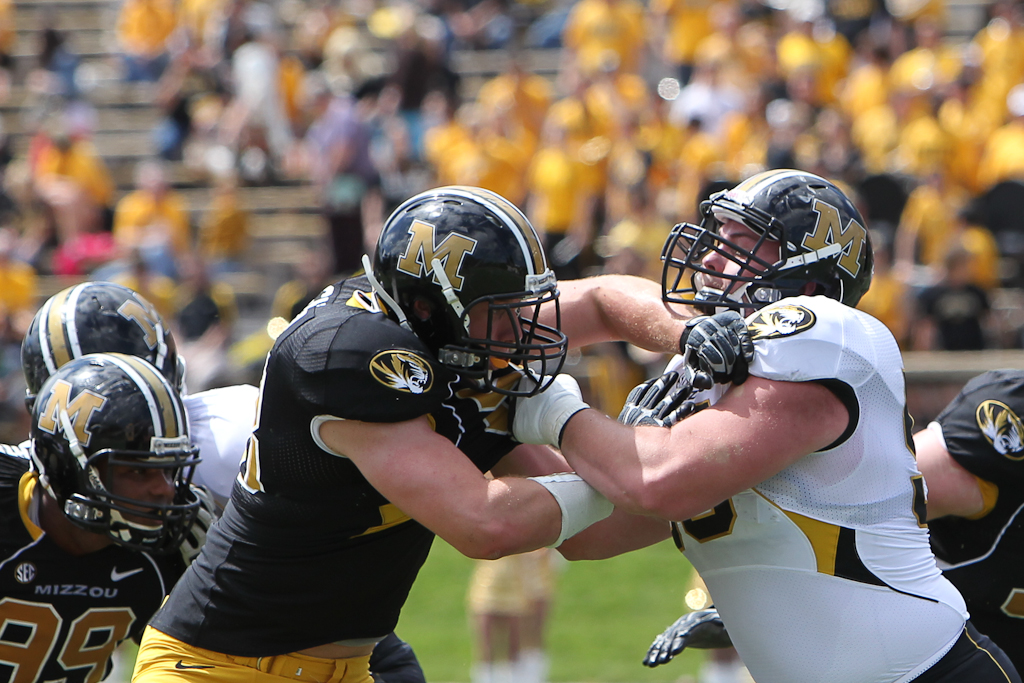 Storyline: Can Mitch Morse maintain his grasp on the starting center position?

In the Offensive Line Walkthrough piece, I said the following:

Morse has had as much of an opportunity this spring as anybody on the team not named Corbin Berkstresser. As mentioned above, the staff shifted Travis Ruth to guard to get Morse some reps at center. While the assumption is that he will end up Ruth’s backup at the position, one has to figure he would still have a chance to start if he finishes spring very well. At the very least, he would give the coaches their favorite type of problem, the "which of these two quality candidates should start?" problem.

Morse won the "Most Improved Lineman of the Spring" award at halftime, and he seemingly placed every snap on target. To the extent that Corbin Berkstresser faced any pressure, it came from Shane Ray on the outside. In all, I saw nothing to dissuade me from the notion that Morse may start at center, Ruth at guard, this fall. Morse's emergence is fantastic, not only in that gives Missouri two proven centers in case Ruth gets hurt again, but also in that it solves two problems at once. Entering spring, we weren't sure who would win the starting guard slot opposite Jack Meiners. If Morse stays at center, that allows Ruth to fill that void. 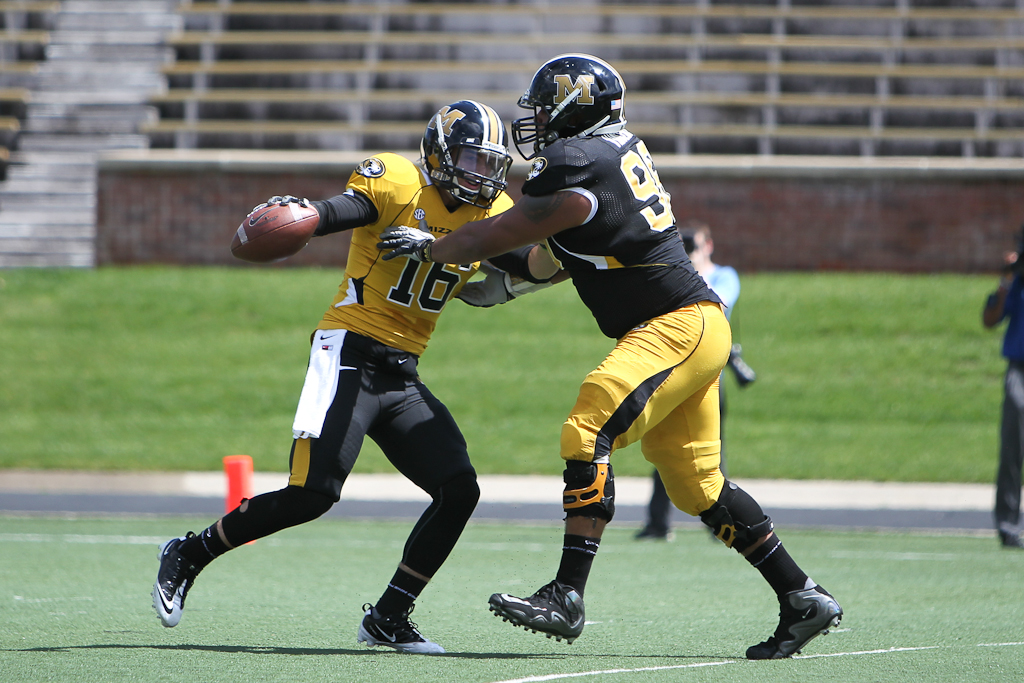 Storyline: How does Lucas Vincent look?

We've heard stories about Shane Ray all spring, and he certainly looked good on Saturday. We know at this point that Missouri's ends -- Brad Madison, Kony Ealy, Michael Sam, Ray -- are going to be active and rather effective. But tackle is still a question mark. Depth will be certainly be an issue no matter what, but Vincent looking good would assure Missouri of a stellar pair of starters in Vincent and Sheldon Richardson. Well, I had no complaints. He got in Glaser's face a couple of times, and most of the second string's success came on the edges and downfield. Vincent looked as good as I could hope. So did Ray (four solo tackles, one sack) and Ealy (one solo tackle, one forced fumble). 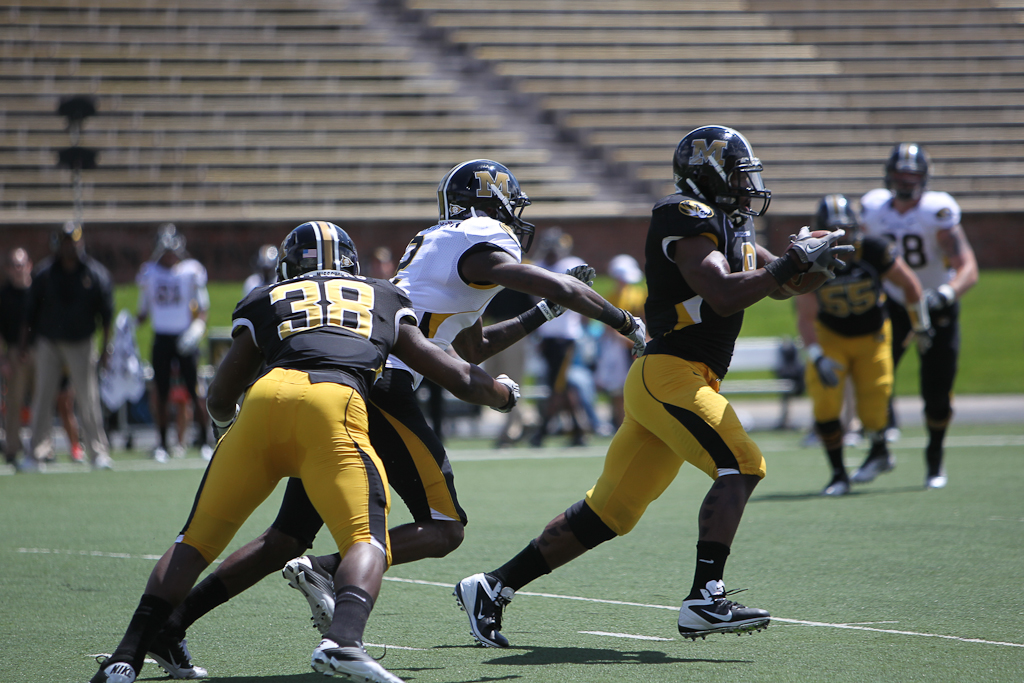 Storyline: Is the depth all we hoped it would be?

Yes. Yes, yes, yes. A thousand times yes. Hell, the second string looked better than the first string. Donovan Bonner read Berkstresser's eyes and scored a pick six early in the game, Kentrell Brothers looked fantastic in pass coverage, and Darvin Ruise was the hardest hitter on the field. We basically know what we are getting from the presumptive starters -- Zaviar Gooden, Andrew Wilson and Will Ebner -- but we also now know that, should injuries occur (and with Missouri linebackers, they always do), there shouldn't be much of a dropoff. I was almost as excited by the linebackers as I was terrified by the safeties. 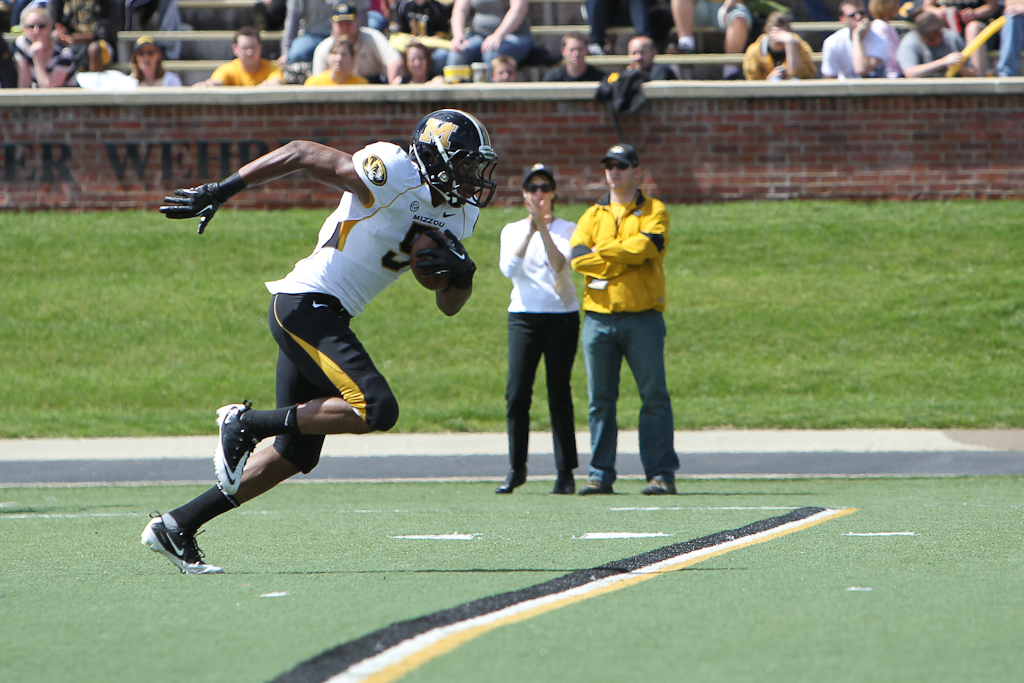 Someone probably should have been covering Mr. Woodland...

Storyline: Who stands out at safety?

A lot of players, but for all the wrong reasons. Braylon Webb broke up at least one pass that I remember, and Matt White (one solo tackle, two assists) looked decent in terms of gang tackling. But Walker was the reason for Hunt's 87-yard touchdown, and somebody -- no idea who, as nobody was within about 20 yards of him -- left Rolandis Woodland ridiculously open for a 35-yard touchdown in the second quarter. Glaser spotted Woodland and fired, and Woodland was able to walk about 20 yards for the score.

It is only April, and by all accounts Walker in particular was having a lovely spring. So I am not going to overreact to what truly was a wretched Saturday for the safeties, especially since a) Mizzou's corners are still very good, and b) I have an irrational level of hope in Holt. But let's just say that if Missouri's defense ends up having a fatal flaw, I have a good idea what it will be.

(And yes, this is the "One Enormous, Paralyzing Fear" referenced in the title of the post.)

Storyline: Is Trey Barrow really struggling as much as we've heard?

Due to some prolonged struggles this spring, Barrow recently lost his starting place-kicker job to Andrew Baggett, raising fears of more kicking troubles this fall. On Saturday, Baggett went 1-for-2 on field goals (made a 47-yarder, missed a 38-yarder), Barrow went 1-for-1 (dinged in a 21-yarder), and somebody -- Baggett, I think -- missed a PAT. I seem to recall both Jeff Wolfert and Grant Ressell struggling in previous springs, so I won't consider this a major worry until August ... but whatever leftover worries I had after last fall were certainly not assuaged.

Meanwhile, both Barrow and Christian Brinser looked fine in the punting department (Barrow countered one iffy punt with a 70-yarder that checked up at the 5), and thanks in part to the fact that they are now taking place from the 35 instead of the 30, every kickoff was a touchback.

(The "Touchbacks go to the 25" rule is really going to annoy me.)