Missouri is lucky enough in 2012 that they don’t have many mystery spots in the lineups, positions where there are a lot of candidates and alternatives but no true no-brainer solution. The interior of the offensive line, however, qualifies as such a mystery. Mizzou must replace two multi-year starting guards in Austin Wuebbels and Jayson Palmgren, but while there are quite a few interesting candidates, including two with starting experience, the race could go in any number of directions. 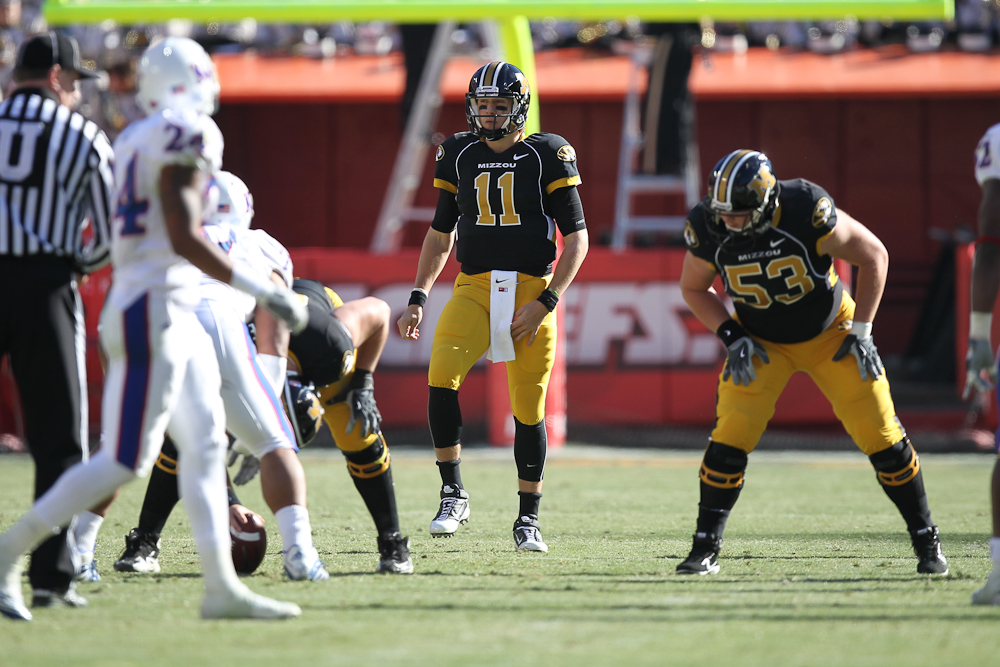 The Beef: Tough season for Ruth, who was expected to be the center for the entire season before injuries slowed him down. Here’s hoping his senior season goes a lot smoother. Here is also where Bill C. probably had some sort of breakdown of our stats with how our offense was when Ruth was in there versus Palmgren. And if not, then just look them up yourselves....you rely on Bill C. for too much anyway at this point.

RPT: With how much experience it seems like Ruth has for whatever reason, it’s easy to forget just how few games he’s started. Instability at center isn’t exactly something with which Missouri fans have become acquainted since the turn of the century. Here’s to hoping Ruth is healthy enough to stop the revolving door that existed over the ball in 2011.

Bill C.: If he even plays center, that is. The first depth chart of the spring listed him at left guard while Mitch Morse occupied the center role. Ruth could very well shift back in the fall, but with so many injuries on the line, the thought of getting more than one player major snaps at center probably isn’t a bad idea.

So let’s look at Ruth’s performance in a couple of different ways. First of all, here are the per-game Adj. Points averages*for each Missouri lineman (and the games they started) last year:

This tells us that Missouri’s line was at its best in the games Ruth started (i.e. the final seven games of the season). Now let’s look at a more direct comparison:

Ruth’s addition to the lineup, which moved Palmgren to guard, added about 2.5 points to Missouri’s ledger. He seemed to provide a much more easily catchable snap, and he proved himself both reliable and valuable. That’s good enough for me. Missouri’s line is better when Ruth is healthy, so … stay healthy, Travis!

* Why Adj. Points? Because it adjusts for both opponents and, in a roundabout way, luck. For more, start here. 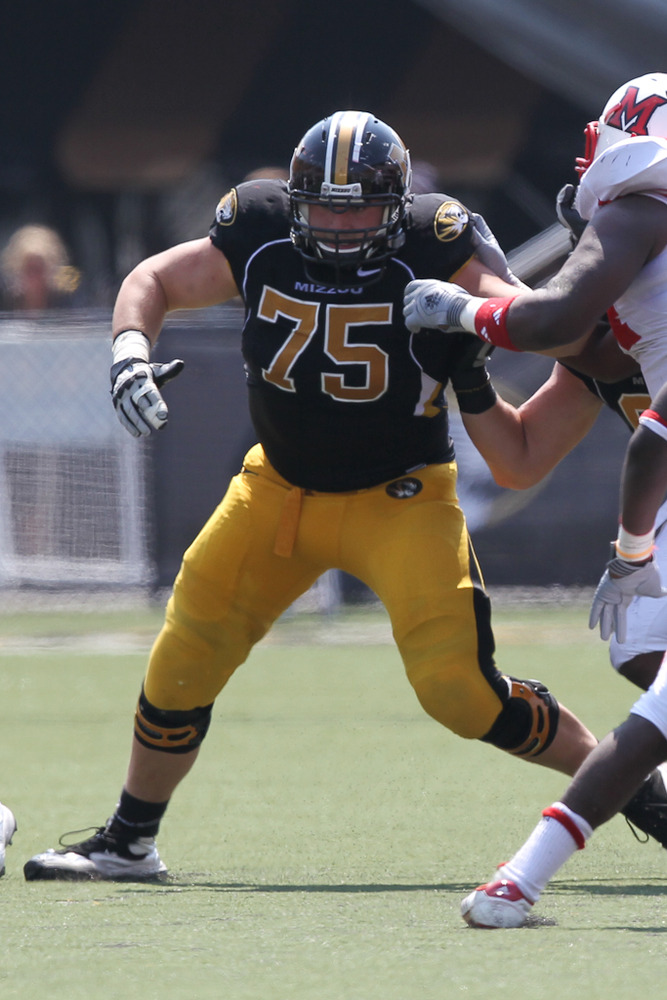 The Beef: Boy howdy is Meiners a big left guard to have. I am surprised he is already a senior. I think I would have said he was going to be a junior this coming year.

Bill C.: Jack Meiners is why "returning career starts" has limitations as a measure of quality. The coaching staff thought enough of him to play him as a true freshman, and he has been a role player on the line for each of the past two seasons. But he was still behind both Palmgren and Wuebbels on the depth chart and only saw starts last year because of injuries. Still, I trust him quite a bit, as a senior, to replicate the work of the two departed guards.

RPT: I know that the EA Sports dynasty crowd is baffled when almost every freshman non-starter isn’t redshirted, but in most instances, I stand firmly in the "if they’re good enough to earn their way onto the field, let them play" camp. The role of the freshman is in constant evolution in college football these days, but if there’s one non-redshirt Missouri fans may look back upon with a tinge of sadness when using the benefit of hindsight, it may be Meiners. If Big Jack has a tremendous senior season, it may end up being all worth it, or it may end up being a sad reminder of what could have been for 2012. Meiners will be one of most overlooked cogs in Missouri’s offensive success in 2012, as the conference change is going to place added pressure on the team’s interior line. If Meiners hold his own or even wins his interior battles, Missouri’s ceiling jumps considerably.

Bill C.: Morse has had as much of an opportunity this spring as anybody on the team not named Corbin Berkstresser. As mentioned above, the staff shifted Travis Ruth to guard to get Morse some reps at center. While the assumption is that he will end up Ruth’s backup at the position, one has to figure he would still have a chance to start if he finishes spring very well. At the very least, he would give the coaches their favorite type of problem, the "which of these two quality candidates should start?" problem.

Morse’s story is one of my favorites on the team -- an epic growth spurt converted him from iffy high school quarterback to wonderfully athletic offensive lineman. His success would mean another "successful Texas diamond in the rough" feather in the staff’s collective cap.

The Beef: I imagine he will see quite a bit more time in 2011 as he likely prepares for a two-year run as a our front-line quarterback.

RPT: Did I hear about Morse struggling to adapt to playing center, or is that just a figment of my imagination?

Bill C.: I think that was a figment of your imagination.

The Beef: This young man came in very highly acclaimed, but has yet to really get it figured out. I happened to see him at a high school game when he was a sophomore, and I could tell you he had a full beard then, so the kid is a monster. Does he compete for the starting spot at right guard or does he fall in potentially behind Meiners on the left side?

Bill C.: A former four-star recruit, Demien has not yet distinguished himself. But he is near the top of the "If he suddenly begins to reach his assumed potential, then wow, could Missouri be a great team" list, along with Kony Ealy and Jimmie Hunt. He looks the part, and there is a potential starting spot available if he happens to pull off a surge.

The Beef: On the last 2011 depth chart, Hill is shown as the backup right guard. I don’t get the sense he played too much this past year, but with the graduation of Wuebbels, it does seem like he could become a starter next year. He will certainly be a name to keep an eye on over the winter and spring.

Bill C.: ...if he can actually get healthy for once.

RPT: I’m pretty sure Mark Hill has been at Missouri since Larry Smith’s tenure.

(And yes, he’s out with injury this spring.)

The Beef: Since he is shorter, does he probably play more towards the interior of the line? Is he perhaps the back-up to Morse?

Bill C.: According to the spring depth chart, yes. A Class 5A all-state guard, McNulty has spent a little bit of time at both guard and center thus far, and he will likely be a candidate for playing time at either spot if it presents itself. Based on loose evidence (previous depth charts, recruiting rankings), I envision him as a step behind Morse, Demien and, when (if) healthy, Hill; but he is not so far behind that he cannot work his way into the rotation.

The Beef: I suppose I wonder if McGovern becomes the new Wuebbels solely from the standpoint of weight room milestones, since I believe he was some sort of award-winning weight lifter before getting to campus.

Bill C.: All I know is, I would very much enjoy it if he succeeded, simply because of the "We own North Dakota!" meme we could create. Unfortunately, he, too, is on the Injured List this spring, along with Hill and Anthony Gatti.

The Beef: Does Evan Boehm have a chance at playing, or even starting next year? I really don’t know, but the fact he is coming in when the right guard position is at its thinnest is certainly not a bad thing for him.

Bill C.: It is never a good idea to assume playing time for an incoming freshman, especially an offensive lineman. But it is difficult to doubt Boehm at this point, both because of his recruiting ranking -- he was easily the second-most highly touted player in Missouri’s 2012 class after some guy from Springfield (yes, Demien ranked highly, too, but every case is different) -- and the fact that Missouri could potentially use another warm body at his position, especially if McGovern or McNulty are not yet ready to be trusted. He will have an opportunity to work his way into the rotation from the beginning.