Missouri enters its first SEC campaign with a former five-star recruit at what is perhaps the most important position on the defense. That is a very good thing, even if he is injured this spring. The problem is, almost no players behind Sheldon Richardson are very proven. And Richardson isn’t even that proven himself. There is upside and reason for optimism on the projected first string. But if someone gets hurt? Is there enough (any) depth for Missouri's defense to survive without a drop-off? 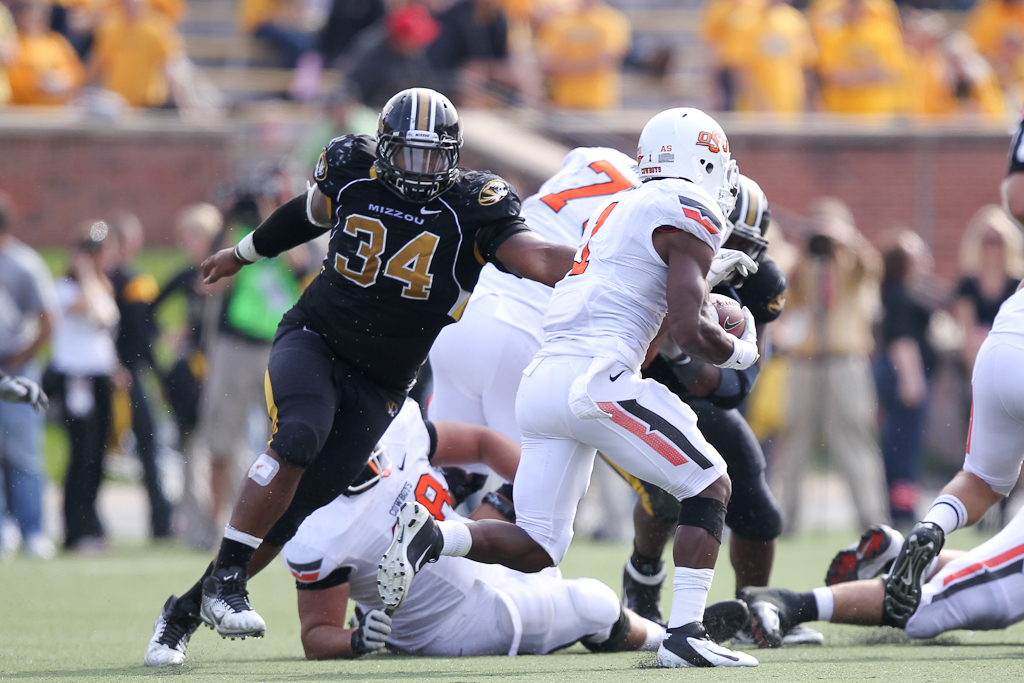 Bill C.: The most highly-touted defensive recruit to ever play for Mizzou, Richardson gave glimpses of greatness in 2011. As one would expect in his first year of Division I play (following to at junior college), Richardson took a while to get rolling, but he was a bit of a wrecking ball over the last half of the season. In his first five games, Richardson had just 6.5 tackles, 2.0 for loss. In his last seven games, he had 19.5 tackles, 6.0 for loss. He started making everyday plays as well as those behind the line of scrimmage.

By the end of the season, we were complaining about interior linemen holding Richardson with no call on virtually every pass. He was becoming a load, and it is unfortunate that he is missing spring football with injury. It wouldn’t have helped that much in his development -- by your senior season, you basically are what you are -- but considering how little experience he actually has, it wouldn’t have hurt.

With the departures of Dominique Hamilton and Terrell Resonno, Richardson is the now The Man at tackle. If he starts to deliver on his ridiculous promise and potential, Missouri’s entire defense could be transformed. There is nothing more powerful on a defense than a destructive defensive tackle. Show us what you have, Sheldon.

The Beef: One more year in the system really should do wonders for whatever future Sheldon Richardson perhaps hopes for in the NFL. A full year in the system, a full year in the workout program. (Ed. Note: This was written before it was announced that Richardson would miss spring football with an injury.) I think Richardson started to come into his own as the season went on, but I did wonder about his stamina and endurance at times. With big Dom and Terrell on the line, Richardson could be moved on and off. Without them, he will need to be the man who stays on the field as much as possible in each game.

RPT: It seems like Big Sheldon has always loved the spotlight of the big stage, which means that he’s going to love 2012. He is THE guy in Missouri’s interior line going into THE conference to make a name for himself as he dreams of playing at the next level. His physical skills are well-documented and overanalyzed at this point. I’m curious to see if he’s mentally tough enough to withstand the pressure of being an every down impact player at a position of questionable depth.

The Beef: I have said to Bill C. before, and I believe I said it when talking about Justin Britt, but I will always love to have a wrestler on the football team. A heavyweight wrestler (if they are any good, and Vincent was) should have great hands and great feet. I think Vincent has grown nicely (since he would have been under 275 after his senior year of football to wrestle) and I do believe he is my pick to line up next to Richardson come opening day.

RPT: Hard to believe Vincent is only a sophomore. RMN has had high hopes for Lucas Vincent since the day he stepped on campus, and Beef mentioned many of the reasons why. If Vincent wins the other interior line spot, it’s exciting. If he doesn’t command that role, it’s very, VERY troubling, especially if Marcus Lattimore shows up at even 80 percent in The Other Columbia™ in late September.

Bill C.: With Richardson out, practice reports suggest that Vincent has easily been Missouri’s best defensive tackle this spring. He is beginning to put one early postseason question -- Who starts alongside Richardson? -- to bed. Now he just needs to stay healthy so we don’t find out just how much distance there is between the starters and the backups.

Bill C.: Both Jimmy Burge and the man below him on this list, Marvin Foster, were forced into action when Dominique Hamilton got hurt in 2010. That they didn’t see as much work in 2011 was a positive sign -- it meant the players above them stayed healthy. The same will remain for 2012; if Burge sees the field in a more prevalent role, that means something negative happened from an injuries perspective.

The Beef: I think Burge has performed well at times, but I would be a little concerned if he is going to be a focal point for trying to stop the run.

RPT: Burge’s career has proven him to be a serviceable No. 3. If Missouri is in a position to require more of him, yikes.

Bill C.: Few players in the 2009 recruiting class excited RPT and me more than Marvin Foster, a squatty three-star tackle with seemingly a world of potential. Unfortunately, he cannot stay healthy to save his life. He missed 2009 with injury, he got dinged up in 2010, and he is currently missing Spring 2012 on the training table again. It is impossible to know how close we were to being correct about his potential, as he hasn’t been 100 percent long enough to test our theory. At this point, there is little reason to believe we will ever find out.

The Beef: If we were to attempt to distinguish between NT and DT on the depth chart, Foster was actually the third string DT, leaving us thin as hell at the NT spot (White below is the 4th string DT, as the three other NT’s all graduated). At any rate, I know Bill C. still holds out hope for Foster, and I am sure there will be a point during the off season when we hear what kind of beast Foster is. I hope it is true, because we appear to need all the help we can get going into next season.

RPT: Oh, what might have been. I just want a full calendar year in which he spends more time with Craig Kuligowski than Rex Sharp.

The Beef: Shut the front door...George White still has eligibility? I just do not see how that is possible. Oh well, I will clap loudly for you, George, on Sr. Day.

Bill C.: How long has George White been associated with the Missouri football program? He was originally part of the 2007 recruiting class (along with Elvis Fisher) and had already spent a year at prep school when he was in Marquis Booker’s car on an unfortunate night in March 2008. And yes, I, too, will clap loudly for 30-year old George White.

Bill C.: Two years ago, Matt Hoch, brother of former left tackle Dan, signed with Missouri as a 230-pound tight end. This spring, he is running on the second string as a 290-pound tackle. With Missouri desperately in need of depth here, Hoch’s Lorenzo Williams impersonation is more than welcome.

RPT: A prominent member of the notorious "Players Without Positions" list that Bill and I seem to create each year, has Matt Hoch found himself a position? Early returns seem to indicate in the affirmative, and that is an exciting proposition, especially since he’s found a spot at a position at which Missouri is woefully unproven.

The Beef: Last fall, rumors asserting that Hoch was out-growing the DE position and eyeing a move to the inside began to emerge. Considering his high school pedigree of having been an offensive player, seeing a guy effectively put on weight and not lose much on the mobility side is always a plus. If he is headed to the DT position, I don’t think that is a terrible thing.

Bill C.: Evan Winston committed to Missouri in July 2011 as a 240-pound defensive end. Thirty pounds later, he will report to Columbia as a tackle. He likely still has some growing to do, and it is probably a bit much to ask for him to become a contributor this fall, but with Missouri’s rather positive history of putting "good weight" on ends or linebackers and making them tackles, there’s no reason to expect that Winston WON’T become a contributor in a couple of years.

The Beef: Michigan is a very solid state when it comes to recruiting, and so while I thought it was interesting we ended up in on and getting this young man considering our move south, I am certainly happy to see it. Looks like a solid potential frame, but I will never expect a true frosh will see time on the field.

Bill C.: When the recruiting hype was growing for Sheldon Richardson a few years ago, many made a big deal about the fact that he was athletic enough to return kicks at the high school level. So was Harold Brantley, evidently. The coaches were quick to gush about Brantley, a late find in the recruiting process, and his film shows us why. He was not given a high recruiting ranking, but his film shows us somebody with a quick jump, speed and strength ... at least, at the high school level. He is an exciting prospect, both because of his serious diamond-in-the-rough potential and his film.