The Rafters, Class of 2012: Melvin Booker

Share All sharing options for: The Rafters, Class of 2012: Melvin Booker

Fittingly, the Rafters Class of 2012 is a four-guard lineup. Here's your point guard. 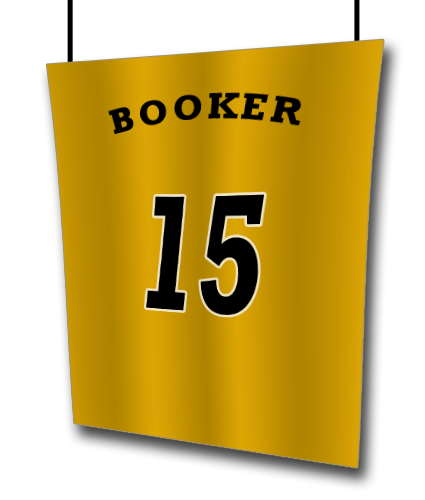 The first time I ever saw Missouri play in person, I left with two favorite players: Mark Atkins, whose seven no-conscience 3-pointers staked Missouri to a 104-94 win at Oklahoma on February 5, 1994, and Melvin Booker, who smoothly guided the ship in the most hostile of environments. He both scored 18 points and took a backseat to hot teammates like Atkins, Jevon Crudup (25 points, 15 rebounds) and Paul O'Liney (20 points).

At that point in the season, Missouri was still a bit of a question mark. They had not lost in quite a while, but they were ranked just 20th in the country, and they were not yet halfway through their undefeated run through the Big 8. I wasn't entirely sure what to expect from them, but they blew me away with their confidence, their explosiveness, and their cool under pressure. Tied at 89-89 with just over two minutes left, Mizzou went on a 13-0 run, sparked by an Atkins 3 and some Booker free throws.

In many ways, Booker's storied career as a Tiger mirrored two other recent Mizzou greats: Marcus Denmon ... and Brad Smith. Like Denmon, Booker let the game come to him, absorbed every lesson he learned, and turned into an incredible leader over his final two seasons. Like Smith, his impact-to-fanfare ratio was incredible. At a time when Mizzou was bringing in blue-chippers like Doug Smith and Anthony Peeler, Booker, who would almost certainly have been a two-star recruit had Rivals existed in 1990, allowed Mizzou to thrive when both stars (and others) had left. The photo above is one of the most famous in Missouri's basketball history, and there is no more deserving a star than Booker to have been in it.