Mizzou Moves To The SEC: Auburn Football, From Sullivan To Beasley To Cam

Share All sharing options for: Mizzou Moves To The SEC: Auburn Football, From Sullivan To Beasley To Cam

We began SEC Week(s) with the defending national champions. It's only fair, then, that we next head 160 miles southeast to the 2010 champions. Let Auburn Week begin! 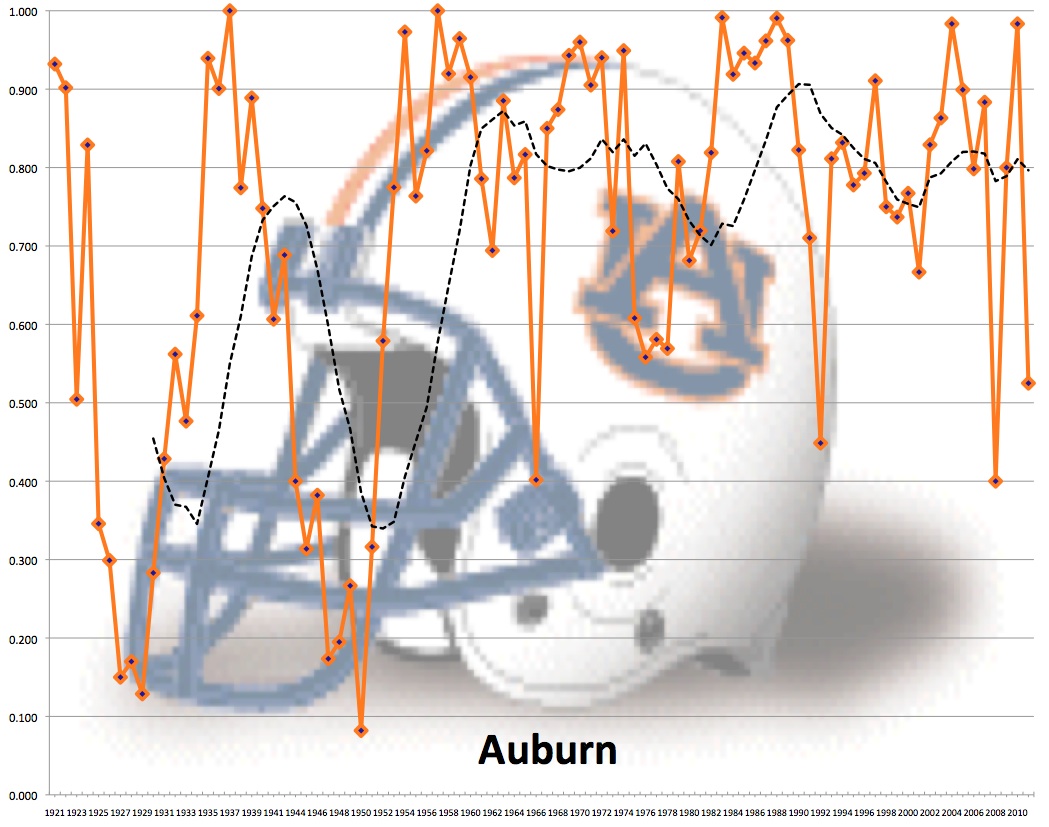 Auburn's Percentile Performance Since 1921 (according to S&P+ and Est. S&P+).
The dotted black line is the school's ten-year average.
For more on Est. S&P+, start here.
(Original helmet photo via NationalChamps.net)

Auburn has spent most of the last 50 years as a Top 25-caliber program. There have been droughts -- the mid-1960s were not particularly kind, the Doug Barfield era (1976-80) was mostly mediocre, and the Tigers went 8-14 in 1998-99 -- but AU has been consistently solid. Of course, "solid" doesn't necessarily cut it in the state of Alabama. Much of Auburn's history has been spent chasing Alabama's shadow, but the program that produced Bo Jackson and Cam Newton has had its moments. Auburn won national titles in 1957 and 2010 and has claimed seven SEC titles through the years, and, to its credit, the program has produced more Heisman winners than its neighbor to the west (Pat Sullivan in 1971, Jackson in 1985, Newton in 2010). In almost any other state in the union, Auburn would be the standard-bearer, and it still stands as one of college football's iconic programs.

1926-30. Through the 1920s and much of the 1930s, the South just wasn't very good at football. Alabama rose to prominence in the 1920s, and Georgia Tech was strong before that, but as we will see, much of what now constitutes the SEC West was a non-entity in college football's early days as a national sport. Following Mike Donahue's departure in 1923, Auburn's program spent much of the following decades aimless. The Tigers went 17-14-5 from 1923-26, then fell apart, winning just six games in four seasons from 1927-30. The Tigers were not playing Alabama in these years, but against Georgia and Georgia Tech, AU went 0-15-1 from 1923-30. Combined score of these 16 games: Opponents 308, Auburn 48. Auburn saw some success under Jack Meagher in the late-1930s -- the Tigers attended the Bacardi Bowl in 1936 and the Orange Bowl in 1937 and finished ranked 16th in 1942 -- but the program bottomed out in three seasons under Earl Brown from 1948-50. Combined record: 3-22-4.

In 1951, Ralph "Shug" Jordan entered the premises. His success was relatively sporadic, but he made Auburn a household name in the football universe. Auburn went 7-13 in his first two seasons but improved quickly thereafter. Auburn went 30-10-2 from 1953-56, then broke through in a major way. They went 10-0 and won the national title in 1957, then went 9-0-1 in 1958, missing out on a second title thanks to a 7-7 tie versus Georgia Tech. In 25 seasons under Jordan (after whom Auburn's stadium is named), Auburn finished in the Top 10 seven times, in the Top Five three times. Though his predecessor, Doug Barfield, did not see the same success (in five seasons, Auburn went 29-25-1 -- 27-27-1 on the field, plus two forfeited wins from Mississippi State -- attended no bowls and never beat Alabama), the table was still set for a lovely run in the 1980s.

Of course, the NCAA then came calling. Dye became the Jim Tressel of his day, finding trouble when he sat on information of illegal benefits. Dye's tenure came to a close with NCAA punishment and back-to-back five-win seasons. The punishment wasn't enough to prevent Auburn from naming their playing field after him, of course. (If you're wondering why Larry Blakeney never found a big-time coaching job after a large run of success at Troy, refer to the presence of his name in the two articles linked above.)

(Note, too, the presence of Bobby Lowder, one of the most notorious boosters in the history of college football who remained a presence on Auburn's board of trustees until this past April.)

Two Heisman winners and the receiver (Beasley) whose prolific connection with Sullivan likely earned Sullivan his Heisman. The three Heisman winners -- Sullivan, Jackson and Newton -- were also honored with statues in April.

Auburn plays its home games at Jordan-Hare Stadium, which is after Shug Jordan and Cliff Hare, a member of Auburn's first football team and eventual dean. Its capacity: 87,451. (The population of Auburn, Alabama: 53,380.) 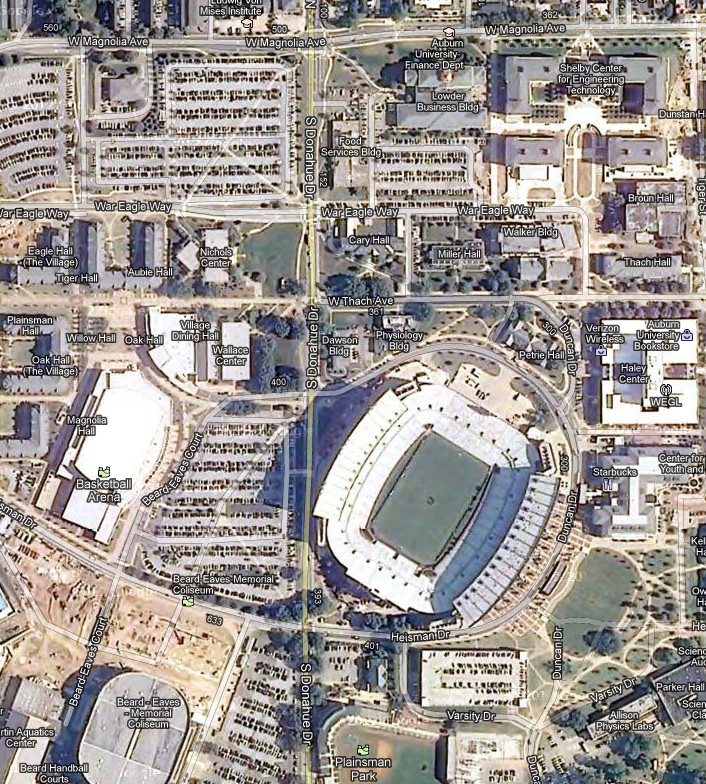 View their statistical profile here. Auburn lost so much from its 2010 title team and predictably took a hefty step backwards in 2011. The Tigers return almost their entire defense this fall, though we'll see what kind of impact the losses of both offensive coordinator Gus Malzahn and running back Michael Dyer have on the offense.