We round out Auburn Week with a celebration of one of the most transcendent pure athletes of our lifetimes. 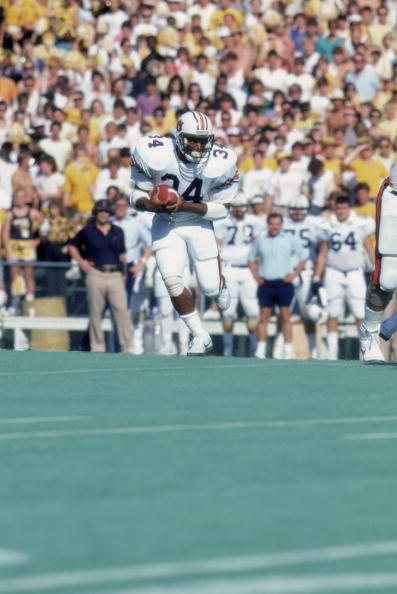 Personally, I was lucky enough to be a kid in Kansas City when the Bo-nomenon was taking place so I had a great view of the entire thing. I remember my dad calling me into the room once in 1985 on Thanksgiving weekend to watch this kid at Auburn and the first time I saw him he ran for a touchdown. I was sold. Just a month earlier I had seen my baseball team win their only World Series, and my 9-year old brain decided "I want this guy to play for Kansas City!"

Well, I got my wish. In baseball.

There aren't enough superlatives to describe Bo Jackson, and now matter how you try to exaggerate him you never really seem to be able to go overboard. He personified awesome, and there was nothing he couldn't do.

So what are your memories of Bo Jackson? What was his greatest strength? His greatest moment? Should he be in the Pro Football Hall of Fame? What kind of impact could he have made on baseball if he hadn't gotten hurt dabbling in his hobby? Share your thoughts as we end Auburn week talking about the single greatest athlete I've ever seen in my life, both in reality and even in video games.

Caption for the above photo: 1985: Bo Jackson #34 of Auburn University carries the ball during a game in the 1985 season. ( Photo by: Scott Cunningham/Getty Images)