Mizzou Moves To The SEC: Mississippi State Football Caught In The Undertow

Share All sharing options for: Mizzou Moves To The SEC: Mississippi State Football Caught In The Undertow

From Auburn, we now circle back, 244 miles to the northwest, to Starkville, Mississippi. It's Mississippi State Week! 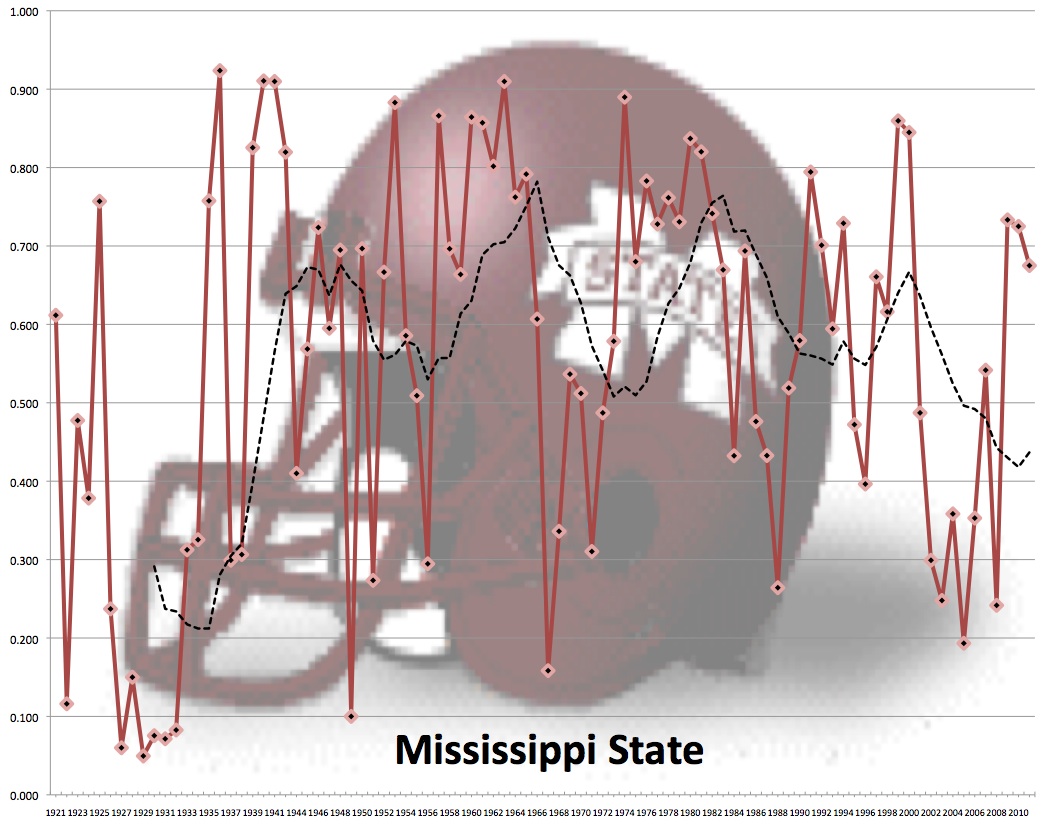 Mississippi State's Percentile Performance Since 1921 (according to S&P+ and Est. S&P+).
The dotted black line is the school's ten-year average.
For more on Est. S&P+, start here.
(Original helmet photo via NationalChamps.net)

The SEC is the best, most consistently deep football conference in the country. Of that, there is no doubt. But that doesn't mean that every program has had its day atop the college football universe. Mississippi State has a deep set of unique traditions -- the Egg Bowl and those damned cowbells, to name two -- and has dealt with high expectations from time to time, but the Bulldogs have not quite seen the success of other conference rivals. They have finished in the AP Top 10 just once (after a 10-0-1, Orange Bowl-winning campaign in 1940) and have attended a small handful of 'major' bowls since (2011 Gator Bowl, 1999 Cotton Bowl, some Peach Bowls, and a couple of Sun Bowls, if we're counting those). That said, they have won 16 games in the last two seasons under Dan Mullen, Urban Meyer's former offensive coordinator, and they are positioning themselves somewhere between "tough out" and "consistent Top 25 team."

1957-66. Here's where numbers and schedule adjustments tell a funny tale. How strong was the SEC in the late-1950s and early-1960s? Mississippi State experienced just two winning seasons from 1957-66 but, when adjusted for schedule strength, still graded out as a Top 25 team five times in that span. Ole Miss was at its peak, Auburn and LSU both won national titles, Alabama reestablished itself under Bear Bryant, Georgia Tech was still strong (and in the SEC), et cetera. This conference was perhaps more loaded then than it is now, and MSU got caught up a bit in the undertow. (Hell, even Memphis was damn good at this point.) Still, the Bulldogs did finished 14th in 1957 and, in their second season under Paul Davis, won the Liberty Bowl, 16-12 over N.C. State, in 1963.

Emory Bellard, who invented the Wishbone while an assistant at Texas, led the Bulldogs to a 17-7 record in 1980-81 (they were picked 14th in the 1981 preseason polls and rose as high as seventh, but lost to, among other teams, Missouri), then faded. Jackie Sherrill generated seven seasons of seven or more wins in a 10-year span, but, being Jackie Sherrill, left with MSU on probation in 2003. Sylvester Croom cleaned up the program but didn't win much (eight wins in 2007, 13 in his other four years), and Mullen took over in 2009.

No Mississippi State jerseys have officially been retired, but No. 21 is currently out of circulation in honor of the late Keffer McGee, who died in a swimming accident in August 1997. As for statues around the stadium, it doesn't appear there are any, at least of humans. If you want to see a bulldog statue, however, you're in luck.

MSU plays its home games on Scott Field at Davis Wade Stadium. Capacity: 55,000 and change. However, a six-thousand seat expansion is in the works and should be complete by 2014. 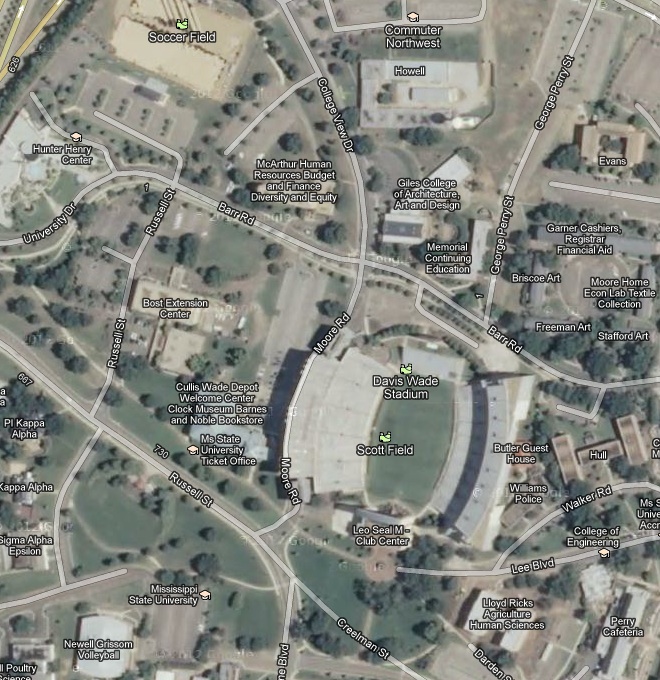 Program highlights, from 1941-00.
MSU takes out Georgetown (in spectacular jerseys, no less) to win the 1941 Orange Bowl
A late goalie stand leads to a historic upset of Bear Bryant and Alabama in 1980.
Two late scores give Mississippi State a win over Arkansas and the SEC West title in 1998.
MSU acquits itself well against Tennessee in the 1998 SEC Championship but falls short.
Two late scores give Mississippi State a crazy win in the 1999 Egg Bowl.
God bless the 2000 Snow Bowl. (Full game here.)
Get used to cowbells. Oh god, get used to cowbells.
MSU romps over Michigan in the 2011 Gator Bowl.
Recent Egg Bowls have been rather kind to MSU.

View their statistical profile here. MSU is stuck in the toughest division in college football and could take a step backwards after losing quite a few difference makers, including defensive tackle Fletcher Cox and running back Vick Ballard.