Mizzou Moves To The SEC: Ole Miss And College Football's Most Underrated Coach

Share All sharing options for: Mizzou Moves To The SEC: Ole Miss And College Football's Most Underrated Coach

Put on your khaki tailgating pants, and grab a red solo cup. It's Ole Miss week! 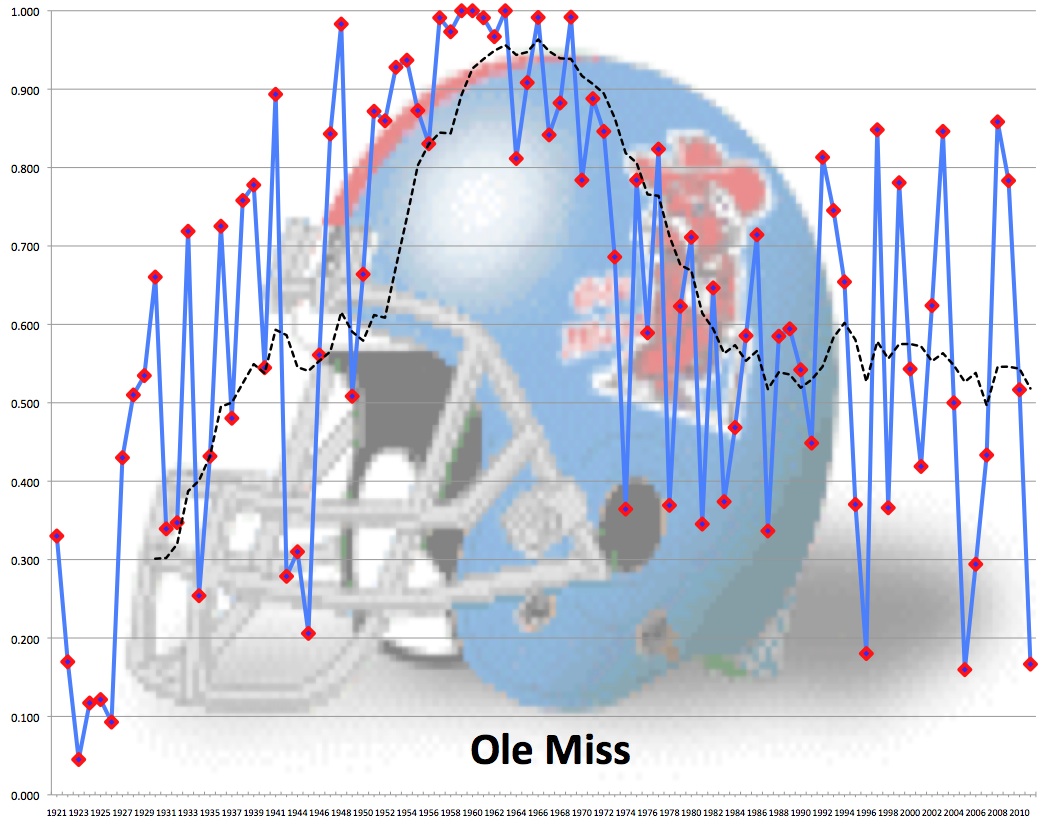 Ole Miss's Percentile Performance Since 1921 (according to S&P+ and Est. S&P+).
The dotted black line is the school's ten-year average.
For more on Est. S&P+, start here.
(Original helmet photo via NationalChamps.net)

Your question, then: if your long-term performance really never changes, would you prefer severe ups and downs to, say, constant 7-5 seasons? Would you trade more low moments for more high ones, or would you prefer to simply keep cranking out low-tier bowl games every year?

Regardless of how odd Ole Miss' fortunes have been through most of our lifetimes, one thing is certain: this was an absolutely incredible program in the late-1950s. But we'll get to that.

1954-63. A couple of years ago, I began to devour whatever old college football books I could find. I love being able to go back to the source, so to speak, and read old books and old articles, things that still hold proper context for events that took place long ago. My favorite of these old finds was a book called Rebel Coach by John Vaught, who coached at Ole Miss from 1947 to 1970. If you can find a used copy on Amazon (or anywhere else), I would recommend picking it up. It is an easy read, and it tells an awesome tale of how he both built and maintained an Ole Miss program that very well could have been the best in the country in the late 1950s. Vaught inherited a 2-7 program an, in his first two years, went 17-3, leading the Rebels to a Delta Bowl appearance (Ole Miss 13, TCU 9) and two Top 15 finishes; they went 9-2 with future Pro Bowl quarterback Charlie Conerly behind center in 1947, then improved slightly to 8-1 the next year.

It was a little too easy, actually -- in his book, Vaught says "I don't deny beginners luck in 1947" -- and when the Rebels regressed beginning in 1949, they regressed pretty far. Ole Miss went just 15-13-2 from 1949-51. After losing a couple of superstars, Ole Miss didn't have the depth to compete with the move to platoon football, and it took Vaught a while to build depth. From Rebel Coach:

Looking back on those dismal times, I'm not sure I was ready for this new approach. Platoon football calls for specialists -- one-way athletes. Everything in my background had been built around the best athlete -- a boy who played offense and defense. It seemed in 1949 that the one big puzzle the staff and I had been working to put together suddenly became two.

Those years depressed me. It was the only time I seriously considered leaving Ole Miss. I don't like to lose, and I told myself that if I couldn't win I wasn't going to stay in the game. I would do something else.

Of course, he didn't leave. And even in 1949 and 1950, he began to win some key recruiting battles close to home. The Rebels bounced back to 6-3-1 in 1952, then took a huge step forward, finishing 8-1-2 and seventh in the country in 1952; their only loss: to undefeated Georgia Tech in the Sugar Bowl. The momentum just kept building and building after that.

In an era with so few bowls, the Rebels went to bowls 18 times in 20 years from 1952-71. After a bit of a regression (28-14-2 from 1965-68), Ole Miss surged again with Archie Manning at quarterback, finishing No. 8 in 1969 (with another Sugar Bowl win). Vaught's health started to fade, and he retired after a disappointing 7-4 season in 1970. He returned briefly in 1973, when successor Billy Kinard's level of success faded (he went 10-2 in 1971, then just 6-7 in 1972-73) and won another five games, but that was it. He was inducted into the College Football Hall of Fame in 1979, and honestly, he might be the most underrated coach of all-time. Yes, he's in the Hall of Fame. Yes, Vaught-Hemingway Stadium is partially named after him. But the casual fan is perhaps only somewhat aware of Vaught and his success, and that's a shame. He is an all-time great.

Ole Miss has retired two numbers: No. 18 (Archie Manning) and No. 38 (Chucky Mullins). Manning, you probably know. Mullins, on the other hand, has a tragic story. He shattered four vertebrae in a 1989 game versus Vanderbilt and was paralyzed. Ole Miss established the Chucky Mullins Trust Fund to manage an outpouring of donations that came in Mullins' name, and he became an inspirational tale.

Chucky's battle with his physical disability and his undefeatable spirit changed the University of Mississippi. For months after the tragic accident, Chucky endured the grueling challenges of rehabilitation. During the difficult time, Chucky's gritty determination and positive spirit touched the lives of literally hundreds of people. More than a million dollars was raised for the Chucky Mullins Trust Fund. He was visited in the hospital and later at home by such stars as Walter Payton, Janet Jackson and President George Bush. Chucky's accident and his unbroken spirit transcended football. The people of Mississippi, the South and the entire United States rallied around this remarkable young man.

When Chucky returned to Oxford in August 1990 to begin living in the specially-equipped house built by the Trust Fund donations, he announced a determination to return to Ole Miss and pursue a degree. Against all odds, in January 1991, he did return to the classroom.

Mullins defeated the odds by returning to school, but fate took another cruel turn; he died of a pulmonary embolism on May 6, 1991. Since 1990, Ole Miss has been awarding the Chucky Mullins Courage Award in his honor.

Each award recipient receives a framed Mullins jersey and has the honor of wearing Mullins' No. 38 on the field the following season. In 2006, the number was officially retired, joining Archie Manning's No. 18 as the only retired numbers in the Rebels' storied football history. A 38 patch, rather than the jersey number, was worn from 2006 until 2010. The decision was made in March 2011 for the jersey to remain retired and be worn only by the Chucky Mullins Courage Award winner each year.

As for statues ... well ... I would have hoped there would be a Vaught statue somewhere. There is indeed. There's also this.

Ole Miss plays at Vaught-Hemingway Stadium, capacity: 60,580. It was Hemingway Stadium until October 12, 1982, when Vaught's name was added. Perhaps more notable than the stadium, of course, is The Grove. Talk to any Mizzou fan who attended the 2007 game between the Tigers and Rebels, and they might remember the final score. But they'll definitely remember tailgating at The Grove. 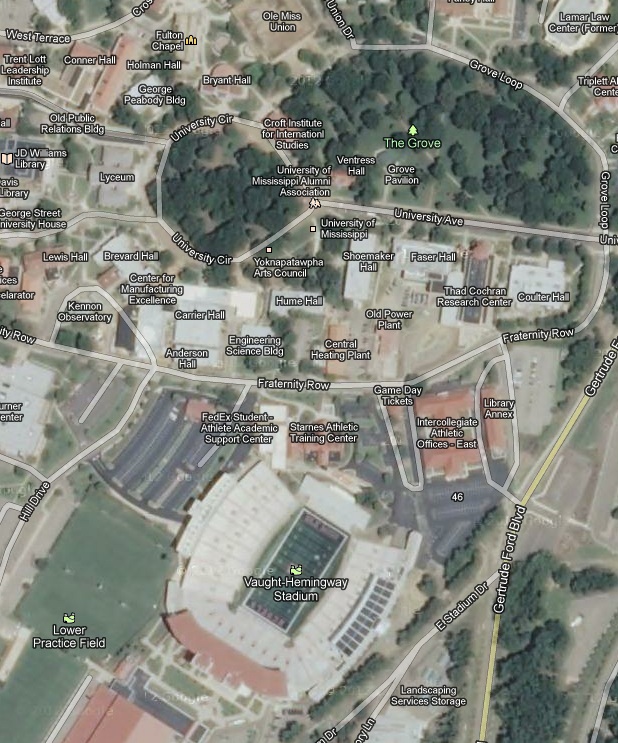 Season of Glory, the 1959 Ole Miss Rebels (Part 1 of 5)
Perhaps the greatest team of all-time (the 1959 Ole Miss Rebels) loses at LSU on Halloween 1959 because of one of the most amazing plays of all-time.
Ole Miss defeats Frank Broyles' Arkansas Razorbacks, 12-7, in the 1963 Sugar Bowl (Part 1 of 4)
Archie Manning and Ole Miss loses a thrilling 33-32 decision to Alabama in 1969
Ole Miss again defeats Arkansas in the 1970 Sugar Bowl (Part 1 of 4; side note: the SugarBowlClassic YouTube channel is outstanding)
Ole Miss upsets No. 12 LSU on a late missed field goal, and the Ole Miss radio guy loses his damn mind.
The incredible intro to the 2003 game between No. 15 Ole Miss and No. 3 LSU. (And yes, the Tigers rained on the Rebels' parade once again, 17-14.)
Houston Nutt > Urban Meyer. Jevan Snead and Ole Miss shock Florida in The Swamp in 2008.
Archie Manning talks Egg Bowl in 2009.

View their statistical profile here. Hugh Freeze has some rebuilding to do.

Another series lead for the Tigers (5-1). And if Mizzou and Ole Miss play only twice every 12 years, it will be a long while before the Rebels can catch up.