Mizzou Moves To The SEC: Alabama Is Good At Football

Share All sharing options for: Mizzou Moves To The SEC: Alabama Is Good At Football

I've been looking forward to this for a while. SEC Week(s) have begun on Rock M Nation! Over the next 12 weeks, we will be introducing Missouri's new conference rivals with a series of pieces that will look at each team's status in football, basketball and other sports, and hopefully we will get the opportunity to interact with fans of each school along the way. 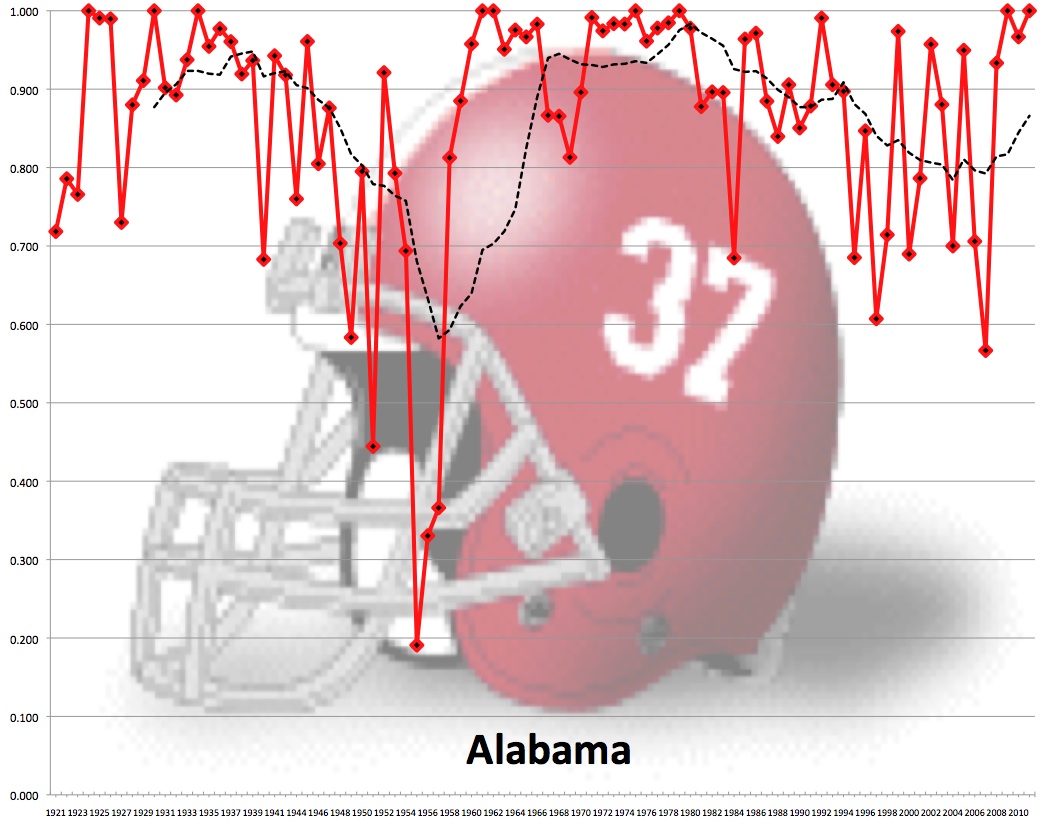 Alabama's Percentile Performance Since 1921 (according to S&P+ and Est. S&P+).
The dotted black line is the school's ten-year average.
For more on Est. S&P+, start here.
(Original helmet photo via NationalChamps.net)

It isn't sucking up to your new conference mates to say that Alabama has as good a claim as anybody to the title of Nation's Best College Football Program. The Crimson Tide lay claim to 14 national titles (it is a running Internet joke to considerably inflate that total), 22 SEC titles, countless All-Americans, and success in nearly every era of college football. Wallace Wade took over in Tuscaloosa in 1923, led the Tide to an undefeated season and Rose Bowl title in 1925, and from there it was on. As you see from the chart above, only the 1950s were unkind to Alabama, as the Tide went just 13-23-4 from 1954-58; but even that decade still produced an Orange Bowl title in 1952 and a Top 10 finish in 1959. Since Bear Bryant took over in 1958, Alabama has suffered just four losing seasons; they went 5-6 in 1984, 4-7 in 1997, 3-8 in 2000 and 4-9 in 2003. Outside of Georgia Tech, Alabama was perhaps the first truly dominant power in the southeast. They have company now in that regard (to say the least), but even with the increased level of competition, they have still won two of the last three national titles.

1953-57. As we have seen time and again, even national powers like Alabama, with all the money and fan support that one could hope for, are only as good as their next coaching hire. Alabama stumbled when replacing Gene Stallings with Mike DuBose in 1997 (facing NCAA penalties, DuBose went just 24-23 in four seasons) and replacing Dennis Franchione with Mike Shula in 2003 (again facing NCAA restrictions, 'Bama went just 26-23 from 2003-06 (their official record is worse than that thanks to vacated wins). But there is only one true black mark when it comes to Alabama's football history (at least as long as we aren't talking about NCAA penalties): the Jennings Whitworth era. Whitworth took over a fading program from Red Drew in 1955 and proceded to go 0-10, 2-7-1 and 2-7-1 in three seasons. That Alabama had soared under Wallace Wade, Frank Thomas and (briefly) Drew didn't matter; Whitworth struggled and Alabama faded. The Tide famously lost to eventual national champion Auburn, 40-0, in 1957, and as Beano Cook told me in an interview a couple of years ago, the loss cost Auburn dearly. Alabama fired Whitworth and brought in a successful Texas A&M coach named Paul William "Bear" Bryant.

We can debate whether the USC defeat was the true reason why Bryant signed John Mitchell for the 1971 season, Alabama's recruiting strategy changed a decent amount around this time. That shift, combined with a switch to (and mastery of) the Wishbone offense, pushed Alabama into the stratosphere. The Tide went 11-1 in 1971, losing only to national champion Nebraska in the Orange Bowl. They outscored opponents, 406-150, in 1972 but lost two tight battles to Auburn and Texas to end the season. They outscored opponents, 477-113, in 1973, but their surprising Sugar Bowl loss to Notre Dame cost them a unanimous national title (they claim a split title). They went 11-1 again in 1974 but lost again to Notre Dame, this time in the Orange Bowl. And in 1975, they lost to Missouri in the season opener (incredibly, it was just their second regular-season loss since 1970), then outscored their next 11 opponents, 367-52. Their point differential suggests this was quite easily their best five-year performance, but post-season issues cost them a few titles.

1971-80. What do I always say? Just keep putting a high-quality product on the field, and eventually the titles will follow. Alabama went 11-1 in 1973, 74, 75 and 77, and eventually the titles followed. Alabama overcame an early-season loss to USC to finish 11-1 in 1978, and upon beating No. 1 Penn State in the Sugar Bowl, they claimed a split title with the Trojans. In 1979, there was no split. Alabama allowed just 67 points all season, shut out five teams and allowed double-digit points only twice on their way to another title. Eventually, Bryant's momentum faded a bit. In his final three seasons (1981-83), Alabama 'only' went 25-10-1, great for just about anybody and a step backwards for Bryant.

Alabama doesn't retire numbers, but they do put up statues. And all you have to do is win a national title! So when you tour the premises sometime in the next 13 years (whenever Mizzou actually plays at Alabama), be sure to say hi to the Wallace Wade, Frank Thomas, Bear Bryant, Gene Stallings and Nick Saban statues.

Alabama plays at Bryant-Denny Stadium, the fifth-biggest college football stadium in the country (capacity: 101,821) and second-biggest in the SEC (behind Tennessee's Neyland Stadium). It is named after Bear Bryant (duh) and former university president George Denny. It used to be simply called Denny Stadium, and it's, uh, big. I do love that it has almost outgrown its surroundings at this point; expansion pretty much has to go straight up. And it does. 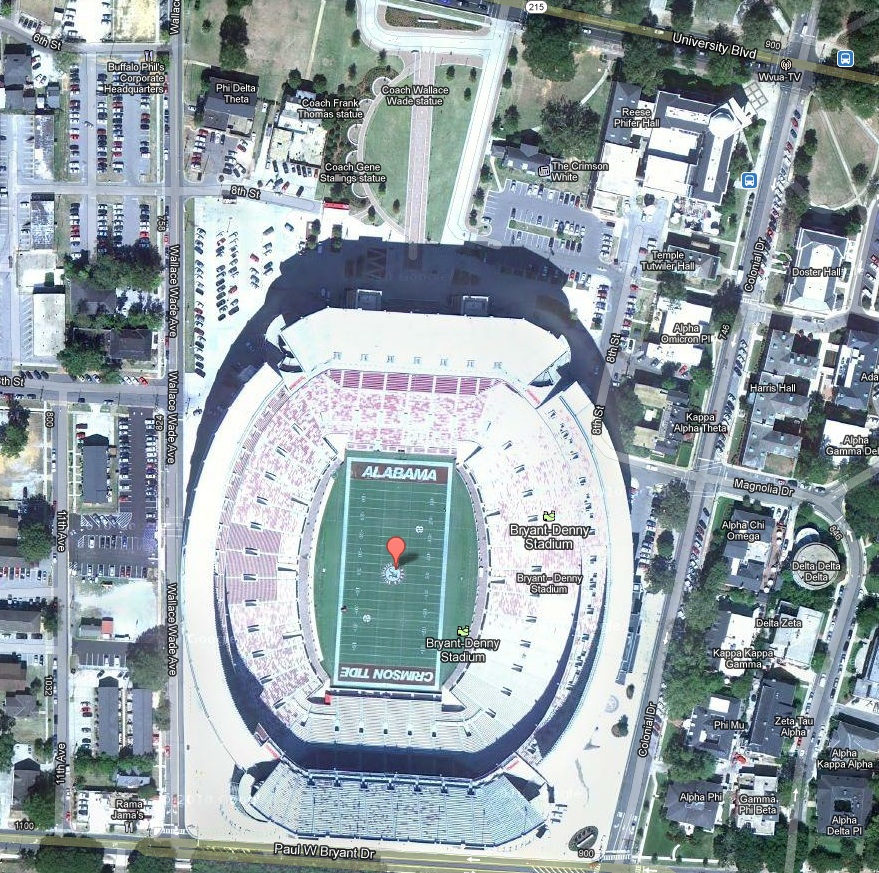 View their statistical profile here. Quite simply, Alabama is going to be good again. They must overcome solid losses at linebacker and in the secondary, and we'll see if they can maneuver through a tough schedule without tripping up (it isn't out of the realm of possibility that they field a team a lot like the 2010 squad, which was mostly great but suffered just enough breakdowns to knock them out of national title contention), but they are going to be pretty easily projected No. 1 in our preseason Football Outsiders projections, and it's pretty easy to see why: they were No. 1 last year, they are No. 1 over the last five years, and they are No. 1 in recruiting. Of course the numbers are going to like them.

As it currently stands, Missouri is the only SEC team with an all-time winning record over Alabama: 2-1.

During bowl practices, Dan Devine got sneaky--he installed a completely new formation for Mizzou, the Power-I. Alabama's defensive stalwarts never knew what hit them--Mizzou would rush for 404 yards. Meanwhile, the Mizzou defense thrashed the Tide, giving up just 45 rushing yards and 68 passing yards. Tide QB Scott Hunter went just 7-for-25 passing and was sacked for a loss of 61 yards. [...]

Mizzou was up 21-10 and then poured it on. Greg Cook capped a 179-yard rushing day with a 37-yard touchdown run, then Dennis Poppe stepped in front of a Hunter pass and took it 47 yards for a touchdown and a 35-10 lead.

The 25-point loss was Alabama's worst bowl loss ever, which was saying something since they had already played in 22 bowl games by 1968. It gave 'Bama their first three-loss season since Bryant's first year in Tuscaloosa (1958), and most importantly, it gave Mizzou a major shot in the arm for 1969.

Mizzou had established its "giant killer" reputation long before the crazy 1976 season that we've documented recently. In 1972, they took out Notre Dame. In 1973-74, Nebraska. But they weren't dominant in any of those games. They crushed Alabama on Legion Field to start 1975.

In the early part of the 1970s, Mizzou had a decent amount of firepower, but aside from a nice run in 1973, they had been missing the dominant defense that they had through much of the 1960s. That changed in the 1975 season opener, as they completely shut down #2 Alabama's potent wishbone attack, holding them to a startling 31 rushing yards.

It was a week before the NFL season started, so ABC elected to move Mizzou-Bama to Monday Night Football, and Mizzou put on a shocking show in front of a national audience. A 20-point underdog, they played one of the most perfect first halves in Mizzou history. ... Mizzou didn't punt until four minutes remained in the first half, but after they did, Ken Downing picked off a hurried Richard Todd pass, and Gibbons bounced a line-drive field goal attempt in off the crossbar, and Mizzou shocked the country by going up 20-0 at halftime. [...]

When it was over, Columbia erupted. Students filled the Quad, where fireworks were shot and Marching Mizzou showed up. The impromptu parade spilled into downtown, where somebody etched "Missouri 20, Alabama 7, 9-8-75" into fresh cement. You just simply did not do to a Bear Bryant team what Mizzou did to them that Monday night. This was the only game 'Bama would lose in 1975.

A home opener against the #1 team in the country is going to be a pretty hot ticket no matter what, and sure enough pretty much every hotel room in the city of Columbia had already been booked before Missouri went out and beat Notre Dame? But after the huge upset and Missouri's meteoric rise from unranked to #11 in the country? Let's just say it was a good thing that the university had just completed the stadium expansion in the South endzone. [...]

Three minutes into the second quarter, the Crimson Tide kicked a field goal to go up 17-0, and finally Mizzou woke up. Led by James Wilder and Phil Bradley, they methodically marched down the field, scoring when Earl Gant plowed in from four yards out. The Mizzou defense was perking up by this point, and they quickly forced an Alabama punt. After a short Wilder run, Bradley ran a picture-perfect option keeper to the right, found a crease, and shot out the backfield like a cannonball. With great downfield blocking, he weaved his way through the entire Alabama defense for a 69-yard touchdown. Bradley went crazy in the endzone, the crowd (many of whom were basically just standing outside the north endzone) were doing the same. Suddenly Memorial Stadium was a hornet's nest, and the #1 team in the country was stumbling.

Then it got even worse for Alabama. On their second play of the following drive, Rutledge threw an out toward Neal, but it hung in the air too long. Russ Calabrese stepped in front of Neal for the interception, and weaved his way into the endzone for a pick six. After sleepwalking through the first 18 minutes of the game, Missouri had woken up and played 12 of the best minutes a Mizzou team had ever played. They would take an improbable 20-17 lead into halftime.

Bear Bryant won a lot of games in his career. In the process, there were probably quite a few times where he had to light a fire under an underachieving bunch at halftime. It was probably pretty familiar territory for him, and to say the least, he said the things that needed to be said. 'Bama came out of the locker room having been verbally slapped around a bit, and in turn they decided to slap Missouri around.