Mizzou Moves To The SEC: Earthquakes And Badgers On The Bayou

Share All sharing options for: Mizzou Moves To The SEC: Earthquakes And Badgers On The Bayou 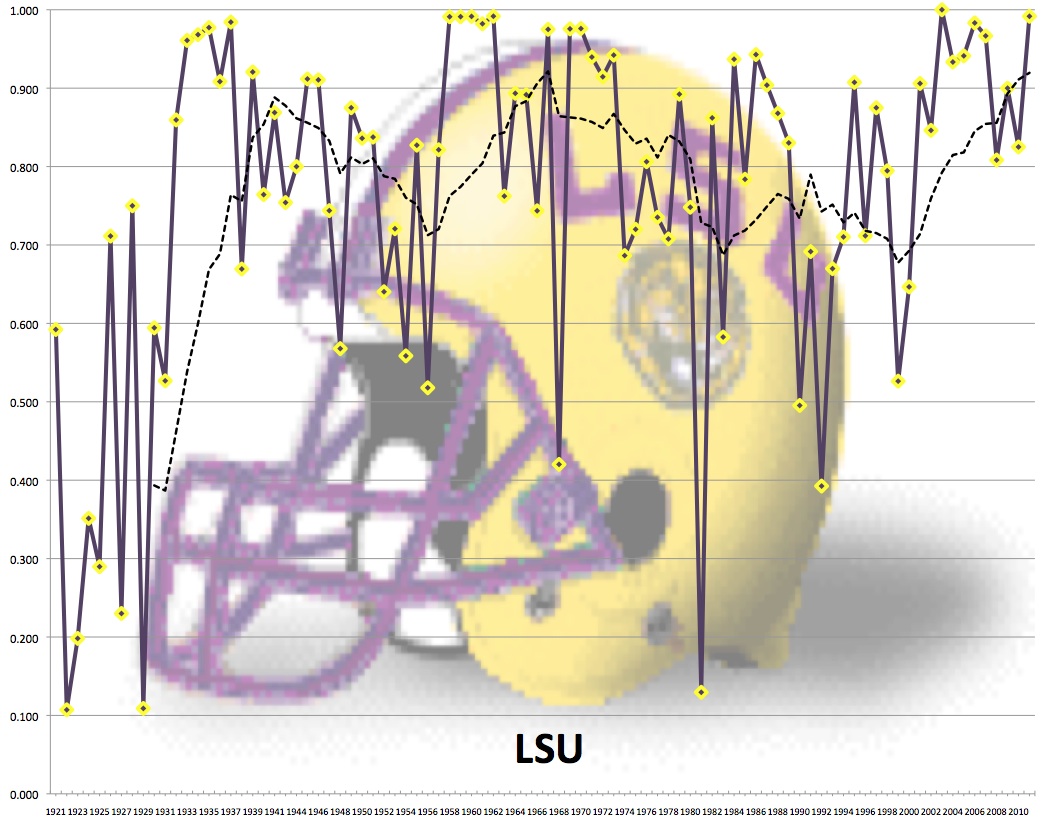 LSU's Percentile Performance Since 1921 (according to S&P+ and Est. S&P+).
The dotted black line is the school's ten-year average.
For more on Est. S&P+, start here.
(Original helmet photo via NationalChamps.net)

Dietzel had just about the perfect assistant coach's resume when he took the LSU job. He had coached for two seasons under Bear Bryant at Kentucky, then for two seasons under Red Blaik at Army. But he was just 31 when the 1955 season started, and it took him a little while to find his way in Baton Rouge. LSU went just 11-17-2 in his first three seasons. But two things happened to turn around the Dietzel era: 1) he created the Chinese Bandits, and 2) Billy Cannon signed with LSU.

Platton rules were odd in the 1950s. The NCAA kept tinkering with substitution restrictions, and Dietzel took full advantage of the new rules in 1958.

In 1958 the NCAA loosened substitution rules to allow players who left the game to return at the start of the next quarter. The result was a lot of experimentation by coaches to capitalize on the changes.

Alabama instituted a system of three squads designated by color - red, blue and white. The players were identified by a poker chip worn on their necks to keep track of who was eligible to go in at any given time. That made it possible to send in key players when necessary but not draw a penalty when forced to replace them.

Dietzel had another idea. He recognized he was going into the season with a very deep team but one that had a limited number of players who were effective on both offense and defense. His solution was to organize his team into to a "platoon" system that featured three squads of 11 players with specific skill sets that could be swapped out en masse as the flow of the game demanded it.

The first squad, called the White team, was filled with the two-way standouts. They got the bulk of the playing time. The second squad was originally called "Gold," but became known as the "Go" team due to a sportswriter’s error and since they were intended to be use on the offensive side of the ball.

The third squad was made up of the defensive specialists. Dietzel dubbed them "The Chinese Bandits." The name came from the newspaper comic strip Terry & the Pirates that declared the self-said bandits to be "the most vicious people in the world."

Dietzel's tinkering created probably the deepest team in America. It was certainly one of the best defensive units; the Bayou Bengals allowed more than seven points in a game just once in 1958, allowed 53 for the season, won four shutouts, and took home the 1958 national title.

Billy Cannon, meanwhile, played for LSU from 1957-59, won the UPI's 1958 player of the year award, and took home the 1959 Heisman Trophy, in part because of one of the greatest punt returns of all-time. Spurred by the success of 1958, LSU spent much of 1959 ranked No. 1 in the country, then finished fourth again in 1961 following Cannon's departure. Dietzel left to take the Army job (a thought that seems quite a bit odder now than it would have in 1962), but his replacement, Charles McClendon, kept the solid seasons coming for a while. In 18 years under McClendon (who played for Bear Bryant at Kentucky), LSU finished in the Top 13 eight times and won nine games for five consecutive years (1969-73). LSU won just 38 games over his last six seasons, however, and he retired after 1979.

For the next two decades, the LSU job chewed up seemingly qualified head coaches and spit them out. Jerry Stovall, an LSU All-American and an assistant under McClendon, went 22-21-2 over four seasons (2-2 versus Tulane) and was dismissed. Bill Arnsparger, one of the most respected defensive coaches of all-time, actually did quite well (26-8-2 from 1984-86) but left to take the Florida athletic director position (where he hired Steve Spurrier as Florida's head football coach). Mike Archer, Arnsparger's defensive coordinator, went 10-1-1 in 1987 ... and then 17-17 over his next three years.

1990-94. Actually, their worst worst period was in the 1920s, just like the Mississippi schools (only not as low). But it's no fun writing that again. So we're going to go with a runner-up.

#20. Billy Cannon has gone through some awkward, awful times since his playing days ended, but his on-field exploits were untouchable. He was the greatest athlete in college football in the late-1950s, and it was a no-brainer for his number to be retired.

#37. Tommy Casanova was basically the defensive version of Billy Cannon. The 1971 Sports Illustrated cover boy was a three-time All-American defensive back, and his number was retired in 2009.

LSU's Tiger Stadium is large (92,542, to be expanded beyond 100,000 soon) and very, very loud. It is probably most well-known for the Earthquake Game.

With national rankings at stake and a national audience watching on ESPN, LSU quarterback Tommy Hodson threw a touchdown pass to tailback Eddie Fuller on fourth down with 1 minute, 47 seconds remaining in the game. The eruption of the crowd registered as an earthquake on the seismograph located in LSU’s Howe-Russell Geoscience Complex.

Today, Hodson and Fuller say that after 20 years, the 1988 LSU-Auburn game is still an earthshaking experience. In fact, both say the famous play is even bigger now than it was then, since it has taken on a life of its own as part of LSU folklore.

"Initially, I didn’t believe it," Fuller recalled of first hearing that the crowd noise registered on the seismograph. "I think it took a couple of years for it to sink in. It never dawned on me how big that play was here until years later, when I came back to LSU." 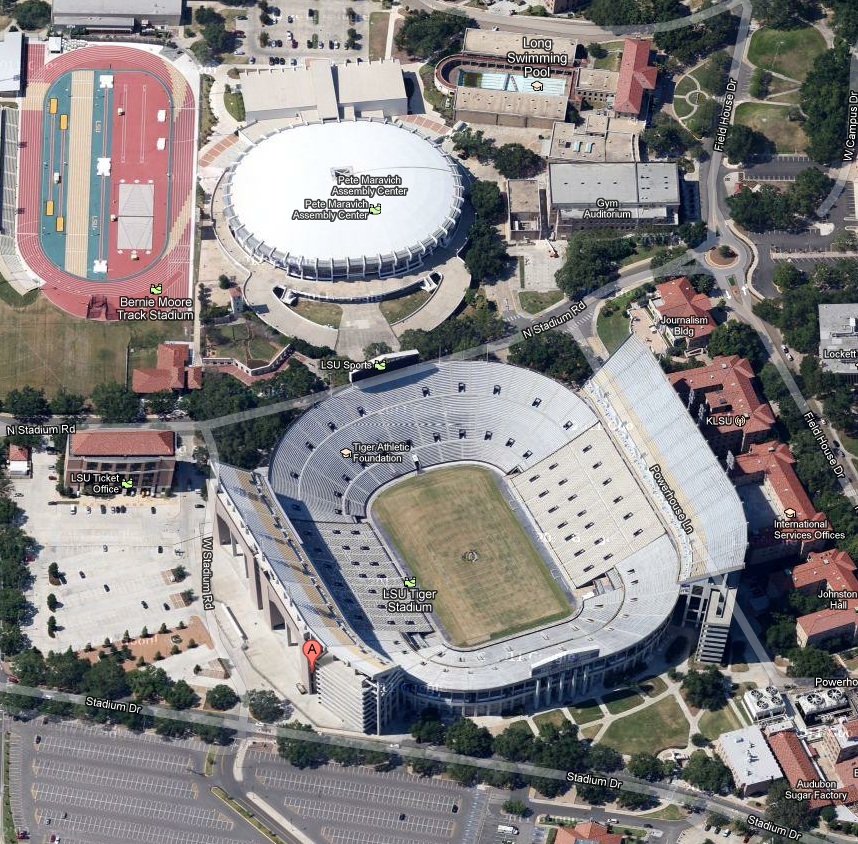 "Classic" LSU football
Running out of the Tunnel at Tiger Stadium (Really, I could have just chosen this one 10 times.)
The LSU band plays "The Chinese Bandits"
LSU scores late to beat Auburn in the Earthquake Game.
The seismograph
LSU whips a really good Georgia team to take the 2003 SEC title.
LSU wins the 2003 national title.
LSU wins the 2007 national title.
Les Miles eats grass.
The Honey Badger

View their statistical profile here. Yeah, they're going to be really, really good again in 2012.

And yeah, Wing was almost as much of a no-brainer as Mathieu.