Mizzou Moves To The SEC: The Ol' Ball Coach And The Nouveau Riche

Share All sharing options for: Mizzou Moves To The SEC: The Ol' Ball Coach And The Nouveau Riche

Your incredibly out of order Florida Week concludes with, finally, a look at the Gators of the gridiron. 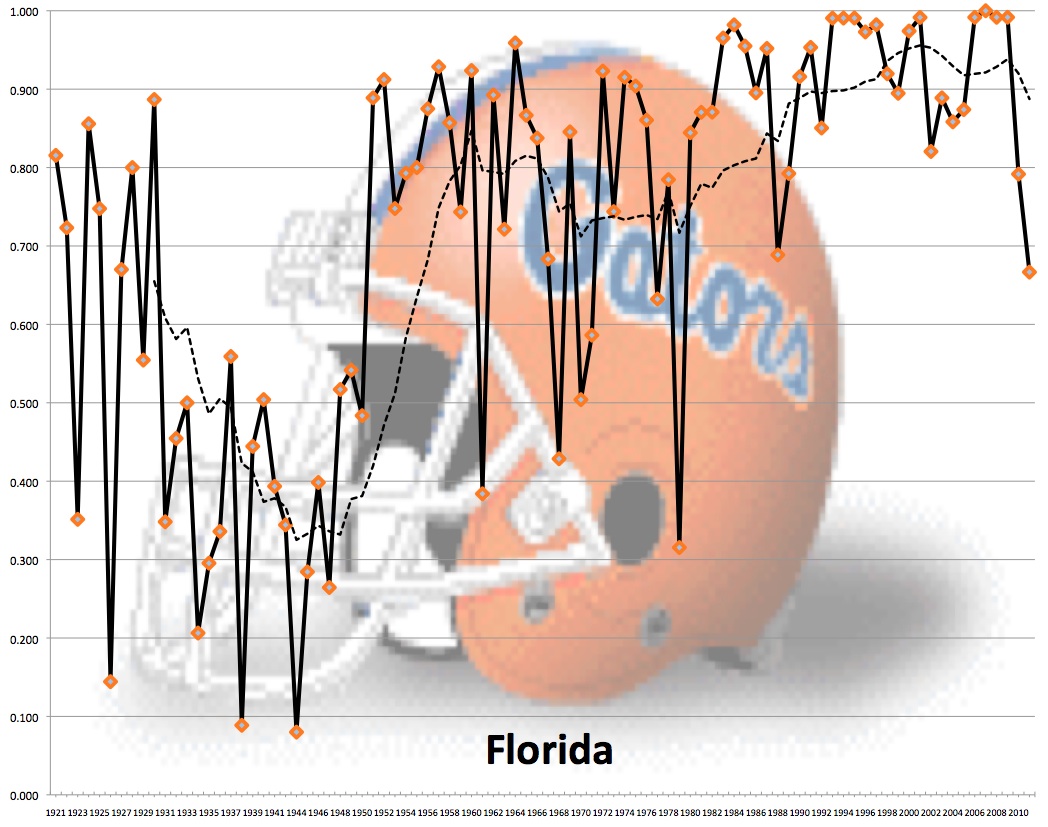 Florida's Percentile Performance Since 1921 (according to S&P+ and Est. S&P+).
The dotted black line is the school's ten-year average.
For more on Est. S&P+, start here.
(Original helmet photo via NationalChamps.net)

Before we dive into Florida's football history (which isn't as Chelsea-like as the basketball team, but still has a bit of Nouveau Riche to it), I'd like to first point out just how weird it must be for Steve Spurrier to be coaching a division rival. He won a Heisman at Florida in the 1960s, returned as the Gators' head coach in the 1990s and brought the program's first national title to Gainesville in 1996. But after a horrific sojourn to the pros in the early-2000s, he ended up at South Carolina. Imagine if Chase Daniel were to lead Missouri to the 2037 national title, then end up coaching at Tennessee 10 years later? Mixed feelings, man, mixed feelings.

Anyway, on with the show. After decades as a decent-to-solid program, Florida truly joined the college football ruling class in the 1990s. That we know. But let's take a look at the pre-Spurrier years.

Since 1950, it's been a series of small steps forward. Bob Woodruff, who apparently wasn't this guy, took over the reins at Florida after three years at Baylor, and he improved them from okay to solid. He gave them stability, at least. Instead of winning 3-5 games per season, they won 4-6 for most years under Woodruff, though in the brutal SEC, that wasn't bad. His tenure peaked in 1952 with an 8-3 season and Florida's first bowl appearance (appropriately in the Gator Bowl) and a No. 15 final poll position. From 1957-59, Florida never won more than six games but finished ranked at the end of each season thanks to the rough schedule. Also Florida's athletic director, he gave way to Ray Graves after the 1959 season, then ended up serving as Tennessee's athletic director for over 20 years.

Woodruff took the Florida football program a step forward, then Graves did the same. Florida began to win 6-9 games per year in 10 seasons under Graves, went 9-2 in 1960 (with another Gator Bowl win), went to the Sugar Bowl in 1965, went to the Orange Bowl in 1966, and finished his run with a 9-1-1 season and another Gator Bowl win in 1969. In his decade in Gainesville, Florida went 70-31-4 and went to five bowl games. Plus, Graves brought eventual Heisman winner Steve Spurrier to campus and approved the design and use of what would become Gatorade in the mid-1960s. Not a bad legacy.

Graves retired and, like Woodruff, remained as Florida's athletic director. His first act was to steal Tennessee head coach, and Florida alum (he played for Woodruff), Doug Dickey and bring him to Gainesville. His Vols had just won an SEC title and had gone 42-10-3 in the last five years, but he struggled with the Gators. After three iffy seasons (combined record: 16-16-1), Florida made their first of four straight bowl games; they even went to a Sugar Bowl in 1974 and finished second in the SEC in 1975. But he couldn't maintain traction, and after a 4-7 campaign in 1978, he was replaced by Clemson coach Charley Pell. Like Woodruff, he ended up as Tennessee's athletic director for almost two decades.

(It's worth noting that, even though Florida had never seriously challenged for a national title by this point, they were still prestigious enough to steal coaches away from Tennessee and Clemson.)

When Pell came to town, it started a process that was not unlike what Florida Basketball would also go through at the same time: win through shady means in the 1980s, clean up your house, then win even bigger (and cleaner) in the 1990s and 2000s.

A Bear Bryant disciple (and former all-SEC lineman at Alabama), Pell had gone 18-4-1 in two seasons at Clemson; his Tigers went 10-1 in 1978 and finished sixth in the country, easily their best finish to date. After a "hitting the reset button" season in 1979 -- Florida went 0-10-1 -- he immediately began putting together a fast, supremely talented squad. Florida went 8-4 in 1980 (and all but beat eventual national champion Georgia) with 28-year old offensive coordinator Mike Shanahan on staff. They went 7-5 and 8-4 in 1981-82, then broke through with a 9-2-1 finish (and No. 6 final ranking) in 1983. But the NCAA was beginning to sniff around. Three games into the 1984 season, with Florida 1-1-1, the NCAA announced that they had found evidence of 107 major infractions at Florida. One hundred and seven! (They later cut that total down to a more tidy 59.) Florida was banned from the postseason and live television for two years, and they were forced to cut 20 scholarships over a three-year period. Pell was dumped and replaced by former Penn State quarterback Galen Hall, who had replaced Shanahan as offensive coordinator. (Hall was new to the staff and therefore untainted by the infractions.)

Under Hall, things went in a similar direction. A great Florida team finished 9-1-1 in 1984, won the SEC (until May, when SEC university presidents stripped them of the title), and finished third in the country. They went 9-1-1 again in 1985 and finished fifth, but recruiting limitations quickly began to take effect. Florida went just 19-16 from 1986-88. Midway through 1989, however, with Emmitt Smith running wild and Florida preparing to re-enter the Top 25 at 4-1, Hall was fired for further NCAA violations. He evidently still denies the charges of wrongdoing -- paying a player's child support payment, etc. -- but it still got Florida slapped with another postseason ban in 1990.

Florida found itself unexpectedly in the market for another new coach after 1989, but ... I'm thinking they were alright with that.

1992-2001. It's taken him a while to get strong footing at South Carolina; and even now, his Gamecocks are not at the level that he established in Gainesville. But there was a time when Steve Spurrier might have been the best coach in college football. The man knew how to coach offense, he knew how to hire good defensive assistants, and he led Florida football to some serious, serious heights ... and without NCAA punishment, no less.

From there, it was on. The Gators finished 10-2 and seventh in the country in 1991, and over the next decade they would never finish worse than 12th. From 1993-01, Florida went 94-19-1. They won five conference titles in six years (1991, 1993-96), and more than almost any team before them, they proved you could win games by lining your guys up wide, then passing, passing and passing some more. (Of course, he also always seemed to have a spectacular running back or two as well. He didn't exactly struggle in recruiting.)

They cleared hurdles with regularity. Spurrier won his first SEC title in 1991, then won his first Sugar Bowl (and pulled in his first Top 5 finish) in 1993. In 1995, they made the de facto national title game (the Fiesta Bowl versus Nebraska), and in 1996, they won their first national title. They would finish in the Top 5 three more times in the next five years before Spurrier famously got the itch to coach in the NFL following the 2001 season.

Jeremy Foley has been Florida's athletic director since 1992; he was either an Assistant or Associate Athletic Director for 12 years prior to his promotion as well. In building what is truly an incredible athletic department, he has made very few poor decisions when it comes to hiring coaches. He indeed made one, however, when he brought in New Orleans defensive coordinator Ron Zook to replace Spurrier in 2002. Zook had been Spurrier's associate head coach in 1995, but he had spent six straight seasons in the NFL. Still, he's a charismatic guy and, clearly, a great interview, and he snagged the job. He continued to recruit quite well, but for three straight years he had basically the same season: Florida finished 8-5 and 24th in the Coaches' Poll in 2002, 8-5 and 25th in 2003 and 7-4 (when he was fired) and 25th in 2004. That is certainly decent, but it wasn't good enough to follow a legend. Zook was quickly dumped and replaced for the closest thing to a sure thing: Urban Meyer. And it was quickly like the Zook era had never happened.

You probably know quite a bit about Meyer's tenure, eh? He went 9-3 in his first season in Gainesville, then unleashed hell. Florida went 13-1 in 2006, 2008 and 2009, won two national titles, introduced the world to the legend of Tim Tebow, and, in his first five seasons, never finished worse than 13th in the country. His Gators needed some luck to sneak into the 2006 BCS Championship (they were fourth in the polls heading into championship weekend, but USC lost a shocker to UCLA, and the Gators sneaked by idle Michigan into the No. 2 spot), but once they were in the title game, they left no doubt about whether they belonged. They endlessly harassed Ohio State quarterback (and Heisman winner) Troy Smith and bolted to a 41-14 win.

Cracks began to show when offensive coordinator Dan Mullen left following 2008, however. Florida still went undefeated in the 2009 regular season, but they looked less explosive in doing so and got smoked, 32-13, in the SEC title game. Following Tebow's departure, his offense began to look even more listless. Florida finished just 8-5 in 2010, and a tired Meyer retired to spend time with his family take a few months off, work a season with ESPN, then take the Ohio State job. He was replaced by Texas defensive coordinator Will Muschamp, who hired Charlie Weis to run what ended up being an even worse offense. He was bailed out by Kansas' hire of Weis, and he heads into 2012 with a new offensive coordinator: former Boise State coordinator Brent Pease.

Florida has taken an odd approach with retired numbers. At one point, both Spurrier's No. 11 and Scot Brantley's No. 55 were retired, but when Spurrier took over as head coach, he put both of them back into the rotation. It's just as well, though: by this point, Florida has had spectacular players at nearly every position, and it would be hard to know where to draw the line. You've got quarterbacks like Spurrier, Danny Wuerffel and Tebow. You've got running backs like Fred Taylor, Emmitt Smith and Errict Rhett. You've got receivers like Cris Collinsworth, Carlos Alvarez, and Ike HIlliard. Youv'e got linemen like Jack Younblood and Trace Armstrong, linebackers like Wilber Marshall, Jevon Kearse and the aforementioned Scot Brantley, and an endless supply of defensive backs (Lito Sheppard, Bruce Bennett, etc.).

Ben Hill Griffin Stadium is part of a growing and gorgeous Florida athletic complex, across the street from some frat houses. Fifty years ago, it held 46,000 people; now, it holds 88,548. It was called Florida Field from 1930-89 but then added the name of alum, benefactor, politician and citrus grower Ben Hill Griffin, Jr. 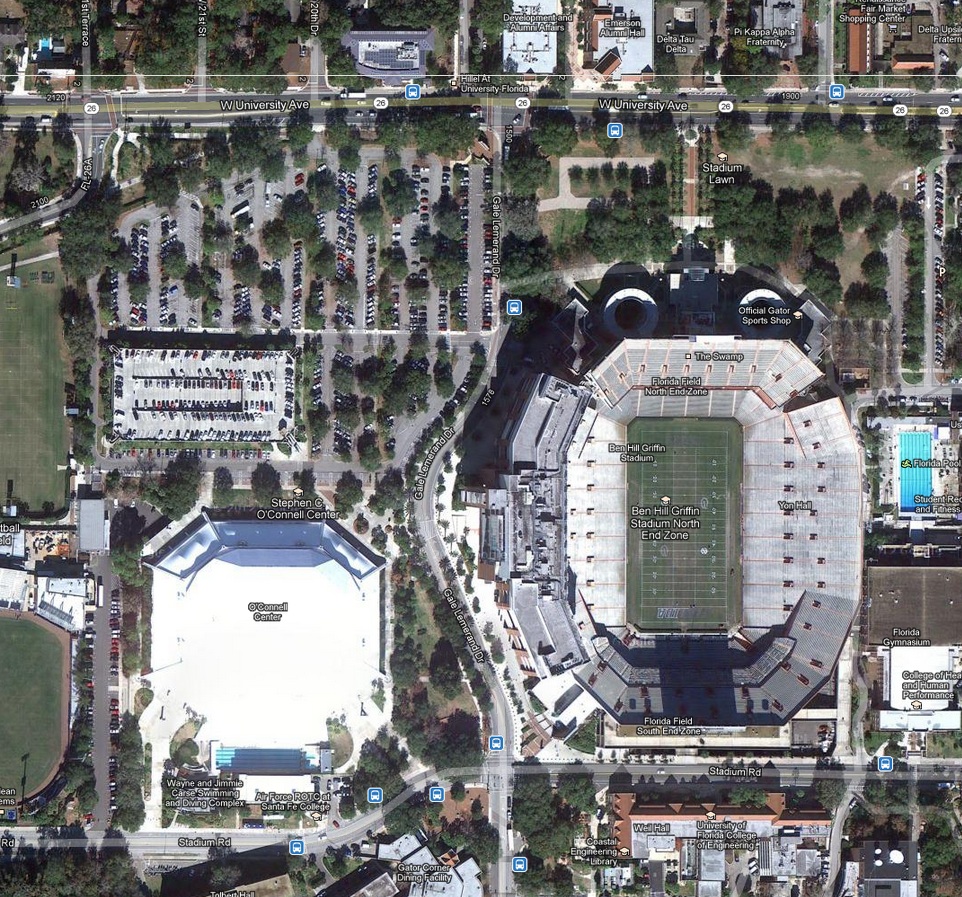 Undefeated again, baby. We should have joined the SEC a long time ago.