Mizzou Moves To The SEC: If South Carolina Can Make It There...

Share All sharing options for: Mizzou Moves To The SEC: If South Carolina Can Make It There...

It's time for the Battle Of Columbia(s)! 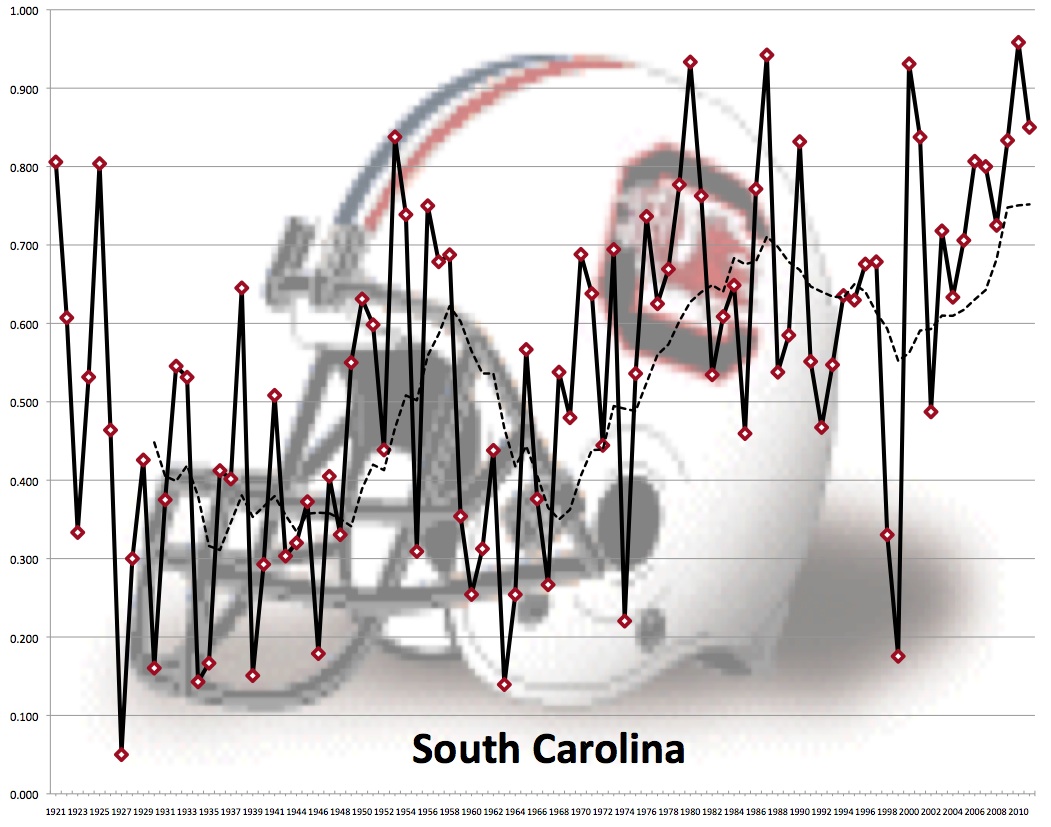 South Carolina's Percentile Performance Since 1921 (according to S&P+ and Est. S&P+).
The dotted black line is the school's ten-year average.
For more on Est. S&P+, start here.
(Original helmet photo via NationalChamps.net)

Before they were in the ACC, South Carolina was 0-8 all-time in bowl games and had finished in the final AP poll just three times (1958, 1984, 1987), never in the Top 10. At one point, they went 75 years between eight-win seasons. If the Gamecocks can make in the SEC, so can Missouri. And by all means, it appears South Carolina is making it in the SEC.

1927-36. Despite a general lack of success overall, and despite only recent SEC membership, South Carolina shares a somewhat similar early history to quite a few SEC peers: stink for most of the first half of the 20th century, then pull it together in the 1950s. The Gamecocks were reasonably successful in the Southern Conference in the 1920s -- they went 20-10 from 1924-26, outscoring Clemson 60-0 in this span and allowing just 27 points in 1925. But when Branch Bocock left following the 1927 season, things went sour. Harry Lightsey took over in 1927 and went 4-5. Billy Laval was hired in 1928 and put together decent records while beating absolutely nobody. Over the next decade, the Gamecocks would go 11-30-5 versus teams that finished with a winning record and 41-16-2 against teams that didn't. After seven years with Laval, Don McCallister went 13-20-1 in three years (1935-37), then Rex Enright came to town. He saw little pre-war success -- Carolina went just 17-27-4 in five seasons -- but after the war, the program thought enough of him to bring him back.

A former Notre Dame (and Green Bay Packers) running back, Enright spent 10 more years in Columbia after the war and enjoyed success in spurts. His team went 11-5-1 in 1946-47, and after a few down years, they went 13-7 in 1953-54 in the newly-formed ACC, finding themselves briefly ranked in both years. He retired for health reasons, and the Rex Enright Athletic Center is now named after him. Enright hired 31-year old Warren Giese as his replacement. Giese led the 'Cocks to two 7-3 seasons (1956, 1958), and Carolina finished in the AP polls for the first time, coming in at No. 15 in 1958. But after a poor 1960 season (3-6-1), he was replaced. He would become a Physical Education professor at the university and, eventually, a South Carolina state senator.

From there, the success was spotty. Marvin Bass went just 17-29-4 in five seasons and was replaced by coach Paul Dietzel, who had left a great LSU program to revive Army, failed, and landed in Columbia. He didn't do too much better -- Carolina made the Peach Bowl in 1969 and found itself briefly ranked in both 1970-71, but his tenure ended in 1974 after three losing seasons in five years. Jim Carlen took over and did a little better -- in seven years, they were ranked for parts of four seasons and went to three bowl games; Carlen also brought George Rogers to town. Rogers rushed for 1,781 yards in 1980, won the Heisman Trophy, and had his number retired at halftime on Senior Day 1980. He gained at least 100 yards in each of his final 22 games as a Gamecock, which ... wow.

Morrison was replaced by Appalachian State head coach Sparky Woods, who led the Gamecocks into the SEC but never got traction. Carolina won six games in each of his first two seasons, but his tenure ended after just 13 wins in three seasons; he went just 5-11 in conference play in two SEC seasons. Florida State offensive coordinator Brad Scott took over, but he didn't last long either. Carolina went 7-5 in his first season and finally pulled in their first bowl win (24-21 over West Virginia in the Carquest Bowl) ... then went 15-17-1 in the next three years ... then went 1-10 in 1998.

The program was in bad enough shape at the end of the Brad Scott era that not even Lou Holtz could do anything about it at first. Holtz had retired from Notre Dame following the 1996 season, but after two seasons of rest, he landed in Columbia and promptly went 0-11 in his first season. But for all of his negative traits (in the 1970s, Holtz was every bit the job hopper that Bobby Petrino was, only he had a much more forgivable public persona ... and didn't ride motorcycles), Lou Holtz could coach. He engineered a 7.5-game turnaround in 1999, going 8-4 and pasting No. 19 Ohio State, 24-7, in the Outback Bowl. In 2001, he did it all again; the Gamecocks went 9-3 and once again beat the Buckeyes in Tampa. They finished 13th in the AP poll in 2001, their second-highest poll finish ever, behind just 1984.

2002-11. Holtz's success was short-lived, however. His bag of tricks was evidently empty following 2001, and South Carolina went just 16-19 in his final three seasons. He retired for good following the 2004 season (in his final game, South Carolina and Clemson got into a nasty brawl) ... and then the Ol' Ball Coach came to town.

It is quite possible that Steve Spurrier is the greatest coach in the history of two different SEC East programs. You could certainly make a case for Urban Meyer at Florida (Meyer won two national titles to Spurrier's one), and you could make a case for Holtz, Enright or, possibly, Morrison at South Carolina. But wins are wins, and Spurrier has racked up a lot at both places. Following an ill-fated sojourn to the NFL coaching ranks, Spurrier returned to college football in 2005 and immediately made something out of Holtz's scraps. With a new offense, a new quarterback and a new running back, Carolina went 7-5 in 2005, losing to some no-name team in the Independence Bowl. It took Spurrier a little while to do much better than that -- they went 8-5, 6-6, 7-6 and 7-6 over the next four years -- but the program took a demonstrable step forward in 2010.

By 2010, Spurrier had begun to compile quite a bit of blue-chip talent. He still hasn't recruited as well as he did in his Florida days, but he's gotten somewhere. With freshman running back Marcus Lattimore and sophomore receiver Alshon Jeffery lined up wide in 2010, South Carolina beat No. 1 Alabama, 35-21, on October 9, won at Florida in November, and won their first ever SEC East title. They finished just 22nd in the polls following losses to Auburn (in the SEC title game) and Florida State (Chick-Fil-A Bowl), but it was still a tremendous breakthrough. And in 2011, despite quarterback issues (Stephen Garcia officially went off the rails) and an injury to Lattimore, the Gamecocks won 11 games for the first time in their history, going 11-2, whipping Nebraska in the Capital One Bowl and finishing ninth in the country. They might not have been quite as good as their record -- they were 4-1 in one-possession games, and their F/+ rating was actually higher in 2010 -- but it's clear Spurrier has made serious progress in the last two years.

Like Missouri, South Carolina has retired more jerseys than quite a few more successful programs.

#2 Sterling Sharpe (1983, 85-87)
Sharpe, wore #2, is the school's all-time leading receiver with 169 catches for 2,497 yards and 17 touchdowns. Sharpe had his jersey retired following the 1987 regular season. He became only the second Gamecock to have his jersey retired while he was still active at the school. In fact, both Sharpe and George Rogers played in the Gator Bowl in their final collegiate game. Sharpe was a number one draft pick by the Green Bay Packers.

#37 Steve Wadiak (1948-51)
Wadiak wore #37 for Carolina and was the first to have his number retired after a tragic automobile accident claimed his life. Wadiak, who still appears throughout the South Carolina record book, was the school's all-time rushing leader for 28 years after his senior season.

#38 George Rogers (1977-80)
Probably the school's most well known player was also USC's Heisman Trophy winner - George Rogers. He had his #38 retired during halftime ceremonies at Carolina's final 1980 home game. Rogers was the first USC player to have his jersey retired while still active at the school.

#56 Mike Johnson (1964)
Center Mike Johnson, #56, became gravely ill before the start of his junior season, and the illness cut short a potentially great football career. Johnson had finished his sophomore campaign as the regular center. When he died in 1965, his number was retired.

Williams-Brice rises out of a sea of concrete next to the South Carolina State Fairgrounds, separated just a bit from the university campus. It held 54,000 three decades ago, it holds 80,250 now, and it held 85,000 for the 2001 Clemson game. Season tickets have been sold out for each of the last seven seasons. It hosted a visit from the Pope in 1987, it hosted the filming of The Program in 1993, it hosted the Rolling Stones in 1994, and now it hosts a pretty damn good football team, too. 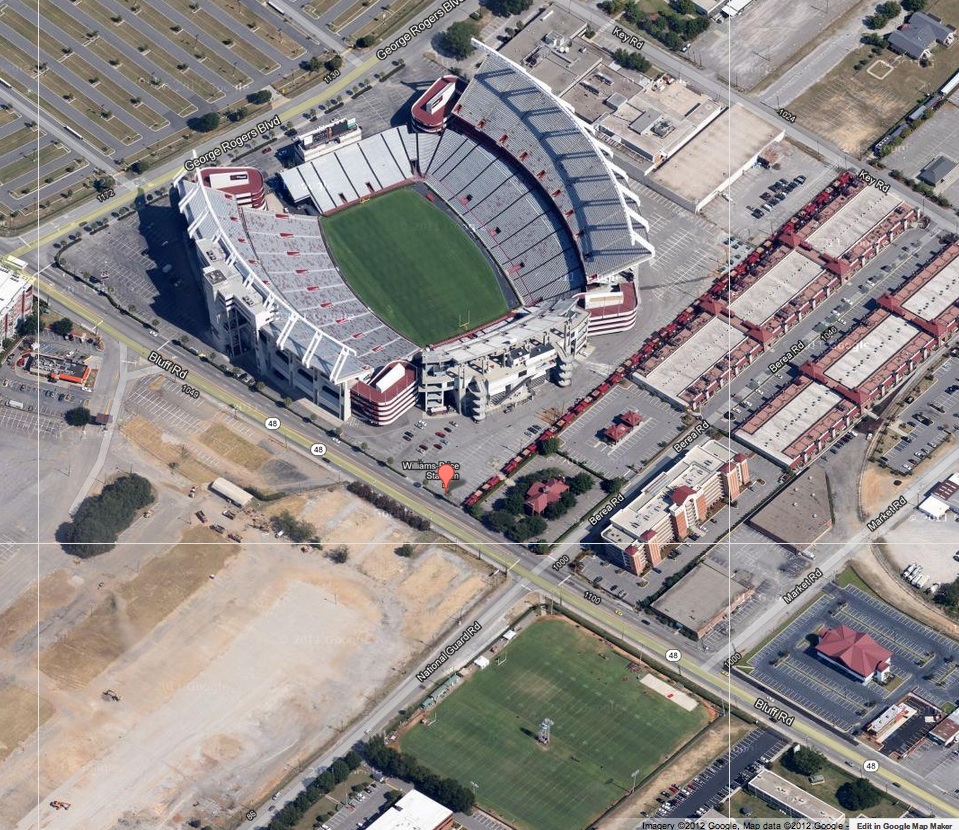 South Carolina sets a scoring record against Clemson. (Strangely, they share a bitter non-conference rivalry. Didn't realize that was allowed.)
1980 Heisman winner George Rogers
Clemson and South Carolina get after it in 1983.
Carolina caps a 10-1 regular season with a 24-23 win over Clemson.
Carolina finishes off its first huge SEC win, a 24-23 upset of Tennessee.
Carolina fans show up in droves for the 2001 Outback Bowl
Clemson and South Carolina get after it in Lou Holtz's final game.
Alshon Jeffery destroys Alabama in 2010
Marcus Lattimore destroys Georgia in 2011.
Just give up, Taylor Martinez.
(Full 2012 Capital One Bowl here.)

View their statistical profile here. Spurrier has some rebuilding to do on the defensive side of the ball, but he does get Marcus Lattimore back.

Another series lead. Seriously, Missouri should have joined the SEC a long time ago...