Mythbusting The SEC: Defense, Dominance And The Draft

Share All sharing options for: Mythbusting The SEC: Defense, Dominance And The Draft

We’ve all heard about that ferocious SEC talent. How will Missouri deal with the speed of the SEC? How will they hold up to the physical style of play? The linebackers weight 300, the cornerbacks weigh 250. And offensive tackles don’t see the field unless they run a 4.3 forty yard dash.

There seem to be two schools of thought about Mizzou in the SEC. The first I’ll call the Les Miles "Strap it up" school of thought, as if we have no idea what we are getting into. This is perhaps best characterized by college football commentator Paul Finebaum’s quote that Mizzou is "going to get stomped" in the SEC. But Finebaum’s a douche trying to scream the loudest so people will pay attention, and ESPN is just egging him on so people will watch in the offseason.

More revealing is ESPN SEC blogger Edward Aschoff’s question to T.J. Moe about whether we were ready to deal with the speed of SEC receivers. Ummm, yeah. We might have seen a receiver or two in the Big 12. 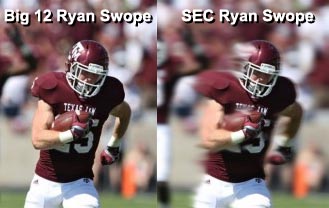 Preseason all conference receiver Ryan Swope experienced a significant upgrade in speed when he joined the SEC.

So I set out to see who is right. Is Missouri’s offensive line too small and about to be chewed up and spit out by man-eating defensive ends that weigh 300 pounds and run a 4.4? There are many ways to measure talent: recruiting rankings, stats, and more. But the most impartial way I could think of is to see how many players go on to the next level. More specifically, the last 11 NFL drafts.

Using the draft to define talent does have shortcomings. Chase Daniel was one of the top few college QBs in the country but went undrafted. And as you’ll see below, most talent doesn’t mean most championships. But I do think it’s a good measure of, particularly, athleticism. The NFL really loves big and fast players, and will often draft a guy with good physical measurable over a guy with big stats.

With this information, I have tried to answer the key questions about what Mizzou can expect this season in terms of talent and athleticism.