Mythbusting The SEC: 3. Is The Talent Advantage Only At Certain Positions?

Share All sharing options for: Mythbusting The SEC: 3. Is The Talent Advantage Only At Certain Positions?

3. Is the talent advantage only at certain positions, notably the defensive line?

No, the SEC has the most players drafted in four out of six position groups (excluding special teams). They are third in offensive linemen and, interestingly enough, linebackers. 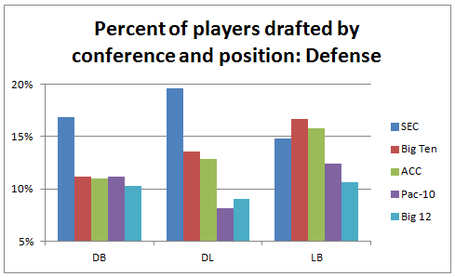 Note the dominance at DB and particularly D-line

However, the SEC talent is most dominant at two positions. Defensive back and particularly Defensive line. So while the SEC advantage is nearly across the board, the reputation for vicious defensive lines is well deserved. The top two teams for D-linemen (and four of the top 10) are in the SEC.

Here’s an interesting sidenote. Lots of D-linemen are drafted, but from relatively few schools. For instance, DBs and WRs are drafted in about the same numbers and DL’s, but from 50% more schools. That would lead me to believe that such talent is easy to identify. You don’t have to be a genius to see 6’6", 280 and fast. 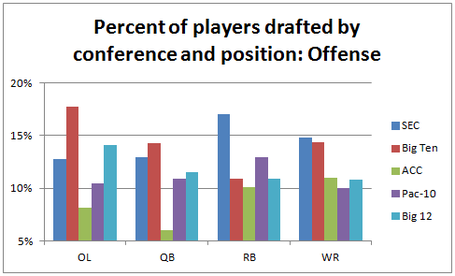 The SEC also leads in RBs and WRs, and while they are not No. 1 in OL and QB, they are near the top. Which leads to the next question. Does the SEC put their best players on defense while others put their talent on offense?