Mythbusting The SEC: 4. Does The SEC Put Its Best Players On Defense?

Share All sharing options for: Mythbusting The SEC: 4. Does The SEC Put Its Best Players On Defense?

4. Do SEC teams put their best players on defense?

Yes and No. As we saw before the SEC breathes fire at nearly every position (sorry guys, when in Rome…). But we do see some bias toward defensive line and defensive backs. And we also see a falloff at other positions from what we would expect.

For example, if the SEC has 16% of all players drafted, then over time you would expect that to be 16% at any given position. After all, athletes aren’t born linebackers or running backs depending on where they live. So any significant differences should be attributable to the choices of young people with whether to play football, and at what position.

At the risk of oversimplifying things (for instance, WRs tend to be taller than DBs) there are really three main types of football players:

If we compare actual vs expected at each group for the SEC, we see that SEC really does have a bias toward putting their best players on defense. 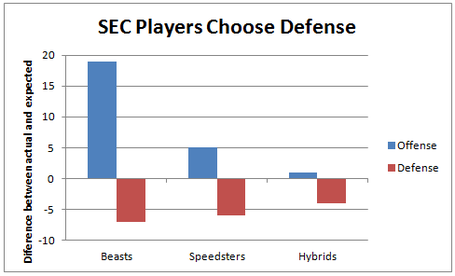 Now, this doesn’t look like much, and it’s not a huge difference. Only seven players played on defensive line instead of offensive line over 10 years? Who cares, right? My argument would be that this slight advantage is the difference in tight games. It’s why Florida beats Oklahoma and why Alabama beats Texas. That one or two elite players a year make a small but important impact on a game. After all, who thinks Auburn wins the national title over Oregon if Nick Fairley is at left guard? And of course, it doesn’t account for quality college players that go undrafted.

Interestingly enough, this does not apply to the Linebacker/Running Back comparison. My guess is that running back in a running league is prestigious enough to retain the top athletes. And in case you were wondering, yes, the opposite does apply to the Big 12. More top players play on offense.